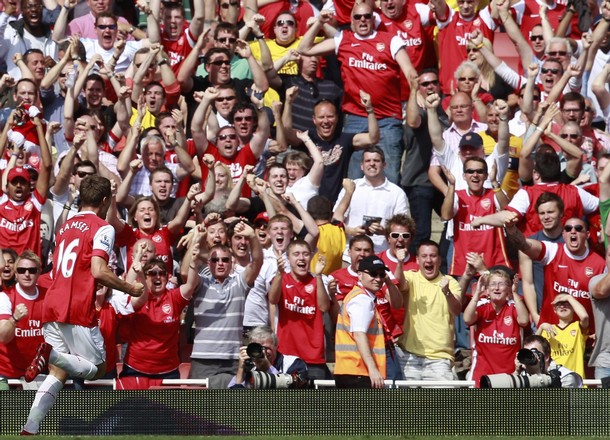 Ivan Gazidis has revealed that he is in favour of Arsenal exploring further the possibility of incorporating a safe standing area at the Emirates.

Speaking at a question and answer session with the Arsenal Supporters Trust the Gunners CEO stressed that it was right for a debate to take place about the return of terracing so long as it did not compromise the safety of spectators.

“It is something that I have always been open to,” confirmed Gazidis.

“The more I learn about it, the more complex an issue it is, but viscerally it is something that I find attractive because it gives fans, a certain group of fans who like to stand who create the atmosphere, another way to be in our stadium.

“Why would you be against that, if you can do it safely?

“There are some issues, some very practical issues around safe standing; the rake of the stands and so on, that may make it cost prohibitive if it is not designed into the stadium at the beginning, but it is not something I am close minded to and I am prepared to explore it.”

Terraces were banned following the Hillsborough disaster in 1989 and all-seater stadia became compulsory in 1994 for all top flight sides. Over the course of the last eighteen years the enforced changes have been credited for the increased number of women and children attending matches and for a marked drop in hooliganism.

Despite all-seated arenas largely being labelled a success fans have continue to call for specially designed standing areas to be re-introduced with a view to improving match atmosphere and to open up cheaper tickets for fans.

In March the Football Supporters’ Federation launched an online petition calling for the return of standing areas in the top two divisions although it was met with opposition from the Premier League.

To watch a video of Ivan Gazidis answering questions from the Arsenal Supporters Trust, click here.

I don’t want that! I’m not a fuckin northerner supporting a league 1 side. No way. Standing up like a cunt for 105 minutes and all you can see is the back of some arsehole’s head. Nah

How long have you been going to football? Until Hillsborough there was a choice for each and every football fan, Buy a seat and sit in “comfort” or stand and be part of a great atmosphere. Standing doesn’t mean 105 minutes, I remember getting to Highbury an hour before kiskoff and “bagging my spot” in the North Bank, centre behind the goal and in front of a crush barrier. Where I was standing by the end of the match, especially a really good game, was another matter because the crowd was a living, moving mass of humanity and you just… Read more »

So if u don’t like it don’t do it, no one is talking about turning the whole stadium into all terracing, what’s being talked about is veriety for the consumer, and I for one think that is a great thing! I am old enough to remember terraces at football grounds and trust me it was a completely diferent experience, and one that I would luv to return to.

I seem to recall they had standing at the grounds down south too, but that was before 1992 when Sky properly invented football. I’ve never had an experience sat down at a ground that can compare to standing in the Clock End. If you limit the number allowed into a terrace it can be done safely. At least you can move if you don’t like the miserable sod next to you, imagine being sat next to Stoph for 105 mins.

The one thing that might get me really enjoying my football again. I don’t go so often now and every time I do I leave longing for the terraces to return.

I think bringing back safe standing (behind the goals) would definitely improve the situation but is the lack of atmosphere really all down to supporters being seated? Even an all-seater Highbury would generate more noise and support than now.

I’ve been to games at the new ground where “fans” turn round looking at me like I’m crazy when I chant and sing. Why? I feel embarrassed by home games these days and the audible mass groan. Are the match day crowds doing enough to get behind the team?

I have started feeling self conscious at the grove because if you start to sing you are in a minority. I am amazed that so many people will pay big sums of money but seem so passionless.

I’ve never had the chance to go to the grove as of yet and I’m disapointed to hear it is embarrassing to chant. Well bollocks to that, there gonna have to throw me out before I stop singing! (when I get the chance to go that is)

Would be great, the Atmo at the Grove is shocking. And it transmits to the players, its no suprise that we performed much better on our travels last season. When we need to push on and find a goal the vast majority of the stadium is either silent or groaning. Contrast that to the intimidation teams felt at Highbury or some or the good grounds around at the moment. The stadium was rocking for the big games against Barca so there is no excuse for why it shouldn’t be when we need to hold onto a result against Stoke/Wigan etc..

Just turn the two areas behind the goals into terraces and pay at the door to get in. Ram everyone in and it would be mental, I hope. I’ve never been on a terrace but it definitely needs to come back. Nothing more annoying than when you’re there, singing and standing, and the noise suddenly pathetically dribbles out and everyone sits down.