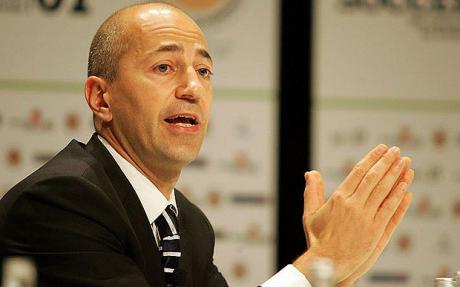 Arsenal’s chief executive, Ivan Gazidis, has told fans and shareholders that Arsene Wenger has the full support of the board and new owner Stan Kroenke.

Gazidis was speaking to members of the Arsenal Supporter’s Trust at an ‘end of season review’ meeting. When asked on what basis the club might consider a change of management, he replied “We 100% support Arsene. He’s done a remarkable job in competing with clubs with greater revenues”.

Wenger has been under intense pressure after another campaign ended without a trophy and the team, which was competiting on four fronts, crumbled after the Carling Cup final defeat to relegated Birmingham City.

Gazidis also confirmed that the manager was currently looking at making signings to strengthen the squad and said there would be a ‘turnover’ of players. However, he refused to name individuals in either case for fear of feeding a media frenzy, saying only that we would be ‘busy’.

Gazidis should be very careful how he words his defence of Wenger. There aren’t many clubs with greater revenues than us, however there are many with greater resources (available money to spend).

Gazidis out. Wenger out. Tits out.

You want to get yourself out, after Gazidis and Wenger?

So is this the last chance saloon for Wenger? I really hope we win something in the season ahead cause I like the boss but this has to be it.

What are guyz on? Really

Back down all you trolls!

Anyways. I just wanna say … Gazidis looks baked out of his mind in this photo.

I think you’re the one that’s baked.

[…] said that the manager had the 100% support of the board, which I think we already knew. What was interesting was when pressed on what might precipitate a […]

Get ya tits out Johnny.

My problem with Gazidis is that we haven’t seen much improvement in commercial marketing deals. Arsenal spend loads of money on backroom staff and were not seeing the fruits of it. They tell us we make profits every year but instead of spending it on a Sahko and Hazzard, we spend it on executives and teenagers.

We need a big centerback who can run and a player who can be creative and score goals. Sahko and Hazzard.

Get our marketing money up above Liverpool, Mr. Gazidis and then we can spend all the money we want.

It’s tough – most of our commercial deals were locked in place long before Gazidis’ arrival and the contracts run for several more years. I agree that we should be looking for additional sponsorship opportunities, but the big ones like uniform supplier, shirt sponsor and stadium naming rights are all but out of Gazidis’ control. Buying our way out might be a good idea, but it’s hard for us to tell if that would be profitable.