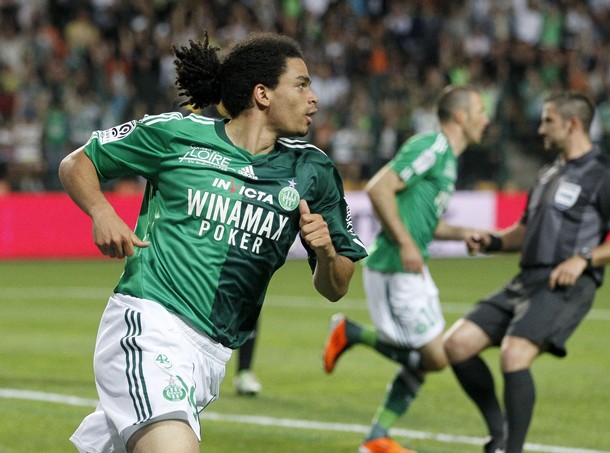 St. Etienne striker Emmanuel Riviere has revealed he is “flattered” to be linked with a move to Arsenal this summer.

Riviere, 21, is a highly rated forward who has drawn comparisons with former Arsenal legend Thierry Henry in the French press.

The frontman helped Les Verts to a 10th place finish in Ligue 1 last term scoring 8 goals, and has since been linked with the Gunners and Premier League rivals Liverpool.

“If Arsene Wenger is interested in you it means you have potential to be a very good player.

“People compare me to Thierry Henry, and that is a big compliment. If I can achieve half of his career I will be happy.”

Having seen Rivière play I don’t think he would make a bad signing for the right price. Pace, skill and can shoot too. Bags of potential but more suited to a 4-4-2 I think. If we could also land Gervinho we would have a much more threatening front line.

Is it just me, or do we have some kind of strange fetish with the name “Emmanuel”? Just sayin’ 🙂

I like this guy, he’ll be a realistic target for Arsene in terms of Price and ability, although he’s only played in ligue 1 and youth level internationally, I believe he could well fit into the arsenal team and become a real talent, he has the determination and ability. I want as much as any arsenal fan for us to sign players like Benzema, Falcao, etc… etc… but this guy could make a name for himself with us.

Hmmm. Arsenal won’t be doing themselves any favours if he’s our attacking signing. I worry for the manager and board if we only sign under 21s.

Some of the hype surrounding Big Benz at the moment is very flattering. I’m a big fan of his, especially because he is the key striker for the French National Team, but he’s probably closer to Bendtner in quality than he is to Van Persie.

I’ve only watched Riviere play once, for the U-21s, and he scored a double, so I like him.

Benzema everywhere, Gush! Why should we buy him when Bendtner could not get much game? This is much like the African proverb, “selling your dog to buy a monkey”.