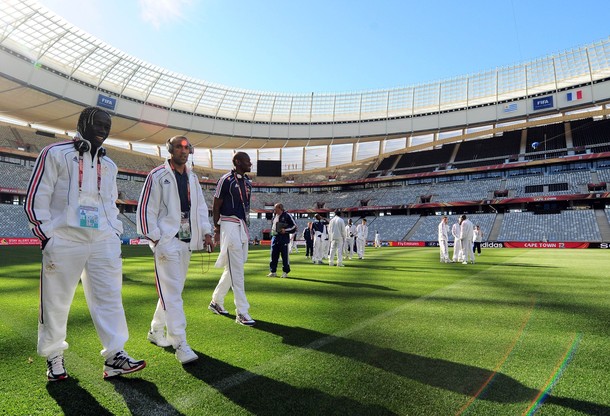 According to a report in the Daily Telegraph, Gael Clichy is a £7 million target for Manchester City.

The French international’s list of suitors appears to be growing on an almost daily basis with Roberto Mancini’s side joining Paris Saint-Germain, Liverpool and AS Roma as a possible destination.

The Citizens have struggled to find a suitable long-term candidate for the left-back position since their takeover by Sheikh Mansour Bin Zayed Al Nahyan. Wayne Bridge was signed for £10 million from Chelsea in 2009, Alexander Kolarov cost £16 million from Lazio while Joleon Lescott’s move from Everton cost upwards of £22million.

Clichy, 25, is thought to be stalling on a new deal at the Emirates despite Arsene Wenger publically stating his desire to keep hold of the energetic left-back. Leighton Baines and Jose Enrique have been tipped as possible successors with reservations lingering over the long-term suitability of young duo Kieran Gibbs and Armand Traore.

Not bothered about that one. Clichy can go to whoever is going to pay the most cash. I’d quite like to watch Theo getting in behind him next season. (That sounds unintentionally dirty.)

The grass is not always greener on the other side Gael. Adebayor is the prime example of why you should not to man city!

While he didnt have a good time at city, he done well at real Madrid, no?

Yes he did somewhat well at Real……but they deem him surplus for the coming campaign….next stop somewhere in Moscow or Siberia!! hahahaha!

Please let it happen. Enrique would be a fine replacement.

Savage is a Dave
Reply to  Louie

Can we not go for Baines instead?

Clichy is far to inconsistent to be considered for a team wanting to win the league. May fare better in Italy. This is a LB who struggles to defend and his hardly an asset in attack. Enrique would be a much better replacement but I’m still a fan of Kolarov. Could really come into his own at Arsenal. Not incredibly fast but knows how to pass and deliver and not bad at set pieces either. I say this all based on his performances for Lazio when he was being chased by Real and Inter of course.

I like Clichy, and I really think he’s better than everyone says he is, which may be why he wants to leave. The fullback spots at Arsenal are not easy to play, and he’s further hindered by Sagna being the picture of consistency on the other side of the pitch. That said, I just can’t get past the high profile errors he makes. So I’d be sad to see him go, but not if we bring in someone better. On a side note, he deserves our gratitude simply because he’s stayed out of the press. I cringe every time I… Read more »

You know what will happen then the rest of the quality Van Persie and co.will want away not wanting to play with dross.

On another subject, what is the emoticon for an eye roll?

Makes a change should be called ArseCity, Toure, Viera, Ade and now clichy! They can have our unwanted ****!

If the club really wanted Clichy to stay then why did they let his contract run down to the final year? Same goes for nasri, the club has to take some of the blame for allowing two members of it’s first XI to run down there respected contracts

Daz – True – but what hapens if they have tried and tried but could not come to an agreement! The word is he wants Cesc’s place and has been waiting to find out what the situation is before he makes a decision. Plus he wants +£90k a week wages which is a joke!

Being a selling club sucks. I now know what it’s like to be a Tottenham fan, without being an utter cunt of course.

Sounds like nonsense to me. Citeh already have two left backs in Kolarov and Zabaleta. The only reason any players are linked with Citeh these days is to drive up the asking price for them, or to engineer a raise. However, if Clichy does join the blue half of Manchester, that will be the end of his progression as a player. Have a look at other players of similar age and potential: Milner, Barry, Adebayor, Lescott, Dzeko, etc. They’ve all either gone backwards or stopped in their progression. And, if we’re going to sell Clichy to a rival, let’s be… Read more »

Savage is a Dave
Reply to  Badaab

“Why not demand David Silva in return?…” Because we are being laughed at enough as it is without giving everyone more ammo.

Tevez is unsettled, and that’s the last thing we need at Arsenal right now with our already rafts full of unsettled players.

He can fuck off for all I care. Spend some money on Baines and it wouldn’t be a bad idea.

If we got Sahko from PSG we would solve our problems. He is built like Sol Campbell and he is athletic enough to play left back. If Gibbs got hurt or we were playing a big physical team we could put Sahko at left back and we’ve got Djourou and Vermaelen inside. Perfect.

meh can’t say i give a shit…. on his day, best LB in the league. he’s pretty average in the other 37 games though