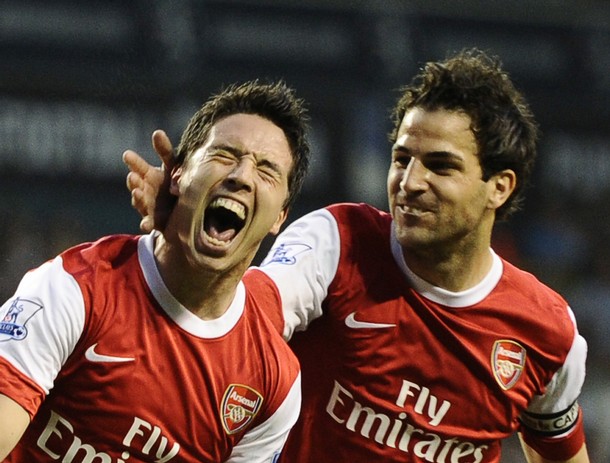 According to Italian publication Corriere dello Sport, AC Milan CEO Adriano Galliano travelled to Paris yesterday with a view to sounding out a possible move for Samir Nasri.

The newspaper claims that the trip to the French capital has echoes of one made in 2008 when officials from the Italian side sealed the free signing of former Gunner Mathieu Flamini following negotiations in a private room in Paris Orly airport.

Milan are understood to be analysing several possible midfield targets having given up on trying to sign Marik Hamsek from Napoli and Ganso from Santos.

With only one year left on his contract at the Emirates it has been suggested that Arsene Wenger cash-in on the former Marseille man this summer if the 24-year-old refuses to sign a new deal.

Manchester United have been heavily linked with Nasri since the end of the season, while Inter Milan are also supposed long-term admirers.

Well, if he goes there it’ll be the lesser of evils, though I must admit, if he did go to utd I would get a weird ‘Adebayor-esque to citeh -it’s all gonna go tits up’ feeling. Anyone else getting the sense today that Ade wishes he had never left? Nasri, you’ve been warned.

This is the most depressing summer of recent memory. All the new is about our players fucking off.

Put up our final deal to him and suggest that before he decides whether to accept or not, he goes home and looks up ‘Alex Hleb’ on Le Google.

When it was first suggested that Nasri would not sign a new deal, I figured the club most likely to be in for him would be AC Milan. They’re in need of a rebuild and can offer Nasri the opportunity to have the team built around him. Not many other top teams can offer him that. If I had to bet on a place Nasri would go if he left Arsenal, then AC Milan is it.

Great, so another club taps up another of our players.

That said Nasri is a faat ponce who is holiding the club to ransom so he should fuck off in my opinion anyway.

looneygooner
Reply to  Fed up of Barca

agree, he had a good first half season, then went pear shaped who can forget his miss against Bolton one on one with the keeper, fuck the greedy twat off, you don’t want to wear the red and white then go you disloyal piece of shit

I feel Nasri should show some class and loyalty. He has developed under Arsenal and Wenger and now needs to repay the club. I feel if Fab goes we cannot let another key player leave, however Nasri should be the one looking to sign and not hold the club to ransom. This is turning into a very delicate situation; one that all concerned could do without.

Nasri, sign a new contract and aim to become a gunners legend!

I think this all began with the Ashley Cole & Chelsea meeting. He should of been made an example of and left to rot in the reserves for the rest of his contract, which would of meant missing the world cup and champions league final in 06, which he then repaid us by refusing to play in a champions league qualifier in order to help his move to Chelsea. Maybe after 2 years in the wilderness without playing any football I doubt he would have got his desired move to chelsea. I think had that been done maybe other clubs… Read more »

That’s an interesting thought Graham. It’s amazing how things have changed now. The only club I could ever see sticking a player on the bench in such a manner is Man U but even they caved in to the incredibly overrated Rooney. – Also I completely agree with AROGNAUT. AC were my first bet. More so now due to Pirlo leaving. Ideally we could trade Pato despite him not having a great season. Ideally.

Nasri? 4 months of great football is not the best return. Sell him. Cesc, obviously gone. What really worries me is that we turned down a £10m bid for Diaby and apparently cant get rid of the likes of Denilson and Bendtner. They need to go because they are rotten. Having said that, will we replaced them sufficiently? Probably not, so either way, it’s not looking good. Bad times ahead.

If he has to go then it has to be anywhere but united. I’d like to see him stay and build on the promising start he had last year. But it seems that he’s after a bigger pay check and that can only mean a move away from the emirates

Dazz.. we dont wazz to see you anymazz

Based on our finish to the season it is clear that there is an apathy in the current squad. I for one do not want any player at the club if they are not 110% committed to the cause. The only thing that matters is that we don’t give these players away on the cheap. Cesc, so long pal, thanks for all that you gave and remember it well as you warm the bench back “home”. Arsene, if the current offer ain’t good enough for Samir “work in progress” Nasri then sell him to the highest bidder and reinvest in… Read more »

I would be extremely disappointed to see him go – particularly if it’s to a EPL rival, the guy when on form is a class act. However, he has only had one half decent season with us and like Adebayor feels that the club now owe him a huge increase in wages. I am fed up with the club being held to ransom by some of our players (past and present). Where is the loyalty that was shown by players such as Bergkamp, Viera, Pires, Freddie, Henry etc. Yes, I know that there were the annual rumours and that Henry… Read more »

Milan. Another club with the same view of class as Barca. Seen this comment on their OFFICIAL WEBSITE??

“Fabregas will not join us because he will join a different club” – Adriano Galliano.

Now is it me or do our players seem to attract more comment and tapping up than any others?

Doesn’t have to be nasty. “Galliano you are a knobmuncher. Thanks for your opinion now fuck off” should do it.

Maybe we should sell Diaby already, and use that cash to just pay Samir what he wants? While there are other midfielders in our squad, I kind of like the little temper Samir has (stepping on feet when the ref isn’t paying attention, etc.). Or perhaps we can offload Arshavin and use that money to reinforce Samir’s contract. I don’t understand why Cesc has to be the highest paid player in the squad when he has only played about 22 games a season for us the last two years. Like Blogs mentioned today on the front page… we need to… Read more »

I can’t even tell if you’re being serious.. the point is that this ISNT FM 2011

Jin, that’s a reference to the Tim Stillman column awhile back.
The point is, if we’re going to be like the other clubs and do our business in the public’s eye (which we basically are, regardless of what the club says), we should go ahead and pull the strings on some of these transfers already to end speculation.

I would rather see Nasri sign for Milan than go to Old Trafford.

I’d rather him stop acting like a twat and not leave at all. But yeah I get your point

This. Nasri has not said anything and everyone just assumes he is being a cunt. This is the biggest contract of his career, so naturally he’s going to take time to make a decision.

Fed up of Barca
Reply to  PJW

Ah come on man! Contract has been on the table for months, Nasri says ‘I’ll discuss it at the end of the season’ Well it’s now over a month since the end of the season and it’s still sitting there. I’d wager he was made a more than fair offer and has declined it because he wants more money. I agree you can’t believe everything you read but you got to admit, reading between the lines it seems he is clearly trying to hold the club to ransom. I for one don’t think I can cheer him on at the… Read more »

Has any player – since the cunting exception of Cuntly Cole – left us and gone on to win a trophy? Henry? Flamini? Helb doesn’t count.

Henry won a treble in 09 with a bunch of monkeys. so if a team paying for their trophies counts then yes he won a few

If we sell to Manure we are nothing more than a fucking feederclub.

[…] United are also interested, and there’s talk of AC Milan and Inter looking at him too, so obviously Arsenal have made his availability well known. It would […]

This thing of being a well run club and being an example to others sucks! Lets be “BAD” and win all the Trophies! We have been rebuilding since God knows when. Who needs another round of re-building or is “re-building” another buzz word in technical training! I’m just tired! Talk to Nasri and all our dependable players. Pay them well, sell the dead-wood and let Fabregas leave now….i don’t care if he goes to MANU! He is a distraction! Bring in experienced and tested players. We need them Yesterday!