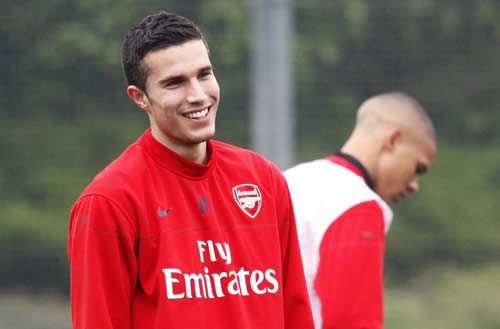 In a rather unnecessary move, Robin van Persie has released a statement via the Arsenal website to deny reports he’d launched a foul mouthed tirade against London rivals Chelsea.

The Dutchman was quoted as saying “Chelsea players are always bitching against the referees. I really cannot understand that. Just shut the f*ck up and focus on playing football”.

However, speaking to Arsenal.com he revealed hadn’t done any interviews, recently, saying, “These reports falsely suggest that I recently made negative comments about Spanish and Chelsea players, I would like to make it perfectly clear that I haven’t done an interview with Sport 1 or any other outlet in recent weeks and I’ve certainly not been rude as the comments suggest.

“I respect my colleagues of Spain and Chelsea and look forward to playing against them for many years to come. I sincerely hope that all football fans worldwide don’t take these misleading reports seriously.

“I wish you all a great summer!”

Conspiracy theorists might highlight the fact he said no interviews had been done ‘in recent weeks’ and there is some suggestion that these comments were made shortly after the Barcelona game in the Champions League.

Arseblog News prefers to think Robin is practicing for a career in diplomatic circles once his playing days are over. And we wish him a great summer too!

HAHAHAH
quite funny that Samsung are advertising on your site Mr. Blogs…

visit my web with videos, photos and satellite view of Chelsea Stadium: http://www.satelliteview.org/satellite/Stamford_Bridge_(stadium)