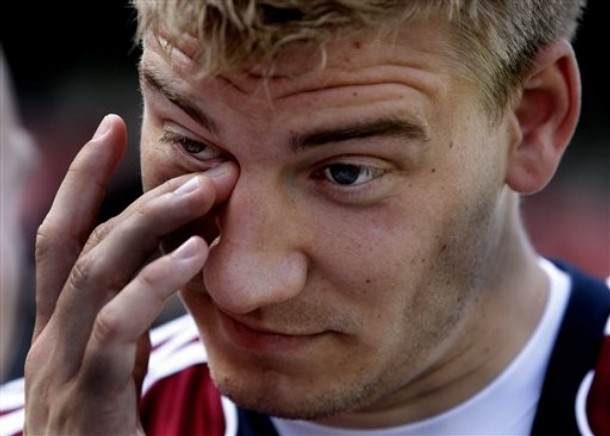 Arsenal striker Nicklas Bendtner has revealed that he would like to one day return to Denmark and play for FC Copenhagen.

The 23-year-old looks likely to leave Arsenal this summer after voicing his frustration at a lack of first team minutes and has spoken publically about his desire to test himself in a new environment.

While several clubs in Germany and Italy are thought to be eyeing the lanky hitman, Bendtner told homeland publication BT of his dream to play again in the Danish capital.

“I have always wanted to play for FCK, ever since I was a child.

“But I left the club for Arsenal when I was sixteen and have therefore never tried it.

Bendtner moved to Arsenal as a 16-year-old and was a prolific force in the club’s academy and reserve sides before he broke into Arsene Wenger’s starting XI. Despite being tipped for a bright future with the Gunners, injury and the form of his teammates have often forced him to accept a position on the substitute bench or seen his coach deploy him on the right side of midfield.