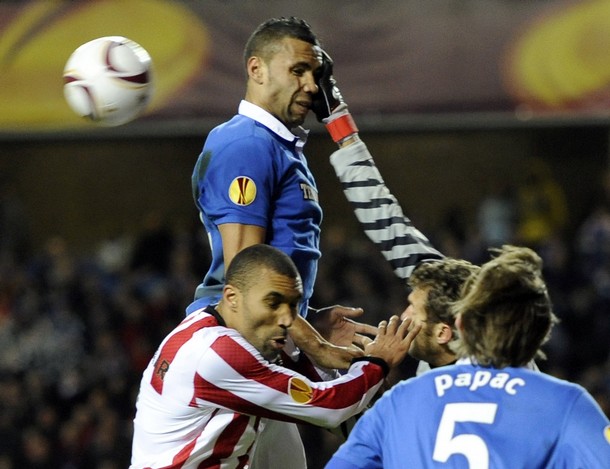 Kyle Bartley believes he is ready to become a regular member of Arsene Wenger’s defence after impressing during a successful six month spell on loan with Rangers.

The Gunners have been heavily linked with a number of potential centre-back targets since the tail end of last season, but with the season drawing ever nearer the 20-year-old maintains that he could be the man to help firm up the defence.

Recognising in himself traits which differ to those offered by Thomas Vermaelen, Johan Djourou, Laurent Koscielny and Sebastien Squillaci, the 6ft 3inch tall stopper told Arsenal.com about his ambitions for the months after a rapid spell of personal development.

“If I’m honest, I don’t think I was anywhere near the level to play for Arsenal last season. But I’ve come back, I feel really strong and I feel that I am ready now.

“I learned the demands of being at a top football club who are trying to win things and how important it is to be a champion and a winner. Every time you step on the pitch, you are going out there to win so there is a lot of pressure on you.

“I think I can offer something else [because] I am a little bit different to the other centre backs. I like the physical side of the game and I see myself as a leader. If Arsène decides that he wants me in the first team then that will be fantastic.”

Born in Manchester and beginning his career with Bolton Wanderers, Bartley led the Arsenal Youth team to FA Cup glory in 2009 before making his first team debut later in the same year against Champions League opponents Olympiakos. He later spent two separate spells on loan with Sheffield United before moving north of the border in January.

Recognising the importance of playing first team football, Bartley hinted recently that he would be happy to leave the club again on loan if necessary, but stressed that the circumstances behind his missing the tour of Asia were merely down to fitness issues.

“I spoke to the boss on the Friday before they left [for Asia] and he told me that they had four centre backs [going on the tour] and obviously I wasn’t fully over my injury yet. It’s just one of those things.

“It was always the aim to get back for the start of pre-season because it’s an important time of the year. I will be back with them on Tuesday when they are back in training with a view to going to Germany with them.

“He has said he doesn’t want me going on loan yet and he hasn’t made his mind up. My hopes are the same as every year, to be an Arsenal first-team player. Hopefully, this year, that will happen.”

I like the lad, hopefully wenger can ease him into the side and he can take over squillaci as 4th choice.

And by 4th choice you obviously mean 5th or 6th, after we get Cahill and Samba? 😉

You keep on dreaming mate. At least that will save your sanity.

Oh how I loathe thy summer!

What a Center Back? Get him in the squad now!

bring him in and let him start his Arsenal career…surely he can’t be any worse than squillaci!

Not difficult is it? I’m probably not worse than Squillaci and I’m female and 5’0 😛

Bring him in i say but please please buy someone who’s good enough to be a starting CB as well! Enough of us playing 3rd, 4th choice for the greater part of a season.

This lad has real quality. I watched him when he was at Sheffield Utd and from everyone I know that saw him play for Rangers they said the same. He’s a fighter and that’s what we need. I hate to use the word potential but he could be great. Old school arsenal great.

Looks like he could be good to have around, not of the preferable ‘peak’ age, but he’s had an impressive run at Rangers.
Seems like an combative, confident defender.

Good bloke you’re exactly right mate, he handled the old firm derbies last season like they were any old match and last year those matches were more of a battle royal than a game of football. After last season I’d take this guy over koscielny and schillaci.

Re: the comments above on ‘potential’; seems to be the idea generally with the squad in recent times. I’ve watched a few games from Bartley since he appeared in the reserves, and he looks fairly no nonsense – he’s a unit & doesn’t waste time on the ball. Amidst all the doom & gloom coming from most posters on here, it actually really pleases me to see a number of proper youth players coming through who have an attachment with Arsenal beyond being from a French-speaking nation that idolises Wenger (not that I have any problem with picking the best… Read more »

[…] Bartley says he can offer Arsene Wenger ‘something different’ in the centre of the defence. He feels he’s ready for first team football with us after a spell on loan at Rangers last […]

[…] Last month he said, “If I’m honest, I don’t think I was anywhere near the level to play for Arsenal last season. But I’ve come back, I feel really strong and I feel that I am ready now. […]