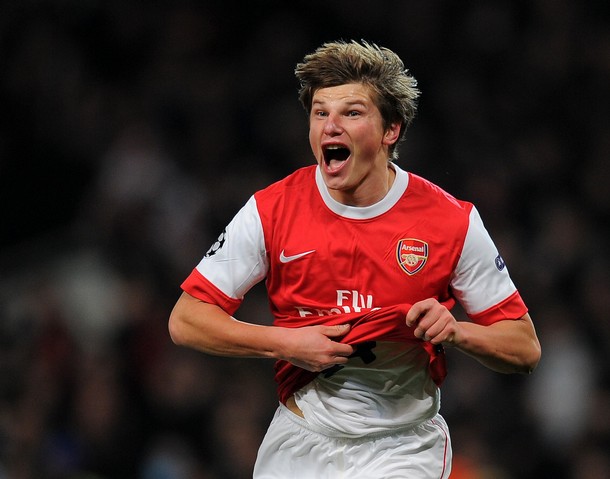 Russian publication Life Sports claims that Turkish side Galatasaray failed in a bid to sign Andrey Arshavin last season but still haven’t given up hope of signing the midfielder.

Claiming contact with the player’s agent, the report declares that coach Fatih Terim has identified the diminutive attacking midfielder as a possible summer addition as he looks to restore the Istanbul giants to their perch at the top of Turkish football.

It is thought Galatasaray will lodge a bid in the region of €14m while offering Arshavin a lucrative three year contract worth €9m.

Arshavin has already spoken about wanting to see out the last year of his contract with the Gunners despite speculation linking him with a return to Zenit St Petersburg.

Despite being a near ever-present in Arsene Wenger’s side last season, the 30-year-old struggled to consistently produce his best form and was on the receiving end of harsh criticism in certain quarters of the media. Despite his occasionally wayward performances the Russian still scored 10 goals in all competitions while providing numerous assists for teammates.

Can’t help but feel clubs around Europe are seeing us a dying power. I’d expect a van Persie bid soon from someone.

That’s exactly how I feel every day a new offer to one of our team and no news whatsoever about any signings…if all this team fly who’s playing next season then!!!

Last year of his contract? 14 mill? Only problem is that our side could end up looking quite thin if all these fellas leave. Also I still believe if we play 4 4 2 with Arshavin and RVP up front we could have a potent force. Wish AW would play like that as 2nd striker. It’s where he flourished before joining us.

the silence from the club is deafening. we are a bloody laughing stock and the board and the manager both need to take long hard looks at themselves.

I’ll second that. It’s pathetic. Lady Nina Bracewell-Smith was bang on with what she said yesterday. We need a fresh board and I’m starting to think manager as well. I’ll lose all faith completely if we lose Nasri and Cesc this summer. We might as well be a feeder club for city!!

How well have City done with Arsenal signings for far then?

Last year of his contract??? Alarm bells! In all honesty I can’t see him signing a new contract so this is a bloody good offer. Only problem is, it looks like we are losing about 5 first team players, as well as many squad ones, and everyone knows how long it takes a team to gel.

We’re getting fucked in the ass. Most shitty transfer window ever.

What? He only has a year left on his contract?!?

I think we “fans” need to take a long hard look at ourselves. Screaming for a clear out of players that don’t look interested, not up for it or not playing for the shirt and then panicing and flapping at every whisper and rumour of the next departure. This is silly season folks, the blogsphere is rife with speculation, rumour and conjecture. Let it be and save on the medication. Fan feeling was perfectly clear from the last few games of last season, all we can do is believe in the people at the reigns of our great club and… Read more »

CHEERS! Your comments really cheered me up this morning, thanks! You are absolutely right, lots of folk need to stop believing all the drivel that’s out there. Its a lousy time of year for Arsenal fans but we need to focus on something positive, difficult as it is. Use the time to check out old games or read up on football history or something.
Lets wait til the end of transfer season and then calmly assess what has actually happenened.
And as you say – at least we are not Sp*rs!!

Here here!! Our manager is very astute in the market, in fact there’s not many better, and as the lad above says at the moment it is “silly season” so despite us being linked with Tom dick & Harry I’d believe any potential signing we’ve made when I see it confirmed on the tv. the most worrying thing for me at the moment is the amount of players that want to leave the club. this has to be addressed first, & then the boss can see where he needs to strengthen, and act accordingly. & that’s what he will do.… Read more »

Bane
Reply to  Will

Wenger is crap when it comes to the transfer market. He had his glory days 6-10 years ago. Now it`s just failure after failure…. The scouts are the people sniffing out the young talents in the world and of those only Fabregas is a real success so far.

Will
Reply to  Bane

To mr “bane” how can u say wenger is crap in the transfer market? sure cesc has been a success but it was wenger who sanctioned the deal to bring him to the club after the scouts (probably Steve rowley) recommended him, it was same for van persie, adebayor, vermaelen, clichy, Reyes, pires, ljungberg, overmars, toure, walcott, song, eduardo, arshavin & Sagna, others he probably knew about from his time in Monaco (vieira petit grimandi Henry anelka) so while I take your point about the scouts, they are only part of the process, & while not all of our players… Read more »

I see your points, but Arsenal are handling this terribly. They never communicate anything to the fans ever, so without knowledge we obviously fear the worse.

If I wrote an article in the paper saying Barca are going to sign Bendtner for £80 million would you believe it? No, say why believe every other shite printed! Are you proper Gooners that attened EVERY game or just armchair critics? Man up people and have some F ing patience!

Despite all the bull shite, Wenger is only really second to the red nosed Scottish arsehole up north when it comes to management, he’s brilliant at his job and I think the right players will come and the right players ( as in the ones that want to stay) will be playing in red next season. We all want the best for Arsenal and all we can do is wait and see and keep supporting the team we love whatever happends. Remember NO player is bigger than the club especially it’s supporters. Happy weekend folks!

Another week down, any difference? | savagegooner

[…] but if it brings the old Rosicky back, I won’t be complaining. There has also been talk of a 14m euro bid for Andrei Arshavin from Galatasaray and a £10m bid for Abou Diaby turned down. Take that as you wish I […]

If I was a journo I would be wetting my nappy reading how some get so wound up about stories that are made up, because said journos have fuck all else to write about……….see Arseblog News today? They’ve only fallen for the story I ran that they’re about to sign Eboue’s one legged one eyed cousin…..

I feel like if the team as constituted was healthy, we could compete for a Champions League spot. When are we ever healthy? We are tired of being good but not great. I agree that this is the silly season but Wenger knew the mood of the fan base and yet he is still business as usual. He is either going to be seen as a stern captain who maintained course in rough waters or as a stubborn man who caused the ship to sink.

Every window is the same, little arsenals best players being picked up by europes elite. The worst thing is the silence, i know its best not to name players were after but we should guarantee to the fans x amount of players willbe in place for the new season. Why are we not biting back at barca and telling them to go away with their offer for the best epl midfielder. The market price is £50m plus, we will not discuss anything till then. The arsenal way is to be dignified, but we are bieng laughed at but everyone, our… Read more »

I dont think I can take much more of this press crap !!!!

£12million for a 30 year old with a year left on his contract? We’d be crazy not to take it as he is one of the highest paid players at the club and we will lose him for nothing soon.

I’m not sure the year left on his contract is actually correct. I seem to recall AW talking about this in January, he said We had an option on Arshavin for a further 12months if we so wish. So its really two years.
Worries me no one wants denilson, eboue and bendtner, we give these guys such large salaries that no one else can afford to take them of our hands.

I hope you’re right about the length of his contract. For me, that is the most worrying part of the article. I think Bendtner will eventually move – unless he has a change to heart. I don’t think AW wants to get of Eboue…