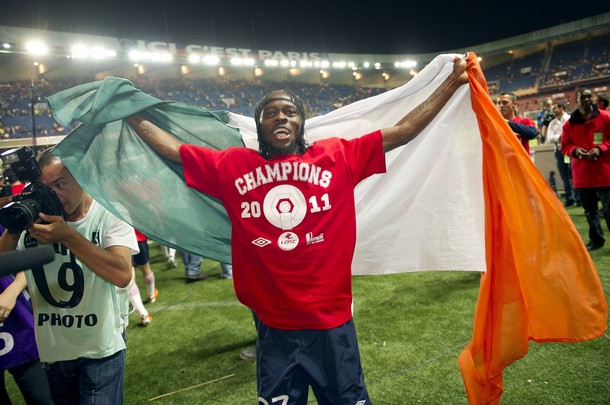 Gervinho has spoken for the first time about why he has chosen to move to Arsenal as the Arsene Wenger gets ready to unveil the Ivorian as his first big money signing of the summer.

The 24-year-old, who can play either up front or on the wings, has been linked with a move to the Emirates since helping Lille to an historic Ligue 1 and Coupe de France Double in May.

Speaking with enthusiasm about Arsenal’s style of play, Gervinho is quoted by the The Sun stating:

“I chose Arsenal because it’s a young group within which I will be able to integrate easily. I could develop more over there. There’s only a few details left to sort out.

“A risk? Not at all. I’m going to Arsenal to play. The best risk to take is to look to score goals and to play a lot.

“In football you have to take risks if you want to win. I’m going to Arsenal to win.”

Gervinho had been linked with a number of clubs across the continent with Paris Saint-Germain, Tottenham Hotspur and Liverpool all thought to have been keeping tabs on his progress.

Nevertheless, speaking to France Football he made very clear that playing for the Gunners was always his number one aim:

“I had no hesitation. None. But in a transfer there’s always a period of analysis and negotiations.

“All sides had to be satisfied so that things could develop smoothly.

“The Premier League is a notch above. It’s maybe the best league in the world. I want to live that sensation.”

He’ll be at city in 2 years

rite on…
We are like a portal now !
on a serious note, he seems to be a good signing though

Savage is a Dave
Reply to  @hurstyAFC

As long as that..

Why won’t he just cut his hair..

because then you’d see even more of his forehead

And he is a paddy as well by the look of him! We always win stuff with Irish players, now fuck off Clichy & masri for 25m plus Shay Given and I’ll be happy

With his hair and sagna’s . Djourou and his ginger Mohican
We are slowing accumulating the pl worst haircuts

What do you guys think of Fernando Llorente for Arsenal?

He’s probably the reason Eboue is going nowhere. Eboue will likely be assigned the task of helping him settle in.

i think that was racist…:D….fyi nasri and him are really good friends apparently…so if nasri stays he will be able to settle fast

Don’t see how it’s racist tbh. Im from an ethnic minority and see no problem with it. Ebo

They’re both from the Ivory Coast, looks like Eboue lucked out.

Still not racist. Maybe Eboue will find it offensive to his football talents though

I’m just glad this transfer story is coming to an end.

Come on guyz…he’s one of us now lets show him some luv…and hope he rips the Spuds Scam apart with his forehead! Welcome to Arsenal Gervinho!

Well said that man. Welcome to The Arsenal.

I agree CUoCO, the problem is there are a lot of plastics in the Arsenal ranks these days…glory hunters who became fans after the invincibles season and are tired of routing for a team that doesn’t have a billionaire financier. These fans won’t be happy unless Wenger makes multiple 30 million pound-plus signings and they’ll just slag off anyone who comes in that costs less than that. Frankly this type of fan makes me not want to watch football anymore…good thing I’m a gooner until I die!

Agree CUOCO. Let’s get a bit more positive or the rest of the summer and next season’s gonna be a right barrel of laughs.

While most fans seem to be quite content with our attacking options – I am quite glad we’ve seemingly wrapped this up and am looking forward to seeing him execute patented forehead smashes on John Terry and other c*nts. And I do hope with his reputation he adds some bite and directness a la Arshavin with (really racist-ly generalised but hard to dispute) some of that African speed/fitness. Sort of a Walcott on those Energizer batteries you see in advertisements but with actual final product and some resemblance of dribbling ability. Then we can avoid watching Bendtner play on the… Read more »

We officially have the ugliest right flank in premier league history!

gervinho is the nuts and he loves arsenal what more could you want?

Another week down, any difference? | savagegooner

[…] we finish the week knowing that we’ve still just got an Eboue. The rumours abound and with the noises coming out of the Gervinho camp it sounds like every single day is the day he’s going to sign, but we’re still […]

I understand the cynicism but you can’t fault Arsene. Arsene’s a philosopher/idealist – he cares about development, club and the game – and most players heads are now run by agents (the soft players). Arsene knows this so he tries (more often than not very successfully) to pick talent for the cheap(ish) hoping the talent is smart enough to understand that the large part of their success @Arsenal is from the truth of the system he has created.. The Board believes that he is better than anyone at this – and rightly so – he is and they love it.… Read more »

This, if it goes through, will be a “Meh” signing.

There is another Ivory Coast stricker who may be available if the right offer is tabled in the Fulham Road.

And a current Ivory Coast player we desparately need to see the back of.

….erm, has this deal actually completed yet or, is it like the Alex OxO-Pot deal which apparently began during the Crimean war.

Good luck to Gervinho (and his forehead) if he does sign for Us at all. He’s not everything we need/the most urgent priority but at least it shows some transfer intent from AW/IG.

Now for a LB, CB and a Vieira mark 2 please! Can u imagine what Vermaelen & Hangeland would be like together?!