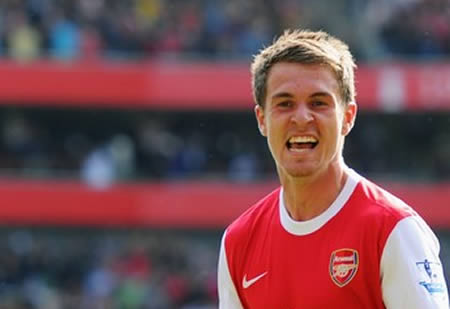 Aaron Ramsey says it’s time for him to make his mark at Arsenal and is determined to give Arsene Wenger a selection headache this season.

Speaking to Arsenal.com, Ramsey said, “I’m going to give it everything to start the season and hopefully stay in the team. I want to be a starter so, if given the opportunity, I will give my best to keep the shirt.

“At the end of last season I was just getting back into the swing of things, I put in a couple of good performances so hopefully now I can have a good pre-season and produce those types of performances week-in, week-out”.

Having missed almost 12 months after having his leg snapped in two by Stoke’s mouth-breathing, window-licking, scuttering gimp Ryan Shawcross, Ramsey made his first team return for the Gunners in a 2-0 FA Cup defeat to Man Utd at Old Trafford.

He showed a glimpse of his potential by scoring the winner in Arsenal’s 1-0 league triumph over the champions, and with a full pre-season under his belt will be looking to realise his potential this year.

Ewww… I don’t want him at Arsenal… he’s Welsh….

I’m not racist. I hate everyone irrespective of race religion or colour

The quality of trolls has really fallen.

I am Rothnir of Gondor son of Iramil the wise son of Naznil the manbearpig. But you can call me Steve.

What do you think “freedom of speech” means?

Ramsey could become our answer to Paul Scholes (minus the aw-shucks-I-was-late-again “tackles”).

My answer to Paul Scholes is always “cunt”

That’s not really news, is it.
Ramsey not being ready for the new season would be news.
Still, it’s something to read while waiting for the new signings.
Though Ramsey is like a new signing.

Almost forgot about Ramsey, he is a good reason that Arsenal fans can still be very positive.

Wenger hasn’t had enough credit for whipping him out from under Sir Alex Fergecunt’s ruddy, broken-blood-vessel ridden snout!

That’s because it is Gary Neville’s moustache that deserves the credit for it.

How can Ramsey be the answer to scholes hes not a ginger heard hair lipped car stealing dog fucking cock sucker ?

He should be like a new signing this season!!

Next thing you know, Arsene will say Ramsey didn’t play much last season, so he’ll be like a new signing! Just like Thomas Vermalean!

I like Ramsey, and feel with another season under his belt, will be help make our midfield even stronger. Ramsey, Wilshire, and Fabregas. Pretty solid.

Ramsey didn’t play much last season, so he’ll be like a new signing! Just like Thomas Vermalean!