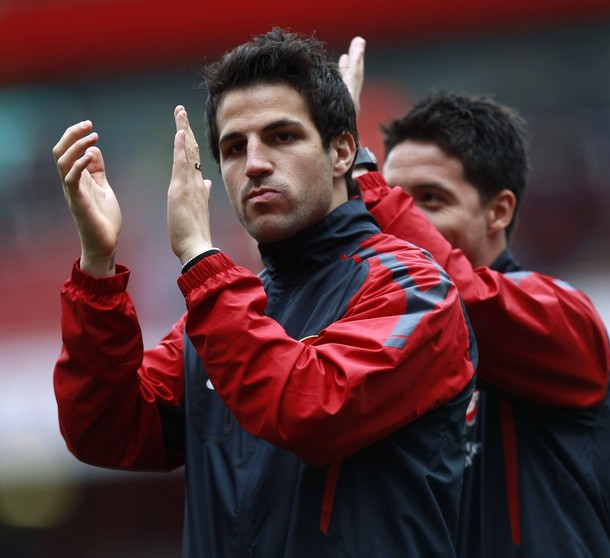 Arsene Wenger has confirmed that Cesc Fabregas will miss the Emirates Cup this weekend with the player unsettled by the speculation over his future and still struggling with injury.

The midfielder hasn’t featured in any of Arsenal’s pre-season matches so far with Wenger up to this point citing a persistent hamstring problem. That was until today when  the Frenchman hinted for the first time that his captain is not currently in the right mindset to step out for the club.

Speaking to the press this afternoon, Wenger confirmed: “He is just coming back from injury and we have to make sure that he is focused on being with us.

“Cesc is torn between two loves. I can understand that but we want to be certain about his commitment.”

Challenged as to whether he had set a deadline for Barcelona to table a suitable offer for Fabregas, Wenger continued:

“There is only one deadline, it is on August 31. The other deadline is for us to get everybody focused, the players who are really committed to the club, my energy and my focus goes on them. .

“That is what I focus on, I cannot help the other situation, because it does not only depend on me, it depends on the players and on the other clubs.”

While the above comments seem to hint at a likely exit for Fabregas, Wenger maintained a stubborn stance regarding the future of Samir Nasri claiming his compatriot will be staying at the Emirates despite interest from Manchester City.

“Samir loves the Club. We read that he and Cesc are somewhere else every day. But they are still here.

“My wish is that Nasri stays. I’m convinced he is going to stay at Arsenal.”

if mata comes we absolutely have to get rid of nasri, there is no reason for him to still be with us if he has refused to sign a new contract. horrible decison by wenger.

Why? A player just can’t respect his contract? If the guy had 5 years ongoing, and said something like “I want to go”. What would have been the answer? “You have a contract”. Actually, as long as the player is commited and good on the pitch, what’s the matter?

It seems to me like Nasri will be putting pen to paper as soon as cesc’s future is sorted. The cesc saga is key to all our dealings.

Cesc & Nasri + Gervinho & Mata means that our offense would be upgraded & ready for all comers. The defense on the orherhand . . .

Why is Wenger insisting that “Nasri loves the club”?
I want to hear the player say it.

to tell fans that Nasri loves the club is unbelievably condescending, we are not children who are going to run off and cry if he leaves!- just sell the bastard!

he will never say it as it is rubbish, the guy won’t sign a contract so safe to say no loving going on. which in reality is true for nearly all the players, none of them acare any more.

If a player who was never really a big game player leaves for 40m, I’d be reasonably happy. Gervinho who doesn’t hide in big games already adds value big time.
Now, when is our next cup final game? A bit more confident that we’ll be better off provided half of the squad ain’t on crutches.

Don’t understand why Wenger gets defensive with the Nasri questions, why doesn’t he take a similar stance with Cesc who has 4 years left on his contract?!

That’s because Wenger’s not a cunt but is a good human……..He wants to let Fab go because Fab is a fan of Barca and he wants to play there unlike Nasri who is tinkered by his cunty agent(for greed=more money) who also works on the Fab party of Barca transfer….

Dont understand why fans get offensive with Nasri and defensive with Fabregas. Nasri is willing to respect his contract. Fabregas is not. I do not say Nasri deserves more love than Fabregas but not as much hatred, as he hasnt done anything wrong. Blogs’ persistence that Nasri should be sold and his bias is seen everywhere nowadays and has a negative influence, unfortunately. I agree that Wenger should sell Nasri, in case he is sure he wont sign a contract and a good offer comes in. Considering that none of us know any of details, i think the hatred towards… Read more »

EXACTLY…..And Blogs also thinks that Fab played well last year,,,,,,i doubt his judgement even on this(he might have made good passes here and there but his hard work was left wanting in many games last year)

Well chris, there is in fact a clear difference. At least fabregas has had the decency to stay out of the spotlight and has not made a single comment this summer about his desire to leave. It’s clear to everyone that he wants to join barca, he will eventually and probably this season. However I personally believe he loves arsenal enough that if he did stay he’d give 100%. Nasri on the other hand, perhaps influenced by an idiotic agent, has clearly and equivocally expressed that he wants to leave. Then he tries to blame arsenal for the contrat situation.… Read more »

When did he say he wants to leave? I dont recall smth like that.

Wtf are you going on about? Cesc is a piece of shit catalan fucker who does not deserve to wear the captains armband. He did not give 100% this season we know this because his defensive duties were not good; he handballed at home to tottenham and gave away a penalty. He cost us the game at Barca. he is a shit! Nasri has only said one thing: “dont believe the papers” via his twitter. in Pre-season he looks serious. However Cesc is “unsettled” so he cannot play in emirates. Wtf ppl pay money to watch him and he cannot… Read more »

I think you’ll see Nasri shown the door once the Mata transfer is tied up. Wenger wants to make sure the midfield is covered. He’ll use the money from Bendtner/JET/Lansbury to bring in Mata. Barca will huff and puff, and look under the sofa cushions for some more dosh, but will come up wanting again, and Cesc will stay. With the money from Nasri, you’ll see Jagielka, and Samba/Cahill brought in to shore up the defense.

Now, I’m off to buy a lotto ticket!

Good for you for wishing Im with ya brother

The reason is simple. It’s highly likely Cesc will be leaving this summer and there is absolutely no way the board or AW could allow the sale of two of our best players in such a short period of time. Mata will replace Cesc and give Ramsey time to learn.

[…] for the Nasri situation, Wenger said: Samir loves the Club. My wish is that Nasri stays. I’m convinced he is going to stay at […]