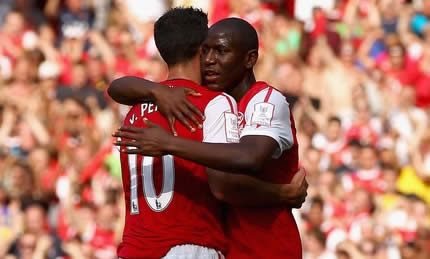 Young forward Benik Afobe has spoken of his happiness at making his Emirates Stadium debut for the first team. He replaced Jack Wilshere early in yesterday’s game against New York Red Bulls and afterwards he spoke of his joy at running out in front of 60,000 at home.

“It’s always nice to make your debut for the team you supported since you were 6 years old. So it’s a great day for me and my family and hopefully I’ll get more chances from the boss.

“I wasn’t really prepared for it, to be honest, but when I came on all the nerves went and I tried to play how I do for the reserves”.

Afobe was taken to Germany as part of the first team squad and says that he’s beginning to settle in. “I think the more I train with the team and the more time I spend with them I feel more comfortable. I feel relaxed with all the lads, they’re obviously a young group which makes it easier for me. And I speak French which is a bit of an advantage!”

He had a successful loan spell at Huddersfield last season, scoring 8 goals, but so far no decision has been made about what the coming campaign might hold.

“We’re waiting for the pre-season games to finish then we’ll talk about what’s going to happen with me”, he said. “My aim is always to play for Arsenal’s first team, I’m not thinking too far beyond that, but we’ll have to wait and see what the boss thinks is best for me”.

I think he looked quite sharp. Would not mind seeing him grace the bench this season as an option.

Likewise, thought he looked good. Hopefully a gem and not a dud for the first XI

Hope he gets his chance, especially if we offload Bendtner. Reminds me of Andy Cole in his playing style.

What’s wrong with him speaking French? Don’t they teach that in English schools anymore?!?

Nothing! I was just saying – a francophile from London = true Arsenal player

Oh good. The xenophobia is starting to extend to people intelligent enough to know a language other than English.

Afobe is already better than Vela. What’s wrong with Chamakh? He’s so shit now but Arsene will still keep him. I think being able to speak French is a big advantage under Wenger. I cannot believe we continue to complain about money. Wenger pays himself 6m per a year. We spend 15m a season for the new commercial team which hasn’t brought any additional revenue. He pays Almunia 50k, Eboue 60k, Bendtner 52k, Vela 50k, Denilson 50k and these are all average players who’re not fit to wear the jersey regularly and has been letting the team down for years.… Read more »

Listen to your tosh about commercial team earning 15 mil pounds…….Even the money groping corrupt basterds at ManUre don’t earn that much…….Really no offence but that was what we call “pulling shit out of air”
And Chamakh had his first season in EPL…….Let us judge him this year……

And anyways Chamakh is a passing kind of forward and not a target man.At bordeaux too he was like that..

@maturks..where do you get these figures?

From Wenger Bashing Monthly of course! It’s easier to make stuff up to back a stupid point.

Jesus, one vaguely positive article about a young man delighted to make his debut and already it’s a shitfest slagging off all and sundry.

I don’t ever remember it being so relentless, or that every single thing leads to load of bitching and complaining

Meh I don’t pay it any attention, despite my alphamale Arse-hormones raging at its bit to put down naysayers. The continued existence of Arseblog, and a well run news outlet for the club, and many other well reasoned opinions in sites like gunnerblog or 7amkickoff means I’m not alone in my support of the Arsenal cause.

And articles such as this are well appreciated, no matter the news being reported! So a big thank you!

“bitching” is a sexist term. i have a right to complain about that!

It’s like all arsenal fans a permanently on their period!!

Hey Blogs, when is the Arsecast gonna start up again?

Under the Crossbar
Reply to  arseblog

Bleh! Thanks for the update mos! Though as a harbinger of bad news I can’t say I’m glad I got to see that. Would’ve been happy to seen Mata come in for Nasribayor (with Cesc staying). Hope Arsene knows what he’s doing!

What is it with spanish clubs and transfers!? What a load of bull! Why does everyone try to worm as much money out of us as possible on every transfer? Is it like an inside industry joke to try and get Wenger to cough up as much as possible!?

Savage is a Dave
Reply to  TuesdayClubAssemble!

I wouldnt worry about that, because Wenger wont pay for squat.

Whilst Balague is a likeable chap, his revelations and news concerning La Liga comings and goings since 2006, has been shockingly inaccurate for someone supposably in the know. Im not saying he’s incorrect, just that I wouldnt pinpoint him as a trusted source. He still thinks Fabregas joined Barcelona 2 seasons ago.

I like this guy. And he supports Arsenal! BOOOOOOOOO!!!!! …errr, I mean YEEEEEEAAAAAYYYYY!!!!

The reason why most fans are negative is because they don’t see us winning as the club hasn’t address any of our shortcomings. Has anyone ever thought the reason why fabregas matured under us, aside for his natural talent, is because he came up with so many great players so no pressure was on him. I actually feel sorry for the current young talents we have. A little mistake from them gets blown out of the water even thought such mistakes is very natural for young players of their age. Gibbs get killed as not being good, how will he… Read more »

In amongst all the doom and gloom, its good that Afobe’s debut has been mentioned, I thought he looked, quick and strong as well as showing good movement. Hopefully he’ll get few more opportunities this coming season. Equally though I thought Frimpong looked sharp, and he should be able to offer some much needed competition to Song in the DM position, if only for a few games, though I’m not sure what happens come the ACN period.

Ok. First and foremost. Good lad Afobe. Another fan living the dream. He’s got a lot of potential and I hope he gets the chance to show it. I’d like to see him play alongside vP.

Now… It’s time I think we all took a moment and think whether we love the club or not. Let’s stop this bullshit bitching and for fucks sake back our team. If not go and support sp*rs or citeh because you’re boring the fuck out of me and most of the proper fans.

It’s a shame that some Arsenal fans have become so polarized that even a well done article about another prospect who did a fantastic shift creates such animosity. Everyone has an opinion on where the club went wrong. But do not get abusive on such a forum where Arseblog simply appraised Afobe’s performance. Save that energy for when Gervinho headbutts Evra to a coma while celebrating a hat-trick in a few weeks time…

He looked like a decent prospect, hopefully he’ll have put himself in contention.
He could leapfrog Chamack and Vela, if they don’t show some form.

Afobe put in a great shift yesterday for his debut. Put it into perspective what we did yesterday was a massive achievement. If any of you ‘supporters’ were thrown on after 5 minutes in front of 60,000 you probably would have bottled it. He didnt, he played his heart out. Great to see a life long fan getting a chance.

Hopefully he will get a chance at some point this year

I think afobe has ditched the technical sessions and has been pumping iron, he looked strong on his feet and has size to add to technical ability, frimpong looks small but I was impressed with his strength and determination to get the ball back after making a mistake. I noticed the work ethic of the two boys was really great, especially frimpong, maybe this is what we need to spark the arsenal pressing game and force the long balls that vermalen and kocielny can breeze away. Maybe that’s the way we can protect our defense and stop leaking goals, pressure… Read more »

Frimpong looks small???? He’s a tank! He is not as tall as Song if that is what you mean – but I think he is a different type of player. A lazy comparison, but he reminds me of Essien.

I wish the guy luck he loves arsenal played well and speaks French he will do well if he keeps his head and doesn’t do a JET on us by cutting his hair to resemble a retired Bangkok whores growler.

Something positive for a change “Hurrah” 🙂

It seems he is the complete opposite of JET in terms of hard work…..Reported by Daily Mirror Scout

Really have to love the fella he has heart and spirit plus gives us some good news.

Really Arsene has to wise up the fans will be so on his back if we loose points the same way we did last season. The fans are not going to put up with his usual rhetoric this could be a season from hell for him.

Christ when is the last time you heard fans boo a pre-season game ?

PS Nasri is still a cunt

OMG! Something’s not just the way I want it, ffs :( « Arseblog … an Arsenal blog

[…] yesterday, over on the news site, I posted a piece about Benik Afobe and how delighted he was, as a kid who had supported Arsenal since the age of 6, to make his debut. […]

There is nothing wrong when Afobe said he can speak French . Even though he was born in England but his country of origin is the Democratic Republic of Congo ex: Zaire . And I’m pretty sure French is the language spoken in his house . We should judge him as a footballer and not as French, spanish , Swahili, chinese ……..

Well done Benik. with your attitude I’m sure you’ll make the first team and regularly too.

[…] against the New York Red Bulls and didn’t look too shabby. He’s been speaking about his delight at making his debut at home during the Emirates Cup. Here’s a video of his performance during the match. He got […]