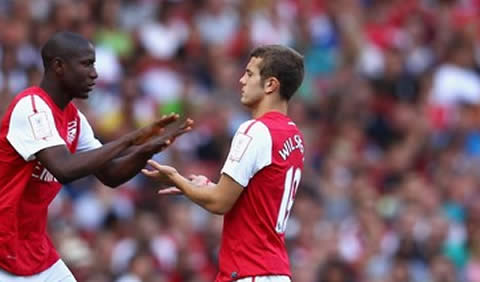 Jack Wilshere has urged the club to make new signings with the season less than two weeks away.

The England midfielder knows that silverware of some kind is crucial and believes additions to the squad will help. Quoted in The Mail he said, “We are not a spending club but we still managed to stay up there with the top teams, and we have to win things this year.

“Maybe if we had a few more faces we could really push on. If we get a few more players we can really challenge for the title.

“Around March and April we have to stay really strong. We are confident we can be up and around it then so we have to remain strong at that crucial time”.

Wilshere limped out of yesterday’s game with New York Red Bulls after just three minutes with what Arseblog News understands is an achilles problem. Arsene Wenger has reported an ‘ankle inflammation’ but says Jack’s absence should be short term.

“It is not very serious”, he said. “They say he might be out for the whole of next week because he has an ankle inflammation. But he has not torn anything. He is a quick healer usually and a tough boy so I hope he will be quicker than the medical predictions”.

I think everyone knows. It’s just about getting it done.

Savage is a Dave
Reply to  William

I hope this is not going to be a repeat of the Vermaelen saga of last season.

vermalaen? that ‘d be tragic!

shout it to the old man’s ears, Jack. Don’t think he heard you.