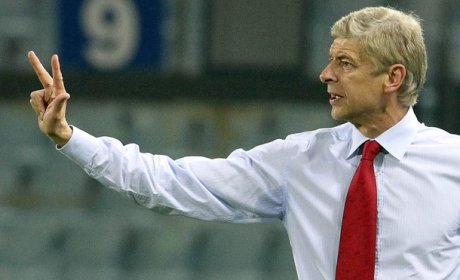 Champions League data can be notoriously difficult to find but never fear, 7amkickoff is here with some fresh numbers for you to digest.

92 – Percent of 71 passes completed by Aaron Ramsey**
78 – Percent of 41 passes completed by Benatia
0 – Percent chance I heard of Benatia before this match
0 – Percent chance any of us will remember his name after tonight’s celebrations
21 – Number of passes between Vermaelen and Sagna*
17 – Number of passes between Ramsey and Song and Sagna and Ramsey
12 – Number of passes between Frimpong and van Persie
1 – Fouls committed each by Frimpong and Jenkinson
4 – Fouls committed by Song
4 – Days since Arsenal have had a red card
331 – Days since an Arsenal keeper last saved a penalty in the Champions League (Partizan 1-3 Arsenal)
331 – Days since Arsenal last recorded an away win in the Champions League (Partizan 1-3 Arsenal)
14 – Consecutive years that Arsenal have made it to the knockout stages of the Champions League
10 – Consecutive Champions League qualifiers that Arsenal have won
21 – Positive goal differential for Arsenal in those 10 matches
19 – Arsenal shots
13 – Arsenal shots on goal
229 – Days since Arsenal last had 13 or more shots on goal (Arsenal 1-1 Leeds, FA Cup, January 2011)
35 – Degrees Centigrade at kickoff
20440 – Combined Meters covered by Walcott and Jenkinson on the right**
18582 – Combined Meters covered by Sagna and Gervinho on the left
7103 – Bottles of Lucozade consumed by the Arsenal players after the match

Let me know if I missed anything!

4 – Days since Arsenal have had a red card
Tip of the cap.

1 – Number of cunts Nasri is.. Sorted

13 – number of CL games after which The Arse will win the European Cup.

0 – The usefulness, in percentage, of the officials on the goal line.

60,000 – number of Gooners who will show that little jizzgargler Nasri how passionate we are next time he pops by the Grove.

hahaha. He’s brought it on himself with the way he’s handled it. He could have left on much better terms if he’d kept his fucking mouth shut

How about the number of fans who wanted Arsene strung up before this match against how many now think otherwise??

fickle cunts. hopefully this result will shut their pathetic mouths for another while yet.

100 – percent likelihood Szczesny has brass balls the size of cantaloupes.

I Sir will personally forgo my distaste for cantaloupes if that is the case.

I think we need a chant for this.

“Szczesny, Szczesny
Brass Ballls like a cantaloupe
He’ll stop a shot from any dope”

From Opta’s Facebook (need a place to reference back):

6 – Theo Walcott has now scored or assisted a goal in all six of his Champions League Qualifying appearances. Reliable.

This is the 14th season in a row Arsenal have qualified for the Champions League, only Man Utd & R Madrid are on a longer run. Streak.

why do Opta always have to put some stupid word at the end of every sentence asi if we can’t figure out what they mean by the stats? Annoying.

My Mum dated The Hoff
Reply to  rains

I see what you did there. Funny

The Frimpong to van Persie number is illuminating to me, the kid looks forward. Why did we all suffer Denilson so long?

Thats true. Frimpong looks like a force in both defence and attack, with his surging runs. Has massive potential.

Cos Frimpong was injured most of last season. Although still think he would have made more forward passes than Denilson.

Because Frimpongs knee was “Frimponged” for most of last year…….

117 – Number Of days since we Gooners had something to celebrate! (victory over manure on May 1).

6 – days left for Arsenal to bring some quality

Best fact is the 60,000 mentioned above. Can’t wait for that! What a CUNT. I can’t believe I put his name on my short last December. He’s worse than fucking Adebayor. Cunt cunt cunt!

er who puts names on their SHORTS? That’s taking the Nasri-love a bit too far!

Just a few years ago, Samir didn’t even know there was another team in Manchester. They were in the 1st Division! It’s so sad. Money rules, fuck tradition and loyalty! 🙁

nah, Adebayor doesn’t have a patch on Nasri for hateableness (That’s not a word is it. should be though). Nasri is much more intelligent and sneaky. Adebayor is just a stupid cunt. He already signed for Sp*rs in my eyes when he left us,so I’ll feel no different if he does. Plus he’s poison anyway, so hopefully he’ll ruin them like they deserve. Nasri is a conniving little cunt along with his greediness and therefore, in my opinion, is infinitely worse.

4 – seasons since we played with a goalkeeper.

4 – Days since Arsenal have had a red card

Would be interesting to see the stat on the number of times the Arse shot from outside the box.

Walcott, Ramsey and even Song had efforts. Definitely think they need some practice judging by most of the efforts, but was alot more positive nonetheless.

1- the number of near miss heart attacks I had whilst waiting for the browser to load.

Our season starts here folks, well, at least I hope it does. Tricky little trip to Manc land on Sunday. Pity Frimpong won’t be playing, but awesome that Denilson won’t!!

Raio
Reply to  She wore

to be fair, kroenke was never going to do it,
arsenal is worth more than 50% of his wealth.
Usmanov on the other hand has more money than abramovich,
but the previous share olders didn’t sell to him, so he can’t do anything.

1 – number of question marks that should go before exclamation marks

Big UPS to all at Arseblog for the live feed today. I am a teacher, and was stuck in a boring meeting, but was able to keep up thanks to the live blog. Another teacher and up to me during a break, and said her husband took 1/2 off to watch the match in a bar! Good result today.

While I agree that Ramsey wasn’t amazing, you can’t expect him to slice a defense in half like Cesc. Compare his performance tonight to last week vs Udinese and I think it was an improvement. Being able to slow the game down is a form of defence for us. Maybe he could realise when to play the ball faster and when to slow it down a tad better though.

He was much more composed on the ball and helped ensure we kept possession by always being available. I’d rather he be disciplined than spray passes all over the place.

I’d like to see Ramsey shoot from outside more. He’s got a decent shot on him, and he had chances to use it, but he seemed reluctant. Still, it was an improvement on the last couple of PL games in which he’s been a bit sloppy.

5% – percentage of Arsenal fans who REALLY think Arsene will spend any money this week?

90-Percent chance Benatia is our defensive signing after tempting fate with this post.

1 – Reason why that penalty was awarded yesterday..

So that we could see Szchzney make such an awesome save.. 😛

[…] We equalised on 55 minutes. A Rosicky shot was blocked, Gervinho picked it up, skinned the defender, got to the byline and pulled it back for Robin van Persie to slot home with his left foot. It was great play by the Ivorian who looked a lot more dangerous last night than in the previous game, and van Persie’s scoring record in 2011 is ridiculous (see the game by the numbers on Arseblog News). […]

I’d rather it were eden hazard

8 – the number of inches of skin on Gervinho’s forehead

So happy we won. enough with the negativity and on with the passion for Arsenal. Go Gunners

8 – the shirt number available for Hazard to take

This. Make that two cunts.

49% – Arsenal’s PL win percentage with Samir Nasri starting is well below the 62% win rate for the Gunners in his absence. Divorce. – OptaJoe

90% number of positive coments on this site

The other 10% can fuck of to some other negative shite site if which unfortunately there are. Entry.

100% – chance that we will play our group matches on the same nights as ManUre and be on ITV4.

10 – pints of blood spewing from my cock

[…] Both Robin van Persie and Carl Jenkinson have praised the spirit of the Arsenal team after last night’s 2-1 win over Udinese. […]

Go gunners, thanks arseblog for the numbers! Now to savor this win and look forward to MaNUre

Blogs any chance you sort out some kind of discount at wiggle if we link to through your site I’m buying a bike off them tomorrow and every little helps??

So tight you could be a spurs shareholder !!!!

[…] of you who are looking for my By The Numbers column should head over to Arseblog News (click the link!), that’s where I will be posting […]

Udinese 1-2 Arsenal, Nasri takes a cheap shot at Arsenal and Fabregas still feels like he belongs. | Being Arsenal FC Bystander

[…] Persie scored another goal, and according to 7amkickoff, he is 22 goals from 26 appearances in 2011. It would be greatly helpful if you could plunder 3 against Manchester this weekend Capt’n, […]

1 – number of times I shot outside the box last night. What a celebration.