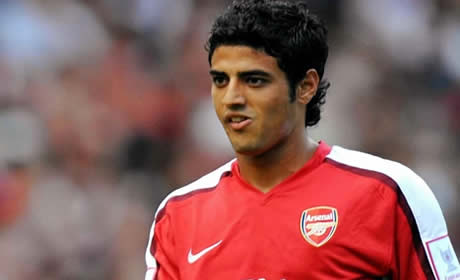 Yesterday’s arrival of Alex Oxlade-Chamberlain suggests that at least one, if not more, of the current crop of wide forwards could leave the club.

There are already rumours that Ryo Miyaichi will re-join Feynoord on loan because of his work permit issues, whilst Carlos Vela has been linked with two loan moves in the last number of days.

There is interest from Real Sociedad in Spain and now France Football report that FC Lorient are interested in taking the striker on loan for the season.

Arsenal have had a good working relationship with Lorient in recent times, purchasing Laurent Koscielny last summer, whilst sending youngsters Francis Coquelin and Gilles Sunu to the Stade du Moustoir.

Vela’s agent insisted earlier in the summer that the Mexican would staying at the club, but the arrival of Oxlade-Chamberlain, the rumoured further arrival of Joel Campbell, and Vela’s lack of overall impact suggest his future may well lie elsewhere this season.

I think a lot of people had. It makes one wonder whether some of these kids we send on loan to clubs on the continent will ever wind up back at Arsenal.

this guy’s been hanging around for too long now without playing for us, surely it’s time to either actually get rid or give him a proper chance of an extended run in the team. If we’re just going to keep on shipping him out on loan every season it seems fairly pointless keeping him, no?

Agree. Time to cut our losses.

I agree. Maybe AW seriously believes he can still make it. And, now that we have real wingers at the club + Bendtner is going it seems that now would be the time for Vela to stay and fight for a striker’s role at the club.

I for one have always been a fan. It’s clear he is very talented, but maybe the proper commitment has never been there?

Get the feeling we’ve got it wrong somehow in the strikers department, sending Bentner on loan and selling Vela would be my preference.

bender had some quality moments but caompare his consistency to RVP. big drop off. too much of a drop off. yeah he’s showed more quality than chamers but Chamakh has this season to lay down his mark after a summer to fully prepare.

Use Vela in makeweight for Mata!

Would prefer to see him get a chance with Arsenal, as he frankly hasn’t been given any. Has only got garbage time in meaningless or non-competitive games. I don’t think he’s any worse than Nik B who got LOADS of chances to prove himself. Vela should get the same chance. He’s is probably our third best finisher behind RvP and Nasri, he has good movement and has a good work rate.. With Chamakh struggling in a funk that he can’t get out of, it would be a massive gamble to give away our current 3rd choice striker for the season.

You don’t get chances – you take ’em. Jack wishere didn’t got the chance he “simply” proved at training, at loan and in matches that he was the better option. Vela has yet to do any of that..

He’s played pretty well in the pre-season games though. Perhaps AW should give him a shot during the beginning of the season and see how he does.

Vela shines when we’re winning 3-0, he’ll score his text book chipped goals, when he’s come on for The Arsenal in the premier league he’s been non-existent. I’m inclined to agree, let’s give him a good run at it, or move him on. I see the merits in loaning players out, but if we want to play Vela in the future, loaning him abroad is not getting him the very necessary premier league experience.

On second thought, could this possibly be a denilson type loan? (i.e. can’t sell him so we loan him)

My thoughts exactly. Perhaps he was unlucky in the managerial situation at West Brom last season, but I can’t see a future for him in the PL.

I really do think people look through Rose tinted spectacles when it comes to Vela. When he first came to us I was a big fan and I genuinely hope he does come good because when he is on form he’s a very exciting player. But third best finisher? Really? The guy couldn’t get into the West Brom side last year.

Never been convinced by him. Seems to know exactly where the goal is, but seems as though he can’t be arsed half the time.

Vela started brightly but has quickly become surplus. he’s a striker by trade and being played as a winger. He shines in games we are already winning easy coming on and adding a nice lobbed goal but in games we are struggling and need a goal vela is like a rabbit in headlights. Maybe a season on loan will get him his mojo back

You know what headline I’d like to see? “Sneijder joins Cahill and Mata in Arsenal transfer frenzy!”. The Dutchman is never connected to us as we can’t afford his fee or his wages but he’d be an awesome Cesc replacement.

hes too lightweight for this division and when he loses the ball doesn’t try and get it back , he stands their trying to get a free kick if he did play up top do you seriously think he could handle the likes of terry or nemanja kidic etc etc coming in with challenges or just pushing him a little bit he will fall over all the time a lot like eboue , he has got talent though will it work in the premier league? doubt it very much,he should have gone on loan to bolton last season and bulked… Read more »

i think a loan to another prem team would be good, think hodgeson taking over west brom screwed him because clearly di matteo rated him but hodgeson didnt. even though he got 2 goals in 2 games of like 15mins of game time to equalise, so showed he can score when pressure is on. after that unused sub for next 3 games when roy came in. needs a chance before we off load him

They should loan him to Bolton, makeweight for Cahill

He’s the sort of player you need to get the 4th goal and run time down when you’re 3-0 up and in charge of the game.

He’s not the sort of player you need when you’re behind or have a small lead that you’re having a real battle to keep hold of.

Loan or sold, either way the squad is better off without him.

I thought he was having a decent pre season. But seriously, Vela is going to be our new left back. We can’t get rid of him!

[…] Arsenal and Lorient have a good relationship involving player exchanges. A move for Manga could be smoothed over if the Gunners loan forward Carlos Vela to Lorient for the season. […]

almost every single goal he scores is comedy chip / lob, and he is therefore one of my favourite players because he makes me laugh. if he could learn a few more tricks he could be useful for us. apparently he’s very quick too?! his assist for aaron the other day was excellent. anyway, he’s clearly been really underwhelming at arsenal so far, but i say give him a run this season and let’s see what he’s really got. out of all the positions i think strikers need the most time to settle in to effective form / communication with… Read more »