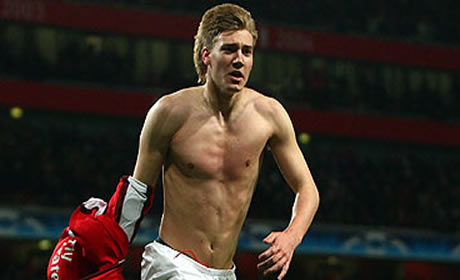 Nicklas Bendtner has confirmed he’ll be leaving Arsenal but refused to be drawn on a possible destination. The Bendtner saga has been over-shadowed by the continuous speculation over the futures of Nasri and Fabregas this summer, but it looks as a move is very close.

Speaking ahead of Denmark’s friendly against Scotland, Nick was asked if the transfer had been arranged. “Yes. I have done my part as well as I can and it’s up to Arsenal now to sort it out, I can’t do anything more. Hopefully it will be sorted soon but as I said to the Danish press, when I know something they will.

“I would like to play at a place where you are happy and play every week, that is the most important thing for any football player and hopefully that will happen soon.”

Stoke City has been mooted as a possible desination but Bendtner said, “I can’t say anything about who I have been speaking to, but hopefully it will all get sorted out soon.”

Arseblog News would like to rule out Stoke as his new club for a number of reasons:

With the new season just around the corner we could see some movement on this before the week is out.

A lot better than Chamakh.

NB was never going to make it.. I admired his willingness to try, the fact he was a good header if the ball, and his poaching abilities but he doesn’t have the required skill or class to be a starting striker for us. His first touch is at best abysmal and I’m glad we have cashed in. People slag off Wenger for keeping chamakh but he cost us nothing and deserves a chance to prove albeit as a sub that he’s not a two month wonder! Anyone who saw villa away last year will realise chamakh is capable but understand… Read more »

Bendtner’s had higher highs than Chamakh aswell you realise?

I am not a fan of Bendtner’s attitude but to look at the past few years of both of their careers for both club and country, take into consideration the fact Bendtner is still very young and there’s no real doubt in my mind who the better player is AND zero doubt who will go on to be the much better player in the future.

But yeah, people love the one you’re with. So let us pretend Chamakh is the better player.

Not much of a bench mark!

Savage is a Dave
Reply to  Lord Teddy Ears

Defo better than Chamakh at the min, WTF has happened to him??? Oh and I agree…..Nasri is a Cunt!! Fucking lesbian lookalike!!!

El Gran Pubis is intellectually incapable of integrating any individual with a modicum of ability into his formation/military phalanx. Just ask Tuncay and Gudjohnsen.

(Yes, I am suggesting that Big Mick has a modicum of ability. Just a modicum, mind.)

Definitely better than Chamack and far pinkier bootsier too. Farewell Nickster, you made a fair contribution to our club and you’ll be missed (a tad)

We sell our good players and buy ones we don’t need while neglecting the areas of the squad that actually needs strengthening, while Wenger seems to have some sort of allergy to the defense, and therefore leaves it to rot. Good club,.

Shame that his actual talent was outshone by his perception of how much he had.

As a regular starter he’ll get whoever he ends up with 15-20 goals a year. As long as it’s anywhere but with those clogthumping, thundercunting, longthrowing, legbreaking filthmongers.

Apologies for the oversight.

shame he is leaving, certainly added something to the squad and as written above and agreed by most is world superstar in comparison to chamakh who is fighting with squallaci as our worst ever signings!!!

jesus TomC you hit it hard! 🙂

That Cheddar gorge cider is mean, that said Chamakh looked fuckin unstoppable after 6 pints of that stuff.

Good luck NB, never took his chances, never became the greatest striker that ever lived. Yet….

Good riddance. He thought he was far better than he actually was. He won’t be missed. Like to see chamakh gone aswell as he really is shit

And why didn’t the rioters smash up White fart lane!

shit doesnt burn that s why

I think we’re being massively harsh on Chamakh. He’s badly out of form but has quality. He got 7 goals in the opening 15 games of last season. 11 goals and 8 assists in all competitions with most coming before RVP returned in flying form. If he gets game time and some confidence he’ll be good again.

I agree. And unlike Bendtner, Chamakh works hard, knows his own limitations (Bendtner isn’t aware he has any) and is capable of scoring a headed goal.

Watch this guy doesn’t come back and punish us.

Haters gonna hate… but Chamakh is an excellent 2nd team forward…like Bendtner. We always piss & moan that our team doesn’t have decent depth, but we need to keep players like these for when our first choice 11 get hurt.

Both play their role well and are the best headers of the ball on our team!
NB will be missed.

Disagree mate, what did they do when they came on?! Bendtner had his golden opportunity against Barca and blew it. Good riddance

I kind of liked the bloke. Gudluck B52. And what’s with the secrecy about where he’s heading? Would have thought arsenal would have to agree a fee before personal terms are discussed, not vice versa? Guess it just being that difficult shipping our squad players!!

I’m happy Bendtner is gonna leave. Hopefully he won’t come back to haunt us but idk why everyone is on Chamakh. The guy played well for us last year…….yes he is in a funk and hopefully he comes out of it. If not Gervinho will lead the line. But I am frustrated because we need another cb or lb depending on Vermaelan

According to the Daily mirror (I know, questionable source) when a reporter asked about Stoke’s interest in him, Bendtner laughed out loud, and then gave that boring quote.

Say what you will about his ability, but Bendtner was a character and I’m gonna miss him. I think he’s going to score a lot of goals if he ends up on the right team and in the right league. And if he keeps his pants on, of course.

For me bendtner has caused the rot for shavs and chamakh, watch them blossom woth not around. Good riddance to that lanky twat.

Shame we couldn’t get Citeh or Barca to overpay for him, ala Toure, Adebayor, or Hleb, so he could sit on their bench or go out on loan for them.
That said, I’d like to see the back of Bendtner. He’s disruptive in the dressing room, and only seems to care about number one (or 52, in his case). We need lass players looking to make their individual marks, and players more inclined to support the name on the front of the shirt.

Chamakh needs to find some form and if he does he’d be good back up to Van P. However when Van P gets injured – given the desperate situation Arsenal are in – to allay the army of fans waiting with bated breath to start booing when results don’t go our way – can we afford to hope that he starts to play well again? With all the vitriol thrown Wenger’s and the team’s way, Relying on a player so shorn of confidence like Chamakh is, like a lot of our injury-prone squad members, a bit of a gamble; in… Read more »

as in we need a signing who’s not only proven and confident, but who’s also get a bit about them. A bit of bottle, some god damn character and mental strength.

Chamakh currently reminds me of Bambi in the ice scene. all flailing legs and no control
Say what u want about little Nicky but he always had a goal in him and scored some very important late goals. chamakatak hasn’t

Fucking skybet still have short odds on bendtner going to sporting. Didn’t they come out more than once saying it was ‘pure fiction’ from their chairman. God they are as bad a metro for regurgitating old already quashed rumours and running with them

Be sad to see him go but then again with chamberlain coming in and Walcott wanting a central move plus gervinho a d chamakh and vela maybe there wasn’t room for him anymore. I want to see us play 4-4-1-1
sczc
Sagna verm kos Gibbs

No room for bendtner in that line up

He is better than chamakh, but you get what you pay for in football these days. Lol

Bendtner isn’t allowed to say where he’s going coz he’s part of a swap deal involving Messi and Iniesta…surely.

A new signing – more to follow? « Up The Arsenal

[…] in and out over the coming days, Nicklas Bendtner has intimated that the only thing holding up his move away from the club is an agreement between Arsenal and his perspective new employers. Carlos Vela looks set for a loan […]

[…] on the way out, Nick Bendtner, the greatest striker that ever lived, but he’s not saying where he’s going. Hopefully not Stoke. That would bother me a great deal, what with Lennie, the scuttery little […]

i heard Nick Bender sent rossell at barca an email drawing his attention to his availability and his ‘bargain’ 100k/week wage demands.

he told his dad to do it after saying ‘they mustn’t know i’m available dad! why else wouldn’t they have made contact with arsenal? Get that production company to fire some youtube compilations together of all my best bits and we’ll put together a brouchure, like adebayor did that time. Once they make contact let them know i’m willing to drop my wage demands to 100k/week to help the move along’

I remember him starting a CL game last year, Porto away I think. The amount of times he kept coming deep to get the ball, or was simply not in the box when we had the ball in wide positions was extremely fraustrating. Is he better than Chamakh? Debatable for me, I though Chamakh’s first touch and link up play at the start of last season was excellent, goal scoring ability is questionable at times though. Hopefully Chamakh gets his touch back. For all of NB’s faults though, the lad always tried and never really hid in games, and being… Read more »

Gazidis at the AISA meeting, more on Oxlade-Chamberlain, a move for Cahill? « savagegooner

[…] other transfers then, Nicklas Bendtner looks set to leave, but he won’t say where. The bit I liked was him laughing when asked whether it could be […]

i would love it if he went off for a few weeks and came back with a moustahce and tried to get re-signed as Richard Baukner.