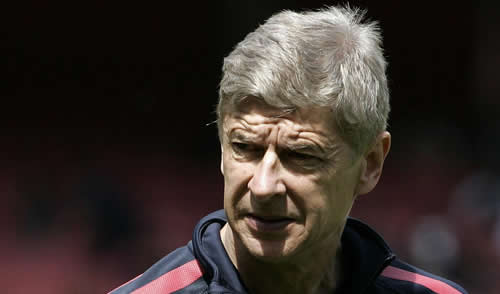 Reports in Spain suggest that Arsene Wenger is ready to move for one of Real Madrid’s brightest youngsters, Jose Rodriguez.

AS reports that on the recommendation of Spanish scout Francis Cagigao, Arsenal brought the young striker to London in June to see the training facilities and the Emirates Stadium. He met with Cesc, who apparently advised him to sign for the club, and left with an offer of €300,000 per year as well as a place in the U-18 team. Wenger has also spoken directly with his parents.

On his return to Madrid he advised them of Arsenal’s offer and the Spanish giants have presented him with a professional contract with a €6m release clause. Wenger is looking to take advantage of the loophole in Spanish employment law which saw him land Fabregas in 2004 and also sign Barcelona youngers John Toral and Hector Bellerin this summer.

It remains to be seen if Arsenal have done enough to woo Rodriguez, who was a stand-out player in the U17 World Cup, or if Real’s offer will be sufficient to keep him in Spain.

Hopefully, Arsenal checked his DNA first. We want to avoid the “Jose to Madrid” transfer saga cranking up in 3 or 4 years time.

It is always nice to see the youth team being built, with a view to supplying the first team. Usurping under the noses of Real Madrid makes it even more appealing, however we are all crying out for the Fabregas/Nasri contracts to be sorted out and to see at least one new CB signing – for the first team.

Nice of Cesc to put in a good word.

Of course he would want that. Taking talent away from Real gives yet more advantage to Barca.

If you were Cesc, you would do that……Two three years ago Cesc also mentioned that his family would be happy if he played for Real Madrid….In this case, he advised the youngster, because of what he has achieved so far

If this was in June I can only imagine the young lad has accepted RM’s offer. Sensibly they have probably done what we should be doing with Nasri – offer an inflated contract with a view to selling him shortly thereafter.

Or… you get stuck with an overpriced player on your books who isn’t good enough for the team but who you can’t ship off because no one else will match his wage demands. See Craig Bellamy; See also, Bendtner, Eboue, et al. Not every thing of value appreciates.

LOL…..When Bellamy left, he was their best player………It’s f#cking Mancini that’s ruining good football,,,,,Mancini wasn’t always like that……..And i would have played Eboue on the wings or DM because his dribbling and lane change is awesome and he knows how to defend for DM….

Well, then scratch “who isn’t good enough for the team” from the above. It’s debatable in each case, but in any case whether the player is actually good enough is irrelevant to my point about the market.

I’m happy to see business like this going on. It pleases me that Arsene is out hunting the best and brightest from Jose and others. It only strengthens us in the long term.

Let’s hope this kid is half as good as Cesc.

Another young striker, just what we need….

i do love it when wenger takes advantage of that loophole in spain coz it really does piss off them. lets see if we can do it more to them barca cunts.

Have I read this wrong?? I am assuming that this is incorrect and we wont be paying him 300,000 Euros per year??!!

Hargreaves? Comp for song? If he isn’t injured he’s pretty good… Everyones gonna laugh at this aren’t they? Go on… laugh…

Nah he is a good player but i think the biggest question is when is he not injured although the Arsenal medical team would really earn there money trying to mend him.

[…] that, nobody has a clue what’s happening, except Arsene Wenger of course. Wait. Get this. We’re looking at signing someone! A young forward. I think it was a forward anyway. Good news though, they’re Spanish and not […]

Why can’t we do our incoming transfer business quickly. I’m talking about the bug signings. Ferguson does it and they haven’t stopped winning for years now. Surely gettin the business done early allows you to plan for the season ahead and have the new players fully integrated into the first team before the season starts!!!

And yet, Manure have been the slow starters while we peter out.

I’ll wait and see what happens before I say owt about it.

All I can say is that my penis is stiffening slightly, as the new season approaches.

FFS..another under-18 and not even a defender. We are fucked.

exactly. Wenger is losing me and I can’t believe I am saying that.

Buy youth when you can’t buy quality experience. Is this a broken record or what? I have backed Wenger always but this is just getting ridiculous. Would you quit fucking around and just buy a quality centerback. Bring your chequebook and be ready to spend. Get rid of Squillaci and Almunia as quickly as possible.