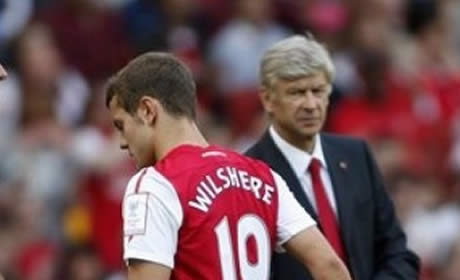 Jack Wilshere has withdrawn from the England squad for their midweek friendly with Holland at Wembley.

The move puts into serious doubt his availability for Arsenal’s opening fixture of the new campaign against Newcastle. Reports in the press had suggested Fabio Capello was set to ‘defy’ Arsene Wenger by playing Wilshere, but having assessed his injury he has been released from the squad and back to Arsenal for treatment.

On Saturday Arsene Wenger hinted the midfielder’s injury was more serious than first thought, saying of his England call-up, “They can include him as much as they want, he will not play”.

And when giving an overall update on the injuries within the Arsenal squad, he said, “Wilshere is injured on his ankle and it is very difficult to set a concrete deadline on his comeback”.

Gunners fans will be hopeful he can recover but a Wilshere-less start to the season seems likely.

Hope he recovers soon. We miss players with heart

Is theo out as well

and so, with teeth-grindingly painful inevitability, it begins….

Personally I think he’ll be back on time and was under firm instructions to tell the England physio’s he’s still in pain so as to allow full recovery and not risk a relapse over a nothing waste of time friendly.

Let’s hope it’s not this same injury like vermalen where it’s only a minor injury and end up being out for a whole season…..and looks like our policy of signing young talent and hoping they’ll automatically become winners instead of buying the experienced winners that we really need to start winning again is the same with the arrival of chamberlain :s

When he comes back, he will be “like a new signing.”

Is he a centre back..this Prozac fella?

Lol I know there’s some idiots on this place at the min but I’m not one of them.

I sincerely hope this spate of injuries gets terminated at some point. Am I the only one that thinks Arsenal gets so many injuries compared to the other teams? In any case, I wish the ever hard-working Jack a speedy recovery. Love you, Jack!

[…] playing and not all of them have the drive of a Lansbury or a Wilshere. Speaking about him, Jack Wilshere is out of the England squad so we’ll have to wait and see whether he makes this weekend at St. James’ Park. Thomas […]