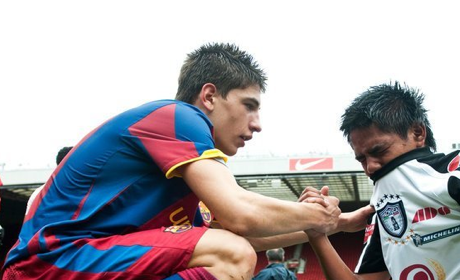 Every summer, Arsenal award scholarship contracts to several promising players. When the process occurred this year, however, there seemed to be a greater sense of anticipation than usual, with much of the publicity offset by Barcelona’s evident disappointment at losing two promising youngsters, Hector Bellerin and Jon Toral, to the Gunners in a situation similar to the one that brought Cesc Fabregas to North London.

Bellerin and Toral are joined in the setup by two further foreign youngsters in German Serge Gnabry and Kristoffer Olsson, from Sweden, and all four have settled in well during the early stages of their careers at the club despite a paperwork hold up with FIFA meaning that they were unable to play for the under-18s until last weekend.

Gnabry has already made something of an impact at that level, scoring with a sumptuous effort in the 2-2 draw with Crystal Palace last week, building on his impressive showings during pre-season which yielded a goal for the Reserves at Boreham Wood. An attack-minded midfielder capable of operating on either flank, or through the middle, Gnabry is, despite being one of the youngest in his age group, expected to make the step up to the second-string on a regular basis before the end of the campaign.

What of the boys from Barcelona? Toral has shone in training but is currently out injured, whilst Bellerin, who usually plays either at right-back or on the right-wing, has turned out twice for the under-18s already, setting up a goal on his debut. It is thought that the key reason for the acquisition of the duo was that they would, once they have fully adapted to life in England, be somewhat fastracked into the Carling Cup side, possibly as early as next season, although as with any young players, it is important not to get too carried away at this very early stage.

Olsson, meanwhile, possesses terrific technical ability but still needs to improve physically to be able to adapt fully to the English game. The acquisition of four foreign youngsters, then, has meant that the club has promoted a reduced, certainly in comparison to previous years, number of internally-produced products, with just three members of last year’s under-16s making the step up to London Colney.

Anthony Jeffrey, one of those who was selected, is a lightning left-winger who, at one stage this year was the third fastest boy his age in the country. He is joined by centre-back Zach Fagan, who models his game on Rio Ferdinand, and the versatile Isaac Hayden who can operate in a number of defensive-minded positions, including the holding midfield roles.

With any batch of youngsters, as mentioned previously, caution has to be taken as history shows that only a select few from any group will enjoy a sustained spell in the first-team. With this collection of players, however, the early signs indicate that, particularly with regards to the foreign youngsters, the decisions regarding who will be afforded a first-team chance will become somewhat more difficult, as the cases of those involved become increasingly stronger.

They will all be aware, though, as they will doubtless have been told by the coaching staff already, that this is only the beginning and, if any of them are to eventually reach the top, their attitude and application, as well as ability, will have to be at its optimum throughout the process.

Promising for the Future, I’d still like to see some money spent in Jan. With Wilshy out for the season (most likely) we need some player(s) to step into the gap(s). I’ll leave the guessing who it should be to you chaps.

Great article again Jeorge. I really enjoy reading these as well as your blog.

Is he breaking that guys hand in the picture?
“Come on, take it like a man, don’t be a pussy!”

Great read, this blog and the Young guns app are very interesting.

Nice insights Jeorge, thanks. I always look forward to seeing which of the names bandied around in the youth sphere, progress on through to carve out a niche for themselves in the first team set up, we all know the particular marvels of recent years, heres to the next couple (or three).

These guys will probably be very good youngsters. Will be keep them longterm? We’ll see.