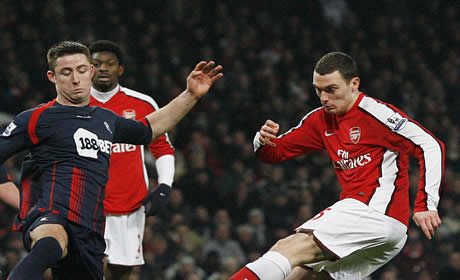 It is being reported that Thomas Vermaelen has undergone surgery on his left ankle and faces a significant spell on the sidelines.

The Belgian picked up a knock in Arsenal’s 2-1 win away at Udinese and while Arsene Wenger said he ‘should be all right’ for the game at Old Trafford, it has emerged the problem is more serious.

Vermaelen made just 5 appearances last season as an Achilles problem ruled him out from August until May, and there will be fears that an issue with the same ankle could make things more problematic. He is expected to be out of action for at least 2 months.

It’s more bad news for Arsene Wenger after seeing Jack Wilshere ruled out for 2-3 months, also with an ankle injury.

It should be noted that the reports are, as yet, unconfirmed, but as this is Arsenal, as sure as night follows day and Na$ri is a cunt, it’s probably spot on.

I Bleed Red
Reply to  freakstreet

**IMPORTANT**
Before you scroll down to read further allow me to save you some by summarising all comments below-
FUCK THIS FUCKING CURSED SHIT!!! SHOULD’VE BOUGHT BLOODY CAHILL!!!
NASRI’S A CUNT!

Afraid we’re just screwed with lady bad luck this season. This is terrible news, im not gonna gloss over this with empty bravado. We cant afford to lose TV long-term.

So we’ll be having Mertescielny for the time being. Or Djoursacker. Should probably be alright, until we face tougher opposition.

Or, perish the thought, Squilersacker. . . .

Next to go RvP, and we’re all set for a total disaster. There’s no end to this downward spiral of eating shit.

Ah, you know what? FUCK THIS SHIT.

So that’s two of our three most important players, out for two-three(and you know, propably way more) months. So upsetting.

This is just bullshit. Does the club really know what they are doing medically. Now 5 days after the window shuts we are stretched at the back again. Ps na$ri is still a cunt

Honestly, our boys need more calcium in their diets or something!? Can’t they get a strength and fitness coach from a rugby team or something?

For the love of god, some fucker out there must have voodoo dolls of all our best players and is sticking the needle in constantly.
Will we ever have a fit 1st eleven?
Don’t remember Adams, Parlour, Bould etc being injured this much, come on AW, get the team on a steak chips and beer diet.

bloody hell, just as things were looking brighter this one comes up. SHOULD HAVE BOUGHT CAHILL 🙂

We’ve lost Cesc, Nasri, Jack, TV5, we have no more real quality left to play, RvP will be injured for sure this week, or next.

Will be a miracle if we can stay within touching distance before we can buy our way back to a hope of CL,.

we still have Arteta,Gervinho, Frrimpong and Mertesacker to cover for them . Don’t be so NEGATIVE

For fuck sake, its about time somebody checks these guys medical certificates out to make sure there not forged from some S.American country!!

Fantastic irony on the pic. Should have got Cahill too, damn we’re in serious trouble

Fuckin hell, FUCKING HELL! (Bangs head against wall) can we not be cursed?

This is depressing. I’m gonna have to shag the wife to cheer myself up.

Better give here one for us all please mate!

And Nasri is a cunt.

WHY WHY did wenger not buy Cahill for 12 – 13 million only he knows ?
He seems to have taken us backwards, over the last 7 years lewin went now we have injuries galore, dein went then we went from superstars to supersuds
AW if you fail this season then you can go upstairs and we can get somebody that cares about the fans !

The Law
Reply to  danny miller

Perhaps he didn’t sign Cahill for 12-13 million because Bolton turned down a bid of around 15m for Cahill from the cunts down at Shite Hart Lane. At least get your facts right before chucking your toys out of the pram.

And Na$ri is a cunt.

Probably because he bought Mertesacker for less.

Bring on the “New Signings” in November however…

And Na$ri is a cunt.

Thank fuck we have Mertesacker, having two defenders with leadership qualities doubles the chances of our defence not being shite in any given game, as it is I’m comfortable with Mertescielny.

Well you have to assume Wenger didn’t know he needed surgery, if he did, that’s the same mistake two seasons in a row, and not acceptable.

if not, someone should be fired for not getting the proper diagnoses before the window shut.

will there ever be a rainbow? questions need to be asked of the medical staff because this has been going on for some time. absolute joke.

you’ve got to be fucking kidding me…

Arsenal lad through and through that Vermaelen is!

Fuck this shit! Are these guys on fish food diet? Our valuable player! Why didn’t it happen to judas cunt Nasri?

I think I’m going to have a small cry. We seem to have an Achilles heel… Oh yeah, it’s our Achilles heels. I read somewhere that $amir Na$ri wasn’t a cunt but then I was informed it was the same guy who said Wilshire and The Verminater had small knocks.

Nasri is A CUNT….. Its a noun people. In fact, its an ultra noun, which means its all in caps.

Oops! Sorry, scratch the “Used to describe”….that would make it an adjective. Just start with “Money Grabbing”. My bad.

Read the headline, checked the date to see if this was April 1st. This is unreal. Season is already going down the toilet with all the injuries. Our players seem to be made of glass. Seriously, Arsenal needs to take a good look at their strength and conditioning coaches and fitness regime to determine what’s behind this.

Well, it could have been worse to be honest. PS: Na$ri is a cunt.

There’s something seriously wrong with Arsenal’s training methods in my book. It’s not so much how injuries are treated but the prevention. There’s no doubt in my mind it’s to do with Wenger’s flawed logic. Too much power, too much authority to run training sessions his way etc. etc. Just goes to show what a colossal mess can be made by giving one man the keys to the city.

Now we know why Arsenal bought Arteta and Das Perminator.

Seriously; there has to be a problem with our medical team, the Emirates pitch, our training pitches or training methods. It’s no longer a matter of bad luck, they have to find the cause and sort it out. FFS!!!!!

You might be right, because I saw Fab take some hard tackles and his hamstring’s just fine.

Pretty sure in Fab’s case the hamstrings connected to the heart-string……for all his sweet talk now about Arsenal and Wenger, his behaviour during the summer cost Arsenal 15-20M. The communication between Fabregas and Barcelona was an open secret…..encouraging texts from the President for goodness sake. Barcelona team member pressurizing through the media. Perhaps the reason Wenger encouraged the sale was he saw Fabregas’ hammy was not going to improve until the colour of his shirt changed……and hey, just a little Barcelona air was all it took….its a miracle!

Wtf is arsenal medical staff doing, why are we worst when it comes to injuries year after year? its like for every step forward shit like this happens and nasri is a cunt.

At least we got what Nasri’s worth.

Fabregas is the cunt.

Who cares about Nasri? Arshavin is the biggest cunt because we’re still playing his wages the lazy fat fucker!

You have to ask questions about the medical team. RvP, Vermaelen, Jack and Diaby all suffer prolonged spells out with ankle injuries. In all cases, the club kept saying “just a few weeks”…which turned to months. WTF

It sounds silly but why does this shit always happen to our left footed players (other than diaby)?

I cant believe this shit…Fucking hell again!!! I also heard Theo pulled a Hamstring and is out of contention for the game vs Wales…Something is not working and some of our players get injuries if they take a dump! So we bought players and we are missing three important players again!! unbelievable!

Gooners, the only solution to this curse is to raise our hands way way up and beg football-gods to forgive us for raping spuds mercilessly for all these years! Amen to Na$ri is a cunt!

“Oh injury. It s like a new player left.” Fuck man. Arsene always say “it s like new signing when a player come back from injury”

That comment is getting seriously old now… it’s not clever any more.

Worse case scenario:
1. Per injured
2. Arteta injured
That’s it. Another 8-2

I think Pete is right, it could well be training methods. I don’t believe it’s the ‘up it at them’ way other teams play against us, I don’t believe it’s out medical team (though they should be investigated anyway) and it’s not an Ashburton Grove curse. I think the training methods are perhaps a bit too much, a couple of players have mentioned it before- and I know how physically demanding this league is but perhaps it is the training? Perhaps the pitches we play/train on are damaging the players’ tendons? This HAS to be looked into from the top,… Read more »

And I have heard from a reliable source that Na$ri is indeed a cunt of the highest order. Henry Winter to confirm shortly on Twatter

Oi! You stole my name! Git!

I would like to state categorically that my username is not for sale at any price. If you sell your best username, how can you call yourself ambitious?

I can now confirm my username has signed for man citeh for a fee of around £25 million. . . .

My u$ername is a cunt

This really is depressing. Just when things seem to be getting better, the really bad news surfaces. Ps; wilshere had better go in 4 d surgery too so that we don’t waste precious time with him on the sideline.

It’s the away kits there just shite!

Rvp has his own personal trainer as did fabregas- what does that tell you?

Witoldo
Reply to  She wore

o my lord, god save the queen