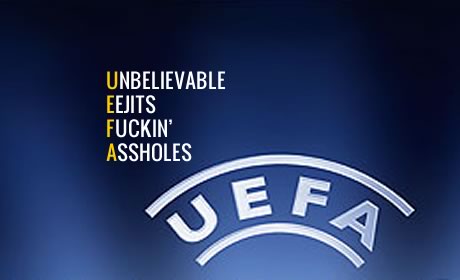 UEFA today provided more evidence that they are a pack of hapless, idiotic, window-licking, making it up as they go along, cretins by rejecting Arsene Wenger’s appeal against the two-match ban handed down to him for talking to the person next to him.

In a statement released today they said:

Wenger will now be suspended from carrying out his duties at Arsenal’s next two UEFA competition matches – the UEFA Champions League group stage games against Borussia Dortmund and Olympiacos FC on 13 and 28 September – in accordance with the decision taken by the UEFA Control and Disciplinary Body on 22 August.

The manager was awarded this suspension for not abiding by an earlier decision of the Control and Disciplinary Body during the Udinese home game – in which Wenger was serving a one-match ban imposed following Arsenal’s final UEFA Champions League game of last season.

And UEFA’s hilarious japery doesn’t stop there. As well as upholding Wenger’s ban, they have fined the club €10,000 for ‘improper conduct by their officials’ during the Udinese game, despite the fact Arsenal – at all times – cleared everything with them.

It might be worth re-reading this piece which explains how the difficulty on the night was caused by the inexperienced UEFA delegate, but rather than holding their hands up and admitting that, Platini’s Pricks have punished Arsenal.

This is what happens when you mix a egomaniacal head honcho like Platini with the kind of pencil pushing adminstrators that weren’t quite good enough to make it to an EU job and therefore have an acute sense of personal failure so take advantage of every tiny little bit of power they can to make themselves feel important and worthy when the reality is they’d be better off topping themselves and taking whatever fragile minded children they’ve spawned with them. It’d make the world a better place.

We watch with interest to see how they punish those involved in racist chanting last weekend.

I think a large part of the blame here has to go with Sky, who dramatised the whole thing beyond belief.

But that doesn’t detract from Na$ri being a cunt.

Will be interesting to see what Wenger says about this. Got a feeling that we are not just going to lie down and accept the ban…

[…] one bad new follows another, and UEFA has rejected Arsene’s appeal against his touchline ban. Come on……there has to be a conspiracy against Arsenal. Arsene has stated over and over […]

Remember Fergies touchline ban last year, he was blatently using a fucking phone to talk to his chums on the touchline. Sky say anything about that?

Yes, though that was the FA, not EUFA, so it’s a different set of rules altogether. Regardless of that, Sky are a bunch of cuntasaurus’

The hell is wrong with UEFA, oh wait, everything….

Bulgarian FA are to be given a large grant to help reeducate racist fans through a wide scale renovation of the top FA official’s private homes and a small scale course entitled: ‘how to maintain the clarity of your message through drawing bananas on tarpaulin.’ Sergio Biscuits, Uefa’s Head of Racist Cuntery, shall teach on the course with the assistance of a team of highly trained Uefa helpers who will help him not fall over whilst groping his face constantly, as well as ensuring no-one breathes on him, lest he shatter into a million racistly charged cunticles.

Can I be a cunt and point out you spelt Unbelievable wrong.

No you can’t as only nasri is a cunt. Well and platini and the barca chairman and bentner and ok you can if you want to then.

Is it paranoia if they really are all out to get us?

And that Na$ri is a cunt eh

Hello Fellow Gooners, for me personally i don’t trust UEFA,it is an organization that has been tainted over the past few years now, I feel they nearly stitched us up in regards to the champions league qualifications where the ref gave a penalty to udinese. Our club keep going on about the rule that will come into effect from 2012/2013, where clubs spend what they earn. I don’t trust these people, the rule will be found out as our defence had been found out.They are just making a mockery of themselves . our club must not hope on UEFA,cos they… Read more »

i think we can echo Bill Hicks’ sentiments here:

“if you’re in FIFA or UEFA…..kill yourselves!”

Here’s to Plattini and his fellow twats: You made Na$ri look like a lesser Cunt! That must be an achievement!
Ps: Nasri is a more reliable Cunt anyday!

who should kill themselves first though……..hard to decide between fifa and uefa or marketing and advertising cunts…..im going with the latter for now

Doesn’t surprise me this has happened UEFA have been complete dick heads to several clubs before the tournament has even kicked off like Fenerbache who were kicked out of the tournament for an alleged match fixing and have been treated as guilty before even being proved guilty of match fixing.

Why does everyone assume arsenal fans are paranoid?

Just because we’re paranoid, doesn’t mean they’re not out to get us.

This has been coming ever since Little Napoleon Platini tried to make it a personal mission to target Arsenal for the Eduardo dive versus some irrelevant minor Scottish club a few years ago and was made to look ridiclous by Wenger who threatened to use legal means to ensure that henceforth every dive was treated in the same way. If you remember, LNP retreated faster than his namesake from the Moscow winter as this meant he would be unable to use his personal favouritisms/enmities to bring about his peculiar form of quasi justice.
The cunt.

This is not a great surprise coming from UEFA. When Arsene received his first ban ( for the Udinese game but relating to the CL game at the Barca) I wrote to UEFA via their feedback page, stating that with all the racism and bigotry in football, they could concentrate on that subject, rather than prosecute AW whispering sweet nothings to his staff. This whole ban story started during the BARCA game when RVP was sent off by a Referee, one of UEFA little soldiers, a Referee who wanted BARCA to win, and AW more or less told him so.… Read more »

I think we have to stop using the word cunt for almost everyone that upsets us as it’s taking something away from the nasri situation. It feels diluted as he really is a cunt and don’t want him getting upset with us

But there are so many of them and so few words in the English language with sufficient force to describe them so succinctly. Open to suggestions though..
Perhaps we should ask Friend Nasri what he thinks after we play them at home…

should they not call him ‘Mr [email protected] in their statement. seems ignorant to call him wenger

Nasri is a world class CUNT.

I had to look this up, but the collective term for 8 or more cunts is a shower. So:

Add to the list,
Gallas
Pique
Pepe Reina
Steven Taylor
Blatter
Pulis
Allardyce
Sky teleprompter readers
Anyone who played for liverpool before 1990 & now works as a pundick
& Busquets to that list.

My dear old dad used to say to me, ‘ son, if it looks like a cunt and talks like a cunt, chances are, it is a Uefa Administrator.’

I used to think he was talking nonsense but who’d have thought his words would ring true years later.

Brian Woolnough and all self important self referential hacks appearing on Sky’s Sunday Supplement.

Yes, yes and yes. Any and all of the above.

Mine was a sample list ( a snatchshot?), whilst waiting for my cheese on toast to cook, rather than an entire Cuntipedia, if you like.

Brilliant mate, made me spit my coffee! Very funny indeed.

Brutus for shagging my olive

I’m sure they told AW that it was OK to do what he was doing just so they could turn around and suspend him again.

Cuntipidia, love it! Stick Glen Cockerill in there too, I bet that foul mouthed cunt thought long and hard about disrespecting Paul Davis’s mum while waiting for his jaw to heal.

I can’t believe this. We must have mentioned 30 cunts on here without so much as a sniff of a John Terry! Or a Rooney. Complete Na$ris

Mr. Blogs…if you don’t realise the commercial opportunity for “Na$ri is a c**t” teeshirt for your online store. A xmas #1 for sure…

Boys,boys, boys, Girls, girls girls. Please lets take a time out!! I was amongst the earliest of gooners calling na$ri a cunt, i was heavily criticised for this. Which was ok, now i have had time to think about it. Because as most of us fellas & some of the girls love a cunt!!!, But i fully understand the vective, but it got me thinking, 1. Would i like to place one of my digits upon na$ri, eufa officials, etc…FUCK NO!!! 2. Would i like to place my mouth anywhere near the same suspects…NO,NO, FUCK ME NO!!! 3. Would i… Read more »

A well argued case Snowytunnel. The court finds in your favour.

Smalling and jones for joining the mancs before us the cunts

Thank you MC, glad you agree.

Eric can i remind you, the word scabby applies to the cunts you mentioned….lol

OMG OMG….I can’t believe you gooners forget about the original cunt!…..David bently!! …I though he is cuntier than Na$ri! But then again I might be wrong…!

The height of the cuntery in this world just gets me down sometimes.

[…] stand against the scourge of the game – people talking to the person next to them. They have upheld Arsene Wenger’s ban and he will now be banned from the Dortmund and Olympiacos games on the 13th and 28th of […]

What a bunch of mummy jabbers would this happen to Barca or Man U also guys lets not forget that Na$ri is a cunt !!!!

Personally, I think Na$ri is a massive, dripping, fish-stinking Platini.

Actually, it’s probably the other way round. Na$ri is just your common or garden cunt, whereas Platini is a Goliath Cock-Gobbling Cunt Spider of gargantuan proportions.

Vermaelen out for two months, first impressions of Arteta, an Afobe loan and… a protest? Really? | savagegooner

[…] other news, Arsene Wenger’s appeal against his UEFA touchline ban has been rejected. How idiotic. I’m not even going to begin with this one, save to say that I really do think […]

If there is a footballing god in this world, he must hate Arsenal, and today’s Featured Profile: Oxlade-Chamberlain | Being Arsenal FC Bystander