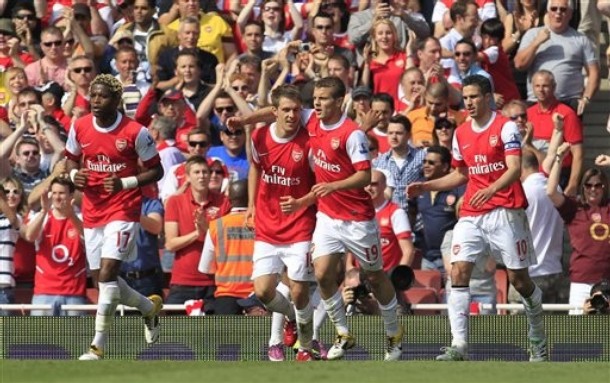 Aaron Ramsey believes that Jack Wilshere’s extended absence is a major setback for Arsenal, but hopes that the England midfielder will regain fitness as soon as possible.

Wilshere has been ruled out of action for at least two months, having already been sidelined for six weeks having limped out of the Emirates Cup.

Speaking as captain of Wales ahead of their Euro 2012 qualifier with England at Wembley, Ramsey told assembled press:

“I know he’s been struggling with his ankle. It’s a big blow, he had a massive season last season he showed to everyone what he is capable of doing.

“I thought we played pretty well together in pre-season so it’s a big blow for us and Arsenal. Hopefully now he can just get back as quick as possible and makes a speedy recovery from it.”

In a separate interview answering questions from Gunners fans on Arsenal Player, the Welshman also outlined what he felt he needed to improve upon this season, while maintaining that the team as a whole needs to get stronger defensively.

“Defensively [is an area]. Knowing what sort of position to take up when we’ve lost the ball and to help keep the shape. I just want to improve that.”

“I think the way we play in an attacking sense is really good, we create lots of opportunities. Maybe we just need to tighten up as a team and stop conceding sloppy goals like we did at the back end of last season.”

A big blow sure, but Ramsey’s got to take his chance now.

In other news, I saw somewhere that Na$ri is a cunt? Yeah, that.

Yeah I heard that Na$ri is a cunt too, can we get confirmation on that Andrew?

[…] feel you too Wilshere. So does Ramsey it seems. The Welsh skipper believes that it well, sucks. He […]

he scored an absolute corker for the welsh on the weekend. charging into the box, sweeping it in. top work from rambo, hopefully he’ll be doing that a few times for us this season.

Just like Jack took His chance when Aaron got “Hacked Down ” Now it’s Aaron’s turn to show what He can do in Jack’s absence.

I can also officially confirm that the following people are class A cunts:

I hope you all agree

Agree, what about cuntcross of Stoke

I would like to put in a requestfor Nani to be included in that list if you don’t mind. As well as Rooney

Not to mention $Amir ‘the dyke’ Na$ri, king of cuntopia.

Seriously guys, this whole Na$ri is a cunt stuff is kind of getting…well y’all know what I was gonna say.

Exactly. Like a fine wine, it gets better with age.

Nasri is a boring cunt?

I think worrying about the season is a waste of time. Whatever happens, happens. We should focus our energy on things that are important, like climate change and Na$ri is a cunt!