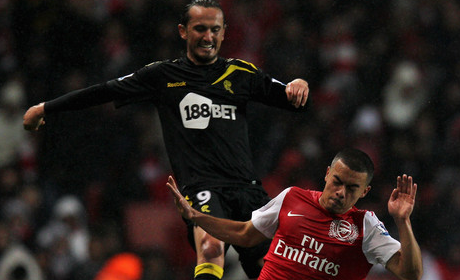 Contrary to last season, when only a small number of youngsters were called upon, Arsene Wenger has reverted to his usual Carling Cup policy of, at least in part, providing promising players from outside the first-team squad with their initial experiences of competitive football.

Last night, as Bolton visited North London in the Fourth Round of the competition, Nico Yennaris was handed his debut at right-back, with the 18 year old, whose preferred position is in central-midfield, acquitting himself well, pushing forward when provided with the opportunity and also making several impressive interceptions.

The other full-back berth was occupied by Ignasi Miquel, who was making his fifth senior appearance for the club. Like Yennaris, although he was not operating in his preferred position, the Spaniard gave a good account of himself and was not fazed when encountered by Premier League opposition.

In the second period, after Andrey Arshavin and Ju Young Park had inspired the Gunners to take the lead having gone a goal down to a strike from another Academy graduate in Fabrice Muamba (who, incidentally, also cut his footballing teeth in this competition) , two further youngsters were introduced to the fray.

Oguzhan Ozyakup, on for his second competitive appearance, was assured in possession as Arsenal held on to reach the last eight and, as the game drew to a conclusion, Daniel Boateng had the honour of replacing Thomas Vermaelen for the final few minutes.

Chuks Aneke, who came on against Shrewsbury in the last round, remained an un-used substitute on this occasion, as did Sanchez Watt and Jernade Meade, the latter earning his first call-up to the squad.

What will the next step be for this generation of youngsters? Well, the likelihood is that, regardless of who Arsenal are pitched against in Saturday’s Quarter-Final draw, Wenger will, injuries permitting, call upon a considerably stronger side as a chance to repent for last year’s Wembley capitulation draws ever closer.

The younger players are, then, less likely to be involved, and, with many of them having been regulars at Reserve level for at least 12 months, the time would seem right for at least a few to bolster their experience by going out on loan.

Watt has already had spells at Leeds and Southend, and, having recently signed a new contract with the club, will be seeking to prove that he is still capable of prevailing in the long-term.

For the others, though, it will be their first experience of life outside of the comfort zone of Arsenal’s London Colney training ground. They will be plunged into lower-league life, and, particularly for the foreign youngsters such as Miquel and Ozyakup, this should enable them to adapt to the intensity of the English game.

Meanwhile, their temporary departures will allow players further down the system, such as Zak Ansah, who scored the only goal as the under-18s beat Chelsea in a friendly at Emirates Stadium last weekend, to push into the Reserves on a more regular basis.

I’m starting to feel a lot more positive about the youth coming through again. Not that the quality of the academy was ever questioned in my mind, but it has seemed a bit harsh on those that have been called upon by the 1st team in recent times. Miquel looks quality, and now has at least 3 more senior, high-level CBs ahead of him to learn from & allow him time to integrate more slowly into the team.

I don’t really know much about Boateng.. Does anyone know how he’s supposed to compare with Bartley?

I wish AW would loan some of the younger players out to Premiership squads. That would give them the top flight experience and their footing instead of The Arsenal having to go through the period of awkward adjustment. Recently, it worked with Wilshere.

Surely the clubs would ask to have the players on loan (just like with Bolton and Wilshere). Wenger will also send a lot of players to feeder clubs or those that play the “Arsenal” way in the lower leagues. Less pressure to be the next star player and so they can learn a different style of football and learn about other clubs ambitions.

So Park CAN play! So why has he been hidden away this season? Why has that useless pile of mierda Chamakh been selected ahead of him earlier? The Korean deserves an opportunity in a few league games now.

And Arshavin deserves to start more games in the middle.

If you’ve played PES before, you would already have known our Park is a god.

Wonder if that cunt Na$ri enjoys starting in the glorious Carling Cup 4th round? And being left on the bench on Sunday.

Suspect he enjoys the increased wages, like all mercenaries.

Ok guys look, I’ll say it because someone has to say it and everyone else seems a little shy.

Fuck Samir na$ri. I don’t give a shot about the snively liitle cun anymore. He left the arsenal. Fuck him. Some of you guys are obsessed with this fucking wanker. Let him
go. I hope he has a wonderful next three years or so being Gareth barry and James milners back up. Hahah that is truly pathetic.

So one more time just to male sure were straight, fuck nasri, let it go.

Agreed frog fuck them, barrys & milners back up haha

I don’t like him either…but parting shots are always fun.

Anyone else think in a couple of years when he’s loaned out to Caen he’ll be saying he never should have left in the first place?

I will cease and desist with all future comments about the cunt!

agreed. i couldnt give a fuck anymore. like when sites put cesc fabregas articles in the arsenal section? i couldnt give a fuck if he called kanoute a terroist in his shithole league. its got nothing to do with arsenal anymore and if it aint arsenal, i aint listening. COYG- lets burn the bridge down this weekend.

Exactly. They’re like birds. When they leave, fuck em. Move on and find a fitter bird. They both chose to leave and they may have had their reasons, I don’t give a shit. I support one football team. If you ain’t on it…………

Better to fuck em before they leave??

I disagree. Thierry Henry was an Arsenal player, and he’s a Gooner. He’s now playing for the New York Red Bulls, so he’s got nothing to do with Arsenal anymore right? Wrong, he was a legend. The same logic applies with Cesc Fabregas. He still likes – or maybe loves – Arsenal Football Club. I thank Cesc deeply for serving us for the past years even if he left us for Barcelona. I care for him through a form of gratitude from his loyalty to us and to Arsenal Football Club. Samir Nasri I do not really care because he… Read more »

smeer nashit can go suck clishit 4 all i care either u ar 4 us or against no middle line(excpt pires henry)who else?

Samir nasri is nothing like Thierry Henry or Tony Adams. Those guys were loyal servants to the club for many years, who proved their commitment to arsenal many times over. Nasri is a money grubbing cunt who doesn’t deserve to have his name mentioned in the same sentence as Henry and Adams. That’s a pathetic comparison.