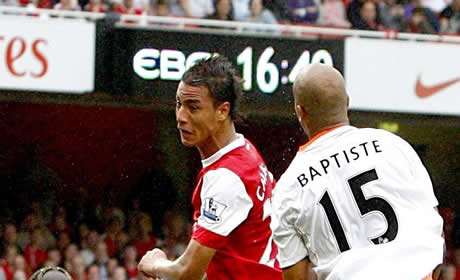 Arsenal will be without striker Marouane Chamakh for tomorrow night’s Champions League game against Marseille.

The Moroccan is sidelined with a knee injury according to Arsene Wenger, meaning the chances of resting Robin van Persie diminish. Wenger could decide to play South Korean Ju Young Park, who impressed in the Carling Cup against Bolton, allowing the Dutchman some recuperation time following his heroics at Stamford Bridge (where John Terry fell over).

However, it seems likely van Persie will start the game with Wenger extolling his goalscoring virtues and the contribution of the players around him to his incredible recent record.

“Robin is an exceptional player who takes advantage of the fact we have attacking team that works hard for him,” said Wenger. “It’s no coincidence that when a player scores well it is because the team does well. Our style of play creates chances”.

Both Carl Jenkinson and Thomas Vermaelen are also fit for tomorrow’s game while Yossi Benayoun returns to the squad having been prevented from playing against Chelsea because of Premier League rules.

Would like to see Park over RVP (for no other reason than rest!), he could do with a rest after the amount he has been playing. After all, this is probably the best opposition to play Park against. French opponents who Park will have been playing against before arriving at Arsenal.

dont wanna be an asshole but Djouru was very worrying against cunts. Hope Sagna recovers sooner.
I would give Park a go. RVP deserves a rest or else he might have a dip in form with all the pile up.
One love Arsenal. One love RVP10. COYG!

Thought he did well playing out of position, seeing as he’s more of a reader of the game than the all action Kos or TV5 he was given an incredibly challenging role considering his attributes and that’s his second go at right back for us. Thought he grew into it before he got substitued, it’s quite good to know that we’ve got decent options behind Sagna now with Jenkinson and 3CB who can fill in.

Just heard that Chelsea bellend andy Jacobs saying Theo s goal was lucky and generally slagging us off, he sums up everything I hate about Chelsea.I d love to see them finish outside the top 4

PS. One love ARSEBLOG !
“Where John Terry fell over”
It’s the start of an ERA for The Arsenal…Our Arsenal 🙂

I wonder has he actually snuffed it but the club dont want to let people know?!

I believe Diaby is to busy right now posing at the Arsenal Training Ground while workers make a statue of Diaby for the Arsenal Medical Center.

ALL HAIL KING DIABY! MAY HIS INJURIES NEVER DIE! (Some one right that in Latin)

Think it might be worth a significant shuffle, it’ll have been fairly little time, so with the group going well and Tuesday game presumably having been fairly knackering wouldn’t be suprised to see an altered side. Almost the team we played against Bolton in fact but load the bench with 1st teamers in case of sticky situations. Park Arshavin Chamberlin-Coqulin-Frimpong-Benayoun Santos-Verm-Djouru-Jenks SCZC If this team plays well we might be able to bring RvP off the bench again in our next league game, might feel a bit excessive but if Park can keep scoring and RvP can be kept fresh… Read more »

Why not just write a whole Fucking blog!?!

Cause that’d be muscling in on bloggers patch. Anyway, s’relevent to tuesdays game and the state of the squad.

Don’t be so rude

Scribblers – Why would you have Park in goal and Sneezy upfront? ;o)

Not a bad team that scribblers but will he risk not finishing top of the group which we will if we win both home games then he can play who he likes against the Greeks I might even get a game!

Scribblers
Reply to  She wore

Three game’s in eight days requires a bit of rotation and I’d say we should be prioritising three points in the league at this point. We’ve got to keep them comming, falling out of the top 4 next season would be such a total calamity.

Chamakh is still playing for us?!
I thought he died a long time ago.

definitely should have saved that comment for they mythical diaby start

I personally would love to see more of Park. Let’s finish top and avoid a draw like last years. At this point in time though, I feel like we can beat anyone!

i had a dream where ac finished above farcalona, and the inevitable happened.

in my dream we kicked their ass, as cescy got substituted and had to watch his champions league end at our hands..COYG!

It’s been a poxy few months which I think makes it even sweeter at the moment, I got a massive bill this morning but all I could think of was that ku klux Klan idiot falling over!

ScotchEggsRule
Reply to  She wore

EB: Baldrick I feel like a Pelican. No matter which way I turn I’ve still got an enormous bill in front of me.

I think Park should start against Marseille, give RVP a rest and keep him fresh for the battle 4th which is priority. I think we’ll qualify for the latter stages of the CL and Wenger has called this game a ‘cup game’ but I don’t agree. Every PL game is a cup game at the moment. If things aren’t going our way then bring RVP on from the bench. Players like Gervinho, Arteta, Song, Vermaelen etc. should have enough to do Marsille over.

Arsene’s not likely to field a ‘weakened’ side tomorrow as he said that the chavs game and this one where ‘two cup finals’ i.e we best fukkin win these lads! So, as much as i want to, dont think weel see park, ryo or any other fringies given a place on the starting XI mate.

I would say we have to rest RVP and more to the point we need to take whatever chances we have to try and bed in a ‘Plan B’ if RVP (touchwood) gets injured, suspended etc we need to be able to fill the gap as effectively as possible. Park seems the best option and we can play the same formation with him sitting in there. I would start with Park & Arshavin ahead of Gervihno and RVP and see how we get on… Marsaille looked poor last time so we should turn them over at home. Last point, as… Read more »

While RVP will need a rest at some point, if we win this game we’re in a really strong position. I would definitely play him. Also Arteta and Ramsey don’t get the credit they deserve for the way they’ve played recently

Agree, so could we not try a smilar model to what was attempted against Stoke? Bench him, then bring him on for 20-25 minutes at the end if we really need goals.

I’d like to see Park start and do a full 90 tomorrow.

It always concerns me when players are rested, where you’ve the potential that they come off the bench and pick up a strain or tear as they’re not properly warmed up.

Gives me the heebie-jeebies thinking about that happening to RVP.

He should be putting out a full strength team for this match, finishing top is a must, remember last season……Barcelona……..!

Please rest rvp and start park, like Sunderland and chamakh.
God it feels good gloating this glorious day. I’ve seen the game about 20 times and made Chelsea fans who work with me watch it as well on their lunch break.
Fucking superb.
I wonder what talkshite got to say about this!

Karim
Reply to  Pele of Romford

Fantastic stats compilation as aywlas Tim, a really interesting read.Quick question for the uninitiated though, what is a turnover’? From context I gather it’s linked to being dispossessed but could you possibly confirm?RVP did steal the show but Gervy’s contribution has not gone unnoticed. He’s winning MOTM votes on the official site! For me, he’s a fantastic player whose potential has aywlas been there trying to break out, he just couldn’t quite find end product to his play until now. He certainly turned that around in the space of one game! I thought Kosc was immense too, authoritative and reliable.… Read more »

twcpuoiz
Reply to  Pele of Romford

Park should be a given a chance- he should be used to playing against French opposition.
And Van Persie deserves a rest .

Van Persie must start the Marseille game. It is vital that we don’t repeat last year’s error by easing up and then finishing second – we want Barcelona in the final! We should rest RvP at the weekend.

Chamakh is history at Arsenal; I just don’t see how you can justify playing him ahead of even Park.

Talksport are going with ‘ the art of defending is dead ‘. No mention of how well we played, just that we conceded 3.

I know this point has already been made in the comments but I would love to see Park get the nod tomorrow ahead of Van Persie. Just to give the guy some rest and also give Park a chance to show us what he has got. He looked great against bolton a week ago and I would love to see him play with our otherwise strongest squad and not just in the carling cup games

John Terry fell over?!? Really? Do we have any video of that?

Seems to be about 1% of the comments here so far are actually about Chamakh! Seems like everyone has forgotten him… again. Is this an injury or an “injury” like Almunia had? I would really like to see him hit the form he started with last season. As long as he’s an Arsenal player I want to see him succeed. I want to see every player do well for us. He appears to be a confidence player so other Gooners moaning about him certainly can’t be helping. I understand why, but we need to get behind everyone in the team… Read more »

agree, he was blistering at the start of last season

some danish bloke, forget his name, but he’s definitely the best footballer on the planet

ScotchEggsRule
Reply to  the only sam is nelson

Have a feeling RvP will not want to be rested. Arsene should rest him, Per and Arteta.
‘where John Terry fell over’. Can’t stop laughing!

Arteta at centre back? Err, dude likes a tackle but, um somehow I think not. Per and TV5?

Look at our schedule: We have West Brom at home on Saturday, then an Interlull (Holland plays friendlies on 11/11 and 11/15), then Norwich away on 11/19. Not exactly too crowded.

We need to finish top of our qualifying group. A win here would go a long way toward making that a reality.

Of course, you start RVP tomorrow. Rest him against West Brom if you must.

[…] game and wonder if this is the time to give Robin van Persie a chance to recuperate a bit. With Marouane Chamakh missing with a knee injury the only option up front is Park, and with the manager talking up the need to take the points […]