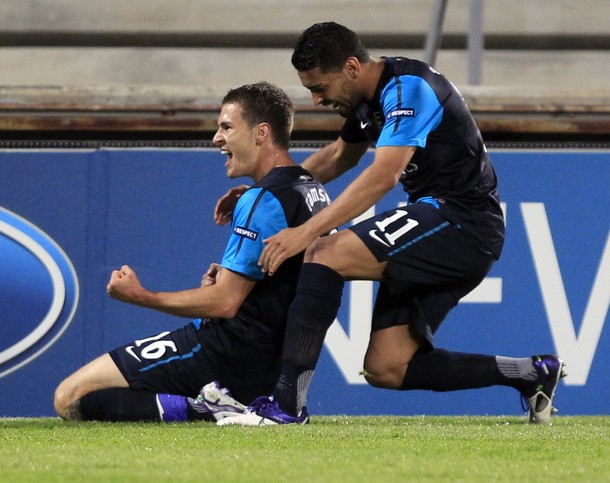 Arsene Wenger insists that young Welsh dynamo Aaron Ramsey can only get better after proving his potential with a tremendous performance against Chelsea on Sunday.

The 20-year-old played arguably his best game in an Arsenal shirt at Stamford Bridge pulling the strings behind Robin van Persie, playing incisive passes to the likes of Gervinho and Theo Walcott and on several occasions bursting behind the opposition back four himself.

Finding his feet after two months as a regular starter at the Emirates, Wenger told assembled press ahead of tomorrow night’s match with Marseille that the former Cardiff City man appears to have finally overcome the fitness problems associated with his horrific broken leg.

“He is on the way up,” said the Frenchman. “Aaron was out for one year when he was just getting into the team. That is tremendous. It is completely normal that he improves now because he is young. And there is still a lot of improvement for him.

“Secondly he is back to his full physical potential which is huge. We see that when we analyse the games. The worry we had is that he might be touched by being out for such a long time when it comes to the challenges. I have been impressed by the way he dealt with the whole situation.”

Having scored against both Tottenham Hotspur and Marseille and made a number of attacking assists in other recent games, Arseblog News has to agree with Arsene that Ramsey does indeed appear to be on the way up, despite having an horrific tattoo on his leg.

That he has shouldered the burden of being the creative hub in a side which until a few weeks before the season started had the likes of Cesc Fabregas, Samir Nasri and Jack Wilshere to call upon is no mean feat. Let’s hope he can stay fit.

Despite all that, I have a sneaky suspicion that having been put in front of the press today he’ll be on the bench tomorrow.

Careful with those headlines arseployees!

makes sense if we rest RVP and Ramsey. Maybe even Scescny could get a little rest, get fabianski in to get a taste of things.

We have excellent players in rosicky and arshavin that need some pitch time. Maybe even Park could get his first CL. Its not like he having played agaisnt marseille before….

So ill say he rests RVP, Ramsey and i think we’ll see kocielny get some rest as well with vermaelen partnering with Mertesacker.

what is it with footballers and horrid tattoos?

Does Jack have tatoo’s? I remember Fab only got his out of a need to fit in with the other Spain players, went away all fresh and bright eye’d. Came back with a beard and poor body art.

Is Rambo’s “art” on the leg that got orc’d. Cause frankly he can do as wants on that one.

it’s on the other leg.
I guess he had a lot of time on his hands when he broke his leg. Sorry, I meant when that lumbering, clogging, dribbling, orc bollock broke his leg.
The kid is looking a very good player. He also seems very mature for his 20 years.

If I remember correctly, Wilshere has one on the underside of his elbow like where a lot of players have. Frankly I think it’s a bit wankerish but I’ll just ignore it for our players.

Can’t wait until jack the lad is back amd both of them together. Ramsey was a actually ahead of him until that inbred cunt broke him. thank jeebus that Rambo is starting to look like that player again.
Strengthen a bit more (which im arsene will) and we’ll be back up there at the top where we belong. With Wenger in charge.
C’mon u reds!

ScotchEggsRule
Reply to  Pele of Romford

Can people please come back down to earth? This game will not be a breeze tomorrow, so we cant afford to rest rvp! We need to kill this group off as soon as, lest we get a repeat of last year!

true that. champions league is important.

“he is back to his full physical potential which is huge”

Found a signed picture of Rambo in my car. My dad got given it by a spurs fan in Cardiff Council. I worry it’s poisoned. Or if I scratch it Rambo’s face will peel off and be replaced by an angry looking spurs monkey lookalike who also plays for Wales. Rydw’n caru Aaron Ramsey achos maen Aaron yn bendigedig!

Ramsey and Wilshere for the next ten years. Arsenal’s Xavi and Iniesta.

Hope Arsenal start Park tomorrow upfront but still put forth a very strong team. We need to win this one and B. Dortmund at home so we win our group and move on very strong. Also if we win these two we can play the Carling Cup crew at Olympiakos just like we did two years ago. Good way to grow up.

wtf? the mail says “Ramsey opted to have the tattoo on the opposite leg to the one he broke against Stoke in February 2010”

and there i was thinking that lumbering cuntbucket shawcross broke it

at least our very own PHW has the class to offer his exclusives to the daily star, quality read of choice to the old etonian of a certain vintage such as it is

I’ve been very impressed with Ramsey, he is talking his chance with some solid football since Wilshires injury. Some intelligent and composed final balls too. I think we should start a with a strong 11 tomorrow and nip qualification in the bud. I’d like to see Kos and The Verminator at centre half, Jenkinson should get a start and I’d like to see Park play too, but from the bench. This isn’t the game to take our foot off the pedal in my opinion. Oh yeah….. Whilst I was watching John Terry fall over again I remembered $amir Na$ri was… Read more »

He’s been great in the past few games. He really seemed like a fish out of water in those first few games of this season, but he’s bunkered down well and really improved his play. He should still be rotating with Rosicky as he is still young and learning his craft, but for the big games, he’s proving he deserves to be in that starting 11. Well done Rambo. Keep it up! Denilson and Diaby haven’t been able to push on after the criticism, so big credit to Rambo for upping his game!

NOTHING HORRIFFIC ABOUT ST MICHAEL (tattoo on his leg)…known in the bible to be Gods leading soldier, and known to be inspirational to Aaron in recovering and getting back into football boots let alone leading our creative engine, post cesc… if you only knew how difficult it is to get a player back to his best or in the reach of potential after breaking a leg..all mthe power to him…PLS GUYS DONT TOUCH OR MOCK RELIGION, im assuming you didnt know wot the tattoo was about or for, so il leave it be, n at times wen i watch our… Read more »