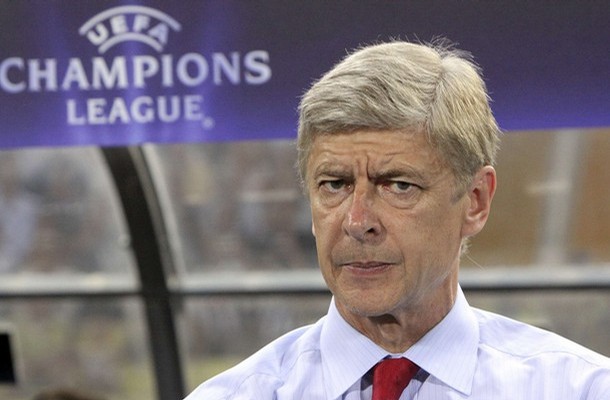 Arsene Wenger insists he has no intention of leaving Arsenal before the end of his current deal, thereby dismissing suggestions he could be lured back to France by Paris Saint Germain in the near future.

The French coach has three years left on his contract at the Emirates and despite hinting last year that a boardroom role at the Parc des Princes could be attractive, made clear that he would, as always, honour his commitment to the Gunners.

Speaking to the media ahead of tonight’s Champions League clash with Marseille, Wenger laid out his intentions to stay in North London until at least 2014, while insisting that his relationship Sheikh Hamad bin Khalifa al-Thani, the Emir of Qatar and owner of PSG had involved nothing more than the sharing of advice.

“I have three years to go with Arsenal and I always respect my contract,” said the 61-year-old.

“I have known Al Kalifa and Al Jazeera [the TV station] for a long time and I advised them at some stage when they wanted to go into football, buying television rights and things like that.”

While many lesser men may have been crushed by the weight of pressure heaped on him over the last few months, or indeed heaped on himself, Wenger also stressed that dealing with adversity was part-and-parcel of succeeding as a top level manager.

“A career in management prepares you to fight against adversity. That is for sure.

“It makes you stronger or you get out of the job. It is as simple as that. What helps you is that you believe in your passion and mental strength.”

oh fukk. Is this a warning? Still think this is his last year. Thx god for it. We need a change and this man has no ideas anymore.

Wow, is 71 thumbs down some sort of record? Well done arsenal4ever lol

This is totally on point! I really wanna see Arsenal get out of this crisis period and I trust Wenger is on top of it all

Arsenal4ever… You obviously have no idea about football. Arsene is one of the top managers around! We’ve just lost our 2 best players from last year, give it a fucking chance! IN ARSENE WE TRUST!

No, not all Arsenal supporters trust Arsene anymore. Many of them think he is indeed one of the best managers in the world, but that his time has been and gone, however great it may have been. Doesn’t mean they have ‘no idea about football’. The shouty, CAPS brigade gets a bit tiresome, whatever the issue in hand that’s being ‘discussed’.

It’s going to be a sad day whene Arsene leaves… But I hope that than we can lure Guardiola from Cuntcelona, because I heard he is very good whit realising handbrakes.. 😀 just kidding 😉 In Arsene we trust !

I wish he had said something like ‘I have three more…days in Arsenal,’ because frankly speaking I am fed up with Wenger and these one-off wins wont do it for me – this is not where Arsenal FC belongs. But I heard he is been quoted wrongly anyway, it actually was ‘I have 3more years in Arsenal….boardroom’. Not the bench? I’m so happy dreaming.

The only reason that people think we don’t belong where we are right now is because wenger has been so successful. Without him we would probably be thinking that this season was like any other. Don’t forget why we all feel like we should be competing or why we all feel like 4th spot is under achieving or why we all thing our best players should stay. It’s because wenger has made this club into a European power house with some of the best football and most talented players the club and country has ever seen. It might be as… Read more »

Yes of course you are right, Aresnal had never experienced glory in all it’s years until Wenger arrived. The board gave no direction and Wenger laid down the foundations for success.

It’s worth remembering Aresenal won the league 7 years prior to Arsene arriving. If Arsene doesn’t pick up a trophy this season, guess how many years it would be without?

The man is a legend but don’t for one minute think this is Arsene FC… It’s ARSENAL FC.

Fed up of Barca
Reply to  Chris

Unless I’m mistaken we have 13, Wengers won 3, so we had 10 before he arrived

the only sam is nelson
Reply to  Chris

could just be the passage of time, perhaps

but i suspect it’s really down to the interwebs. only being able to moan with colleagues and mates down the pub in years gone by, matchdays were a chance to show a bit of unity and back the team, no matter how shit they were. nowadays it’s non-fucking-stop and everyone thinks they’ve got the answer.

Because George didn’t do a lot wrong. Even when we started playing lame football under Graham he had the tactical nouse to make sure we were tight at the back and could still compete for things. George is a legend, a much better manager all-round than Wenger for me.

Why don’t people get off his back? Or alternatively name manager who could do a better job? I certainly can’t think of any obvious ones. True there was success before him and there will be success after him but hes had the biggest impact on the club out of any managers we’ve had! He’s earned the right to leave when he sees fit, not when a few of the slightly more melodramatic fans have a hissy fit!

…..he and Herbert Chapman.

I have visions in 3 years of us begging him to sign a contract! The irony!

I feel this is a non-issue, really. Arsene has always stressed that he will respect his contract, and history shows that he does. Do you really think Arsene would abandon a sinking ship like this, after all the time and effort he has invested in the club?
He has a lot of pride in his work, and he would never force a move away when the club is on a low. This became a story because the media wants it to be a story.

Wenger is wise. We may not know everything, but he seems to be on top of the game. I think he is the best man Arsenal can trust in.

[…] I guess TV’s contract being lengthened would be met with cheers, only to turn into jeers for some fans when Arsene states his desire to continue for another 3 years. […]

Doubt he would last that long if we do not improve, can you imagine the fans frustrations if we allow Van Persie to leave and not sign adequate replacement?

the only sam is nelson
Reply to  Arsenal Bystander

fuck me the last time we had players good enough to cherry pick was the 1970s. Brady and Stapleton.

Under Wenger we have an embarrassment of top quality players coveted by the world’s biggest and richest clubs. Ever thought: “fuck me isn’t it amazing what a conveyor belt of quality we get treated to at Arsenal, it never used to be like this”?

Three more years. I guess that makes sense, would make it a nice round decade without winning fuck all.

The timing makes sense, with The Verminater extending and Arsene openly committing to his contract again. Now, if only Robin can follow suit

Whatever you think of Wenger currently he is a man of honour and will see out his contract.

I’m sure there isn’t many Arsenal fans who didn’t have doubts at the beginning of the season, myself included. But looking back, I really think Arsene is the only one who could have pulled us through. Although we’re not in the clear things are looking more positive, and although he’s had his faults is there anyone who knows more about long term management (other than Fergie) than Wenger? Besides which it could be worse, Tony Pulis could be our manager.

I don’t agree with that, and if Wenger stays or leave Arsenal Fc will still be here and we may have a bit of fall or maybe not till we get ourselves back on track with a new manager.

But let’s be honest Arsene Wenger really is a legend!

Toughie. Without going all Kafka and poncey, it boils down to what is ‘success’ now? I used to love a trophy. Everyone did and will do again, but given the choice of winning the Rumbelows OR finishing top 4, what’s better (either looks nice at the moment, but that’s a thread on it’s own)? How many players who are maybe looking to move to a club go, hang on, let’s just see if they win the FA cup before I sign up. Whereas it seems some do exactly that with the Champions League spot. So in that context, this is… Read more »

Of course he had to mention mental strength lol I think every Arsenal fan cringes whenever he mentions those two words.

Oh, so Wenger’s gonna stay for three more years? That’s just about long enough to take us into League Two.

Yes! arsenal is not belong to arsene. but arsene has tried he best. and now improvement is coming. if u think u a best from arsene why not take his job. n look what u can do. give him a time to stablise the team. negative critics will not helps. support arsenal.

Remember win the league today is more difficult , now it’s about monney more than tactics.
Manutd with huge debt .or chelsky with the gaz petrol and now city petrol.

The mans a legend done everything for arsenal from training ground up, bought some special players to our club it will be a sad day when he does go, in arsene we trust

urgh this “In Arsene we… crap” is going to make me *boilk*
I don’t recall seeing very many of these people around when a majority were giving it some “Wenger out” with their pompoms.

Personally, I’m still on the fence but I’m more inclined to think it’s the board than Wenger making the bigger mistakes.

Anyway… three years, I hope we use this time to find a suitable replacement. One who can fill some very big shoes.

Yes he brought us success but he also brought us the most expensive tickets in Europe so yes its more then fair that people expect something for the money they fork out to see the team. If he thinks 4th spot is what we should aim for and measure success that way then imo he has lost it.

Personally, I adore the man, and hope he stays in the job for as long as there is breath in his body.