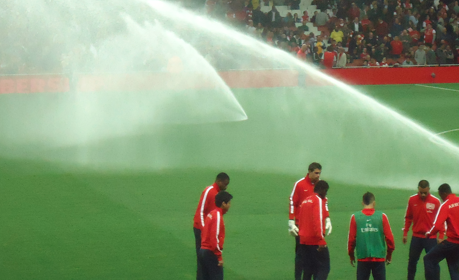 Arsenal Reserves saw their unbeaten start to the season come to an end with defeat against West Brom at the Hawthorns last night, in the final game at this level before the Fourth Round of the Carling Cup takes place next week.

There were some familiar names in the Arsenal side, with Vito Mannone and Sebastien Squillaci returning from injury, whilst Craig Eastmond, who will hope to earn a place on the bench next week, started and completed 65 minutes.

It was a familiar story for the side in red and white, as they struggled to turn possession into clear-cut chances early on and, despite taking the lead through Sanchez Watt’s fifth goal in six games, ended up succumbing 3-1 to what was, admittedly, a very strong and dogged Albion line-up.

There were not too many standout performances from Arsenal’s point of view, although it was notable that Chuks Aneke, who made his first-team bow against Shrewsbury last month, tended to be at the heart of anything constructive going forward.

The 18 year old’s imposing frame threatened to cause problems for the Baggies, but even he struggled to find a way past a resolute defence, although Aneke will be hoping that he has done enough to merit inclusion in the squad when Bolton visit North London in six days time.

Nico Yennaris, cited by Arsene Wenger as a possible back-up option for right-back in the coming months, did not cover himself in glory, with Albion finding the net after the Leytonstone-born youngster dallied on the ball for too long and was subsequently robbed of possession.

It is worth noting, though, that Yennaris is far more comfortable as a defensive-minded midfield player, but the presence of Eastmond meant that he was unable to operate there last night.

Another returnee, Rhys Murphy, emerged off the bench but, rather unsurprisingly given the multiple injury problems he has suffered in recent years, didn’t last for too long before having to be withdrawn again.

The partnership between Squillaci and Miquel, despite the latter making some impressive interceptions early on, didn’t look especially cohesive, and it is likely that Johan Djourou will partner one of them against Bolton next week.

With Kieran Gibbs sidelined, there may also be a gap to fill at left-back in that fixture. Martin Angha is impressive, but still very raw, and Jernade Meade’s lack of height may get punished at senior level, so the most likely alternative would either see Andre Santos starting, or Carl Jenkinson switching from right-back.

The Bolton game is also set to see Abou Diaby make his first appearance of the season as he returns from his latest injury, as Wenger will look to find the correct balance between resting players for the trip to Stamford Bridge that will follow four days later and picking a side capable of progressing to the quarter-finals of the competition.

Eight departures as Arsenal Academy look towards next season

Feel really sorry for Rhys Murphy with all his injury problems

We don’t win even in reserves with Squillaci.

[…] make a flutter. For those interested ahead of next week’s Carling Cup match, here’s a good read on how the youngsters did against West Brom […]

Jernade Meade has looked solid whenever I’ve seen him play, his strength more than makes up for his height in my opinion