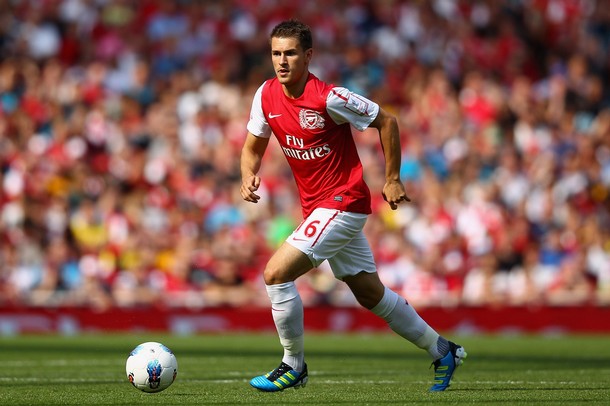 Aaron Ramsey believes he has added pressure on him when deployed as the most advanced midfielder in Arsene Wenger’s side but stressed that both he and his young teammates will continue to improve as the season goes on.

Having watched both Samir Nasri and Cesc Fabregas leave the Emirates and Jack Wilshere suffer an ankle injury which has kept the Englishman sidelined since pre-season, the Welsh international has been a major player in the centre of the park since August; a stunning turnaround following his recovery from an horrific leg break and two loan spells last term.

Taking time out ahead of tonight’s match with Marseille, the former Cardiff City man reflected on the Gunners difficult start to the season, his growing stature in the squad and how he feels he can increase his influence.

“I think I can definitely improve as a player. I’m still improving.” Ramsey told Arsenal Player. “It has been a tough start for us; in certain games we’ve done really well and then in others we’ve not had the greatest of performances.”

Often playing just behind striker Robin van Persie, Ramsey spoke openly about the added pressure associated with such an advanced and sophisticated position.

“I think if you’re in that sort of position you need to be sliding little balls through, playing the ball wide for an early cross and getting on the end of things that come into the box.

“In that respect there is a bit of pressure on creating opportunities and scoring goals, but I think I’ve had a few assists this season and I’ve got my first goal this season so hopefully that will be the start of many to come.”

At only 20-years-old Ramsey is still a youthful presence in the dressing-room, however, with even less experienced midfielders Francis Coquelin and Emmanuel Frimpong also pushing for regular starting berths the captain of Wales admits competition is fierce.

“They’ve done well and they’re very eager to play and are always training very hard. There has been a bit of competition in there and when everyone is working hard it helps people stay on their toes I think.  It’s nice to have that kind of competition.

“We’re a very young midfield and we’re only going to get better with more games and more experience. I think this midfield will be around for a while and hopefully we’ll continue to get better and better and dominate games.”

Analysing the obviously drastic change in personnel since last season, Ramsey concluded that there is still room for positivity and a great deal of quality for his coach to call upon.

“Obviously there have been a few players who have left the club and a few that have come in. Overall I still think we have great quality in there and are very dangerous going forward. What the team needs now is a few wins on the bounce and then you’ll see our true qualities and we’ll be much more of a threat.”

Three more years. I guess that makes sense, would make it a nice round decade without winning fuck all.

and thats why james should sit with the spurs fans and get blown by roman abramovic the negativity among arsenal fans are so 2010…come on you reds! I happen to support the team all the way trough and i believe we will win a trophy this year, Not the league but something else. Just give the team a month or two but when it starts to work we will come back very strong. The verminator is coming back, Gervinho will start scoring more and maybe even the little russian will spark a bit. Just give it a few games. we… Read more »

Can’t really argue with the title of the post. I know everyone wants everything yesterday, its the essence of being a supporter and I must confess I get in the doldrums a little when I see the relative strengths of our midfield and some other teams (I won’t credit them by naming them) but I’ll stick my hard hat on and support them, as they wear the shirt, and whatever you might think, when they wear it, they are deserving of support;no point cutting your nose off to spite your face, booing and histrionics is not going to inspire them,… Read more »

I do have the patience for Young Guns Mk II, albeit with a few reinforcements and maybe getting them before the final day of the transfer window next time could help. I see our alternative of spending the sums other teams our as unreasonable and someone is going to get bored or crumble soon, they can’t all buy success. The current state of the finances in football is ridiculous and I would prefer us to avoid getting sucked into it and pray it’s the right decison in the long term. ps It would also be nice to not sell a… Read more »

I’ll concur with that mate, we do need reinforcements to strengthen the spine of the squad and I wouldn’t by any means support any motion to sweep clean the youth talent we have in the team ( and it is talent, just raw and for some unpolished). It is as we all know a results business, and despite our teams relative ‘achievements’ in keeping on the shirt-tails of the bankrolled/sugar daddy squads in the past few seasons, few people see past titles and trophies… which is why I asked will they be given the time, because without some kind of… Read more »

Well said padwoir but few people on here give the time I day to those that don’t understand it and worse just slag of those that have a reasoned argument that this lull in our form could have been foreseen and prevented, with maybe more investment in a better calibre of player. Attendances may not have fallen, 4th place may have been a reality instead of a hope etc etc. if we do not get 4th then the board have the perfect excuse to not invest again, and the top players won’t come anyway and how no one can see… Read more »

I understand where you are coming from. But look at Liverpool! Liverpool had a crap start last year. I think they are looking much better this year and for me, they have gotten a few star players that they brought in. Like Suarez. And they didnt finish top 4? I dont think its necessary to finish top 4 to keep or buy players. Money is necesarry. THe real problem is that competition is harder right now, with Man city having bought a dream-team in some wet fantasy football dream. They will finish top 4 meaning, one less spot for chelsea,… Read more »

Did anyone else see Nasri’s clueless performance last night? 25 million for that? Ha! Fuck you very much Citeh. Glad we’re not paying his prossie wages.

Fucking love Rambo.. Looking forward to him scoring the winner against the orcs!

Certainly put his money where his mouth was tonight didn’t he, kudos Rambo lad kudos.

Marseille 0-1 Arsenal players ratings, what we can take from this. | Being Arsenal FC Bystander

[…] believes that this young midfield can only get better, especially when Jack returns. Based on yesterday’s performance, I would say yes. Some choose […]