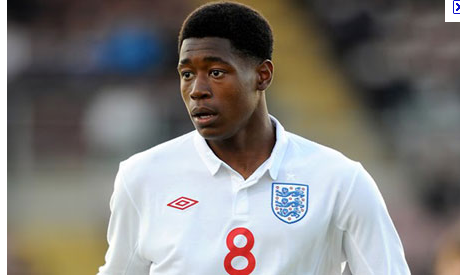 Luke Freeman and Chuks Aneke know eachother well enough, having featured regularly for Arsenal together, first for the under-18s and then at Reserve level, for much of the past three seasons.

Their understanding of their respective games is likely to be put to good use over the coming months, with both players having recently joined League One side Stevenage on short-term loans with a view to an extension.

This is Aneke’s first time out on loan but for Freeman, who made his Stevenage debut playing 85 minutes last weekend, it will be an important challenge, with the 19 year old having seen his previous stint away from the club, at Yeovil last season, curtailed by injury despite a promising start.

Freeman will be hoping that the presence of Aneke will bring the best out of him and the pair have been in scintillating form at Reserve level so far this campaign with six games between them. It is not the first time that Arsenal have loaned out more than one player to the same club at the same time, with Nicklas Bendtner, Sebastian Larsson and Fabrice Muamba all thriving during Birmingham’s promotion-winning season of 2006/07, although the latter pair subsequently joined the Blues on a permanent basis.

There is little chance of Freeman and Aneke leaving the club for good at this stage, however. Aneke has certainly caught the eye of Arsene Wenger since his emergence to the second-string and made his first-team debut with the briefest of cameo appearances in the Carling Cup victory over Shrewsbury in September.

Freeman’s career has taken a somewhat different path. Having been recognised as the youngest ever player to feature in the FA Cup, a record he still holds, whilst with his previous club Gillingham, he has since struggled to command much first-team attention since his move to North London, save for a couple of training sessions with Arsene Wenger’s squad this season, and has frequently been deployed on the left-wing despite preferring to play as a striker.

Freeman, a keen learner with an enthusiastic attitude, will be hopeful that a sustained spell at Stevenage will help to propel him into Wenger’s longer-term plans, although, at the moment he would be advised just to focus on what is directly facing him and worry about the bigger picture at a later date.

They won’t have to travel to far to get there, but, certainly compared to the lavish facilities on offer at London Colney, Stevenage is likely to feel a world away from home for Aneke and Freeman as they enter the rough and tumble of League One.

Having eachother for company, however, may just help to make it a smoother ride.

I just have a feeling Freeman will be another one who will be released in a year or two. I would love all our young gun academy boys to come through but its just not possible.

Yeah it is a shame but thats the reality of it I suppose, hard work and application won’t exactly seal the deal for them, but it will go a long way to helping or vice versa. JET is an example of that, bags of talent let down by a below par Arsenal standard work rate. A lot of the time it comes down to patience on the youngsters behalf too, I do wonder sometimes how many have moved on citing the the need to play first team football that very well might have made that break through due to injuries… Read more »

Yep these lads in our reserves have the comfort of knowing that as long as they work hard they will make it at usually a pretty high level and still make a bloody good living doing what most others would love to!

Nicely said, the other thing Freeman has against him is the fact he’ll be up against Joel Campbell. Unless he’s spectacular I’m afraid the lad will be overshadowed. Regardless, I wish the very best to both the lads and I hope their time at Stevenage pays off.