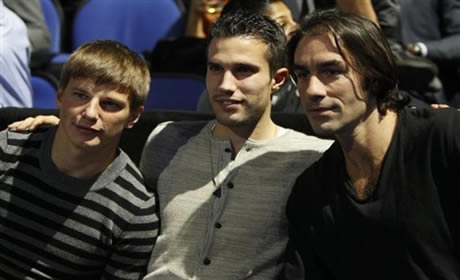 Arsenal’s dreamiest ever player, Robert Pires, believes Arsene Wenger will remain as Arsenal manager for the foreseeable future. Although doubts surfaced after an interview with L’Equipe last weekend these were quickly put to bed when the full transcript put the manager’s words into context.

And Pires, pictured above at a tennis event in London with Robin van Persie and a small plump child*, can’t see Wenger leaving any time soon.

“I read the interview but I don’t think he will be leaving for a long time,” he said. “Arsenal needs Arsene Wenger, but also Arsene Wenger needs Arsenal. For me, he will die at Arsenal.

“He is like Sir Alex Ferguson at Manchester United. After you think about Ferguson and United, you then think about Wenger and Arsenal.”

And with Thierry Henry training with the club until February there have been suggestions he could re-sign for the club on a short-term basis to provide cover for van Persie. However, this doesn’t seem likely to the shuffling handsome genius.

“Do I think it’s possible for Thierry to go back to play? No, I don’t think so. It’s not in Wenger’s philosophy to go back and sign former players when they are older.

“Okay, he did it with Jens and Sol but for me it’s not the same situation.”

If I were a dog my lipstick would be out!

Did that handsome pair adopt the chubby child?

I didn’t notice it the first time but *ROFL*

Its 2 and a half men all over again!

These guys would actually be perfect for the opening credits! Little Andrei would be hilarious!

He might not be able to run his little legs all the time but he knows how to keep some damn fine company.

I think we can be thankful your Ian Allinsons lipwig then.

You should put pictures up on the iPhone/iPod touch because I always miss out.

Man, look at the charisma in those cheek bones, that man could be anything cultured. Thank christ he chose dreamy arsenal winger.

no fucking logical response to this please, i’d pay that man 100k per week to park his arsene on the subs bench week-in-week-out just help me sleep better at night..