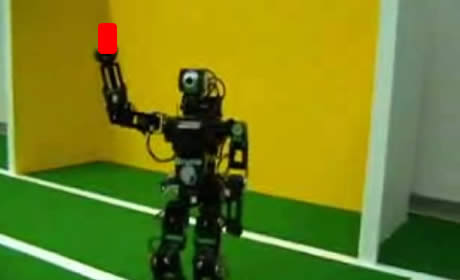 The introduction of technology in football is an issue which divides opinion. There are those who believe that not using goalline technology, for example, is, in this day and age, pretty damn stupid – especially as it would be relatively easy to implement.

There are others who think that decisions should be made by the referee and taking that away from him would undermine the game and the authoritaah of the officials. Then there are questions as to where should the input of technology stop? Offsides? Fouls in the build up to goals? And how much influence should a video ref have?

All questions worthy of debate – and that’s not even taking into account how video technology could, and should, be used post game to help cut out foul play, cheating, diving etc – but Arsene Wenger believes the introduction of technology into football can’t come soon enough.

Speaking to Arsenal Player the boss said, “The sooner, the better for me. The sooner they go further, the better. I have always been a big fan of it and given it every support. There are no [doubts for me]. The concern of course is that the technology can make mistakes but still statistically we will improve a lot.

“Overall we all have memories of when this technology would stop an injustice, so let’s go for it – as quickly as possible.”

Yet football, and those at the top, remain pretty much opposed to taking the human element out of the game and as long as the game is run by men who think racism should be tackled with a handshake then the chances of introducing technology at any level seem distant.

At the very least there ought now to be some kind of debate to find acceptable guidelines – e.g – what technology should be used, when it should be used and once a consensus is found then it would be much easier to try and introduce it to football.

As long as the waters are still muddied – and they are – then Arsene, along with the rest of us, is going to have to wait even longer.

I think goal line technology should be introduced and a tennis like system where each team gets two appeals for other calls such as offsides, penalties, etc losing an appeal is the ref is correct. This will mean that not every decision is reviewed and will also cut the amount of cheating as it will be pointless.

I dont think they should use the tennis system, they should just have the technology to investigate any decision that is not clear cut. I would much rather them introduce refries more like rugby. You can hear exactly what is going on and there is no time wasted because they simply pause the clock. Imo that system makes the most sense. To pause the clock and have another official watching a replay to make a decision. It works very well in rugby and you have better relationships with the refs all around because of it.

I read this from some credible enough source somewhere. Too lazy to go fetch it.

Well if FIFA lets that happen how will the likes of Barca ,Real,Manu get past ARSENAL

I believe when it comes to the business end of the season at least it is worthwhile to all teams and players alike for the introduction of not just goal line technology, but technology whereby referees can make important decisions with absolute confidence. How often we have seen teams went on to win major championships, only to be shown seconds later the result was due to human error.

In this 21st Century referees should not still be winning games. But teams that have trained hard ‘n’ battled fairly. Time for a change……

Spider Webb made the decision to send off Gerrard against Manu in Dalglish first game by looking at the screen wat tat took like 2 seconds?
Try bringing in the technology or in the rules for cunts like Barton to get suspended.
Look at F1 they keep changing the rules everytime at least they are experimenting. But its hopeless to try nd put sense in minds of cunts like platini and Bladder they are only here eradicate CORRUPTION.

For me it’s staggering they haven’t introduced post-game video punishment.

This rule about a ref seeing something is ludicrous. If video evidence shows a player has made a bad challenge, dived or cheated in any other way they should be retrospectively punished.

That’s got to be a starting point

Truly, but thats really obvious, and the powers that be don’t do obvious. Also part of FIFA/UEFA’s stupid idea to add yet another official behind each goal in some competitions has been their Childs sticky plaster attempt to keep that kind of technology in abeyance, I’m afraid the old dinosaurs havn’t quite grasped that rather than have all these extra Men in Black (que music).. they could have on video ref, with a radio link to the ref. Him shouting down the earpeice of the referee ”Stop play, some cheating toe rag has just clotheslined the goalie” would take as… Read more »

one* not on. But I’m guessing you clever lot figured that out anyway.

Yeah in a perfect world Dave, but we’ve moved on from there I’m afraid. With nearly all matches now under intense media and public scrutiny on the big screen and the almost instant ability for everyman and his dog to see whether it was a goal or not or if some serious foul play has gone on off the ball or not its a bit a ridiculous for the one man that counts not to have that same input. The whole jury by millions thing does make the game a bit more sterile I have to say, but thats where… Read more »

Random thought:
If a fan in the stadium was truly smart, can’t he try tuning into the same frequency as the referees walkie talkie system thing and just annoy them for the whole match?

I agree with blogs about post match punishments regardless of what the ref thought he saw or not. I find it just plain wierd that a player can break a leg or ruin a career but because he only got a yellow he is off the hook. I think that the only tech we should use in game is goal line. Finally, as I’ve heard from some fans, we shouldn’t be relying on pausing the game to watch a quick replay of the TV cameras to make a judgment, that is simply not accurate enough.

been used successfully for a some time in rugby league and rugby for sometime now. In cases where the decision is not clear cut / camera didn’t see it goes back to the ref to make a call. Decisions are now waaaaaaaaaaaaay more accurate when it is used.

Which I think you’ll see is clearly more meaningful.

Right we’re looking like a pair of proper geekwads now mate…but – as a hexidecimal conversion you can make the last 3 sets read CFC. So is this some message about Chelsea ? Unfortunately I can’t really make out any kind of meaningful message out of the rest.

There is so much money in football it is surprising that there doesn’t seem to be anyone building some sort of refereeing AI that does away with the need for any human decision making whatsoever. All the human ref would need to do is blow the whistle when the software tells him to. Not impossible with today’s technology surely?

If someone did develop something like this that worked they would make a boatload.

Goal line and post match punishment (particularly bad challenges / cheating) for me, anything more would have ridiculous implications with enforcement. Even then there would be massive scrutiny on the parties making decisions post match and issues such as calibration of equipment etc…

What is there to lose in having closure that your team’s shot actually didn’t cross the line? Wouldn’t it take less time to confirm if it is a handball in the box than it takes for a certain cunt to wipe the ball for a throw?
In this time and age where a referee’s decision is scrutinized by millions and may cost Ivan Gazidis a few millions, we surely need a foolproof decision. Even “Bladder” might get a kickback from that contract.

“Even “Bladder” might get a kickback from that contract.”

Bet he is working on it…

There is too much money in football now, to be reliant on one human being.