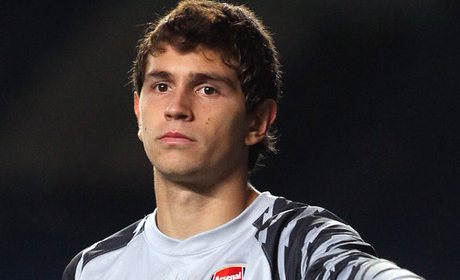 Following the loss of form and, subsequently, the departure of Jens Lehmann during his maiden spell at the club, the Arsenal goalkeeping position became something of a hot topic, with neither Manuel Almunia or Lukasz Fabianski appearing viable candidates to assume the role of first choice in the direct aftermath of his departure.

Wojciech Szczesny eventually provided the answer to that conundrum, with the Polish shot-stopper, who joined the club as a 16 year old following a successful trial in 2006, having to patiently bide his time before, off the back of a hugely-fruitful loan spell at Brentford during the 2009/10 season, he established himself as Arsenal’s number one goalkeeper last campaign and has subsequently made over 40 appearances for the club at senior level.

Prior to his breakthrough, there were growing fears that Szczesny would leave the club owing to a lack of opportunities, but an injury sustained by Fabianski during the warm-up before a game against Manchester City in January presented his compatriot with a chance and it is one that, the odd mistake aside, he has taken with aplomb.

Now, another situation arises in that the club currently possess two highly-promising young goalkeepers in Damian Martinez and Reice Charles-Cook but, given Szczesny’s presence, it appears as if it will be, at this stage at least, difficult for them to make the breakthrough in the long term.

Martinez has made a substantial impression since his move to the club was confirmed early last season. The imposing Argentinian impressed during both FA Youth Cup fixtures last season and has turned out several times for Neil Banfield’s Reserve team this time around. Martinez was rewarded for his progress with a place on the bench for the Carling Cup victory over Shrewsbury in September and is likely to go out on loan later this campaign to bolster his experience of the English game.

Charles-Cook, meanwhile, is only a second-year scholar and is yet to sign his first professional contract at the club, but his reflexes and command of his penalty area have drawn rave reviews. He was particularly impressive for the Reserves during pre-season, and again for the under-18s against Chelsea at Emirates Stadium recently, and will keep goal in the Youth Cup this term.

In terms of their accession to the top, Szczesny is not their only obstacle, but the others certainly appear more passable. Speculation has already begun to generate about whether Fabianski, for all the promise he displayed in the first half of last season, may have to leave in January for regular football, whilst Vito Mannone, despite his stint in the first-team a couple of seasons ago, when he played eight games without defeat, still possesses a tendency for punching the ball in dangerous situations and making avoidable errors.

Manuel Almunia, back from West Ham, will leave when his contract expires at the end of the season, whilst young James Shea has not received much game time during his loan spell at Dagenham & Redbridge. Sean McDermott, the Irish youth international, has improved following his shaky start to life in England, but Charles-Cook, despite being the younger of the two, appears the better prospect.

It may require a touch of fortune, such as the one that benefitted Szczesny, if either Martinez or Charles-Cook are to succeed at the club in the long term, but, such is their rate of progression that it could be the case that, in a few years, Arsenal could have gone from having no outstanding candidates for the number one shirt, to having three.

Hope this is the case. Really like Martinez he looks a quality keeper. Have to agree about Mannone though, apart from the Fulham game I always saw him as a bit of a liability.

Big fan of Don Vito!
Had an excellent game against Fulham and I’ve loved him ever since!
Would be an ideal back up to Szcz if Fabianski decides to leave!

Woj is our main man, Fabianski, well…he is good but not that good. i can see him laeving. Manone has been shaky in the games ive seen, but on the other hand, just the progress that fabianski made, was massive. I used to think he was insanely bad, but after a while he became a class keeper.

The progress by Woj is amazing…but goalkeepers need class competition and Woj can be the role model for the younger generations.

Apart from the one’s we want to stay, does anyone know how many contracts are comming to a close?

We can offer RVP Almunia and maybe some of Denilson’s money on top of what he earns now? Although, don’t know how much sense that’ll make long term.

i like mannone as a keeper. fabianski as a kicker.but SZCZ is obviously prefferred because of his height which gives a whole new dimension.one thing i like about vito and SZCZ is they are confident even when we are losing.i have seen fabianski put his head down many times after conceding….while ppl like SZCZ kick the ball furiously and let all the anger go immediatley after conceding and get on with the game later.. this season we have a defence with character….im just loving andres santos and his brazilian influence in our team…TV5 and KOS never back down attitude and… Read more »

Agree that VARGAS is a good player but his attitude is disruptive. I would like us to continue with our pursuit of GOURCUFF though. We should’ve signed him before Milan did but he’d still make a great addition no question.

If we don’t get him then MONTOLIVO will also add something to the squad. And in terms of flair players KRASIC would be good even though he is having a tough time at the moment. TORJE is also worthwhile and a realistic signing.

So how are your Football Manager games going guys?

Heh… It’s not football manager. I’m a very close follower of Serie a and I like to pretend I know what I’m talking about….

Its good to see that Serie A still has fans. I do like the Italian league. It fell in 2008-2010 but now it is coming back. It is starting to bring in talent. Now the only thing missing there is actual Italian young talent.

Fair enough. For what it’s worth, in the Udinese games I’ve seen this season Torje has looked talented but still very raw. I think he needs a season or two in Italy first.

Wenger was going to get Gourcuff this summer but after he heard about his injury problems, he decided not to.

The Don
Reply to  Kas

Why are all the NAMES in capital letters

Am liking scezny , he has impressed me with his ability and response on the Pitch.i feel if he can improve more and get even better before he gets to 21 yrs. I hope he can emulate iker casillas of real madrid. Made his appearance in the champions league in place of injured caesar. VS leverkusen champions league final if am not mistaken.Since then casillas has never looked back. like they say in spain ” un senor.” Finally it is up to scezny to show that he wants it more cos to be No 1 is not easy,it comes with… Read more »

You need a mixture. If the young keepers don’t want to sit behind Szczesny for the next ten years, sell them and bring in a 30’s goalie or keep Almunia on the bench. Buy another 16 year old and let him mature. We should not have 5 keepers under 23 in the squad. That said, I hear Martinez is going to be good. Keep him until he is ready and then sell him for a huge profit to a big club.

I agree with the point that it’s a good idea to keep a an experienced back up. But sell Martinez for a huge profit? Surely we should keep our talent to help the club progress further up the table. Are you silent Stan in disguise or just another troll?

We can only play one keeper at a time. I think TexasGooner is assuming Szczesny will be our no.1 for some time to come.

or maybe martinez turn even better than scezny and we sell the polish for big money,little to early to say but i ve watched the argentinian gk play and look like a great prospect

Who cares if Martinez could be better. Chesney is and always will be number 1 because not only is he good enough for Arsenal but the way he handles off the field matters is world class and way ahead of keepers his age (De Gay)

But then we should surely have goalkeepers to challenge for the #1 spot to keep them all improving. Cech is the obvious example of a ‘keeper with no competition as he is starting to struggle (fitness, confidence, etc….) but Turnbull hasn’t really shone and i don’t even know if Hilario is still there so he keeps his place. Look at Gnomes. Starting to look better but other keepers have been better in training and subsequently taken his place. (just to say that i hate Chelsea and Spurs but they are good for examples) Most teams have at least 3 GK’s… Read more »

the reality is that if those two become the players we are anticipating, then we will be unable to hold on to them all beyond 5 yrs. No keeper that good would stay as back-up for 10 yrs or more of his career.
Well, 5 yrs is quite a long time for us to be bothered now. The situation will be better dealt with then. For now, let’s enjoy this positive atmosphere.

So much of goalkeeping is about confidence. The biggest difference between Szczesny and Fabianski is that when Szcz makes a mistake, he becomes more determined to do it right next time but when Fab makes a mistake he lets it eat away at him. At least that’s how it looks from the outside. And Szcz’s confidence is infectious among the fans and the whole team – what other goalkeeper, anywhere in the world, has let in 8 in a game and won a player of the month award the same month? That’s bouncebackability! Martinez and Charles-Cook appear outstanding prospects. Here’s… Read more »

Goalkeeping is almost a unique position in that it’s a place in the team which is almost never rotated, so either you’re first choice and playing every game or you’re not.

If these guys continue as we hope and become high class keepers then they’ll be competing first of all with each other, then with Szczesney. It’ll be a very nice problem to have, but I don’t think it’ll be an issue for 4/5 years.

[…] Mannone’s departure would mean Manuel Almunia moves closer to first action unless Wenger takes the opportunity to promote one of the young keepers at the club – with Argentine Damian Martinez the most likely option. […]

these guys are soo young. goalie’s aren’t supposed to be that good when they are so young so we should keep loaning them out until they are 23-24 years old.

THEN we can see if they are good enough to join arsenal’s first team or not.