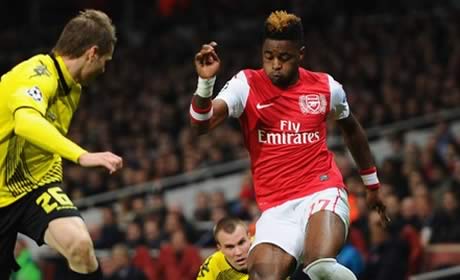 Alex Song revealed that before last night’s game with Borussia Dortmund, he told Andre Santos he’d score or get an assist, but the Brazilian full back was having none of it.

Song set up Arsenal’s first goal with a marvellous dribble down the left hand side and a cross which the Dutch striker finished with aplomb.

Song said, “Before the game, I said to André : “Tonight I will score or I will give an assist,” and he said: “No chance!” It was that sort of challenge you give each other before a game.

“I had the opportunity, when I saw the space, and I just wanted to take it. I did well and crossed the ball to Robin and he finished well. I’m very happy. Robin is a fantastic player and when he has the opportunity to score, he scores every time. In my job, I just try to give him the ball every time.”

And the Cameroon midfielder spoke of his happiness at finishing top of the group, especially as failure to do so last season resulted in a very difficult first knock-out round draw.

“Last season we dropped some points and we had a hard game against Barcelona – it’s always very good to finish top because when you’re second you pick up the big teams.”

more betting between players then please.
Mertesacker: “I bet I’ll score a hattrick”
Santos: “Fuck off, no you won’t”
Commentator “MERTESAAACKERRR! Unbelievable! He’s got three!”

just had a daydream of Mertesacker sealing the league for us against Everton Tony Adams style… that would be amazing.

Read somewhere on Goal.com where Song told RvP he was going to have an assist and he was told he had no chance. He said he was going to confront RvP after that interview. Love the fact that the players are pushing and daring one another; that’s making them a mighty strong force. P.s: i can put my money on Song having bets with everyone- even the Prof.- he would have an assist. Lovely!

Given the same four chances, the little Russian would have scored the four to be honest.
But, would he had been in those positions? Dunno. Don’t forget Gerv has excellent positioning.

Oh no! Appeared in a wrong place. My apologies.

judging by Santos’s ‘no chance’ claim, i guess Song would have lost a lot of bets prior to this.. haha

I’ve got to learn to stop panicking about Song’s maurauding now the team can cover it.

Me: AAAAGGGGHHHH WHAT ARE YOU DOING THEY MIGHT BRAKE… oh… what a legend.

is that Gunnersaurus kicking an unnamed keeper in the nutsack?!
the things Eboue used to make him do!

If thats the case I want a hotline through to Song prior to every match, I’m sure I can come up with some outlandish bets for him to live up to.

Sun 18 Dec:” Incredible stuff here at the Etihad, Nasri has been debolloxed by the ball bouncing off Alex Songs earlobe and flown past Hart for an own-goal ! ”

hahahahaha! what a vivid imagination! padwoir i fucking love your comments!

I guess somebody doesn’t lol. Thanks btw 🙂

how do you know andre/y he meant?

The quotes came from his post-game interview and UEFA reported them as being about Santos.

Ah, thanks for deciphering my drunken scrawl.

Andre: “Alex, I dare you to walk under this giant magnet while wearing your paper – clip / safety – pin hat”…..

No mention of the vast amounts of thigh he was showing last night?! Lets hope he wears his one-legged shorts at every game from now on

Yeah, that was wierd. One leg of his shorts rode up after a challenge, I expect, in the first half before his goal, and even went unadjusted at halftime – continuing on like that for the rest of the match. Guess it shows how focused he was on the game.

“I just try to give him the ball every time.” – he did it against norwich for our 2nd where he had the choice between gervinho, who was in a better position but would have bottled it again and van persie for whom it was difficult to score but nevertheless he did. if you have an in-form-goalscorer he’ll always be the one you’re looking for with your pass. but it makes us even more dependent on RvP and despite his class we’re easier to defend against if we focus too much on him. it’s time for gervinho to score some… Read more »

What if it was Arshavin?

Given the same four chances, the little
Russian would have scored the four to
be honest.
But, would he had been in those
positions? Dunno. Don’t forget Gerv
has excellent positioning.

I think it was Arshavin more than Santos. Andrey Arshavin is the sort of players who would make such jokes.

If Messi keeps his dead down and works hard, he could be the next Alex Song.

P.S.
*wraps hands* next week, the Carling Cup player AKA Le Cunt, will come down with Man C to play against us. Please lets not forgot to give him a warm welcome 😀 😀 😀 .

It makes more sense it was Santos as he was playing

1: Arshavin’s first name is spelled Andrey (or Andrei) so I’d go with Santos as the straight man in Song’s riff

2: I am flabbergasted that UEFA haven’t opened an immediate probe into player betting and match fixing at Arsenal, banned us from European competition for eternity and thrown the manager into the burning flames of Hades for good measure.

Padwoir
Reply to  the only sam is nelson

That would be a new low wouldn’t it. A UEFA charge for two players of the same side inspiring each other to greater efforts through the art of conversation. How bloody dare we !
I can see Michel Platini hunched over his desk now like the twisted poisonous Dwarf he is trying to find a way to make it stick, I really wouldn’t put it past him based on his record to date.

and with a game to spare

put that in your pipe and smoke it, naysayers!

Was definitely talking about arshavin!

He said ‘andrey’ wouldn’t have the chance tonight as he wasn’t playing so they made the bet. Ah well, not that it matters..