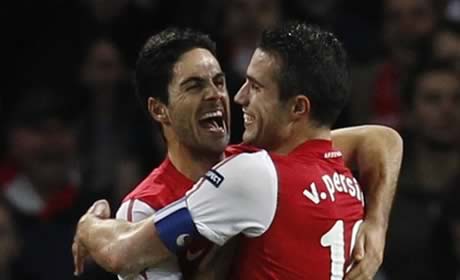 The Spaniard was especially pleased at being able to go to Greece next month without any pressure. “It’s fantastic for us, with one game to go”, he said. “We didn’t want to go needing to win over there because we knew it was going to be really tough. We knew how it important it was tonight against a really tough side, who put you in trouble and press you really, really hard – and we’ve done the business.”

And his joy wasn’t confined simply to last night’s result. Having come into an Arsenal team going through its most difficult period under Arsene Wenger, he’s enjoying the fact the team have turned things around so well.

“We are really happy”, he said. “I think we are improving every game. If you talk about two months ago and the situation at the moment, we’re much improved. We’re playing with more confidence and we’re more solid, we keep scoring goals and hopefully we can keep on a good run.”

And the improvement is something Arsene Wenger noted in his post-game comments. The Gunners had a tough group and the manager was pleased his team came through the test and became the first English team to qualify for the knock-out stages.

“We were in a difficult group and I am very happy and pleased if you see where we came from. We drew Udinese in the qualifier and you could not bet that we could go like we did. Overall I am very happy because we came out from a very difficult period because we were focused, worked hard and were.

“Manchester United could have qualified last night and of course everybody expected Man City to qualify but we are the first team. It’s difficult at this level against anybody – you never win an easy game in the Champions League. I have played 150 games as a manager in the Champions League and every single game gives you a different problem.”

Arsenal now regroup to face Fulham in the Premier League this weekend.

According to AVB, it’s difficult for English teams in the CL right now.

didn’t demento do a dummy spit in his press conf when asked something about how it was ironic that the manchester clubs were doing so well in the league and yet struggling in europe? walked out, didn’t he?

what a fucking tool

I’d say that Mikel Arteta has played a very big part in those improvements. He’s not the most spectacular player, but his ability to keep the ball and do something useful with it in tight spaces, and his overall work rate are very very impressive. And although of course i don’t know him personally, he comes across as very humble and determined.

It was put really well on the Tuesday Club, the instinct is to go, oh he’s not as good as Cesc but they just arn’t comparable. Looking at it properly he is just miles and miles better than Denilson.

An we have Jack and Rambo, and Jack’s a player who has the potential to be another Arsenal superstar.

Here here. I’d say he’s definitely been instrumental in our turn around. A wonderful player with a wonderful character. Other footballers could learn a lot from him.

This is a completely different team from last season. I doubt we’d have scored either of those goals. I don’t know why we persisted for so long when everyone knew things were not working. But this shows how great Wenger is – from apparent disaster, with a few ‘panic’ signings, grabbing what he could as the supermarket doors were being locked, he’s turned the team back into something like it used to be 6 or 7 years ago. Genius.

the only sam is nelson
Reply to  Cuntex

Yes I am Immature.

Interesting little period coming up now for this side. Target one has been achieved by qualifying from the group (top is a Brucie Bonus), so tick in that box. We’re now also back to respectability in the league, only 3pts off 4th. The point is, they had no choice but to get their nuts down and work their bollocks off in every game to do it, so it’s important they carry on with that attitude and don’t slip back into Charlie Bigspuds mode, like some of our sides have done in recent years. You do get a good feeling about… Read more »

On another note Ramsey is just getting better and better. Potential to pass Cesc? I think so.

What strikes me so much about Arteta is his willingness to sacrifice the flair we knew him for, with Everton, to the good of this team. His intelligence ha benefitted every single player in this team: he knows when to go to the left and cover for Santos, knowss when not to cross the halfway line when Song is marauding, knows how to start our counters, shoot, pass and even strike. A genius of a buy. Reminds me of Makalele of the Madrid era: amazingly efficient but not missed until he is not around.

That’s what happens when a player actually feels grateful to be playing for Arsenal – they play for the team. maybe we should send all our young players to Everton for about 6 years…

Ramsey has given yesterday some potential assists, only for his teammates to disappoint him (Walcott and Gervinho 1on1). I hope he continues his development and indeed passes Cesc.

I was too hasty in losing faith in Arsene. Pardonnez-moi, Monsieur le Boss.

I like Arteta a lot.
Humble, classy, solid performer. Calm under pressure, doesn’t switch off and doesn’t make silly mistakes.
I think it’s those owl eyes he has. He can see a pin drop from a mile away.
Seems to be rubbing off well on Ramsey too, whose work rate has improved massively. That’s probably due to getting back to fitness too, but anyway…
All those Everton fans saying he’s lost it were clearly wrong (and bitter). He’s adapted his game, and he’s staying fit *touches wood*.

My oh my, how goodlooking he is.

And I am straight.

What Thorough rightly says above about Arteta, ie “amazingly efficient but not missed until he is not around” can be equally well said about the manager if not more so.

I agree with all the comments about arteta. The other midfielders know someone has their back and therefore play with confidence. I call it the “Vermelean effect”. The opposite of this is the “denilson effect” which produces a state of panic and fear in everyone within 1 mile radius.

From our recent history, I reckon “Gilberto effect” would be more accurate. Having him playing was like having a moveable chainlink fence, always positioned just in front of the back four.
The Brazilians didn’t call him “The invisible wall” for no reason…..

agree with much of the above, the combination of curbing back the flair element to concentrate on basics along with the re-awakening of the idea that it’s *ok* to put yer foot through the ball and smash it into row z when doing this thing called “defending” seems to have really turned the season around. no small achievement and again, agree that making sure these basic tenets don’t get lost in some future game against the likes of wigan or wolves is key to keeping things going so well loved the fact that little yossi came on last night and… Read more »

You beat me to it.

Does Arteta remind anyone of a Spanish Tom Cruise?
Btw- his missus is Hmmmm tasty!

the only sam is nelson
Reply to  etteJ

I can’t be the only one with a “man crush” on Arteta?

No, Hampe does too, and Merlins Panini touches wood whilst talking about him apparently. Needless to say when Valentines rolls round I reckon Mikel will be getting a lot of Anonymous cards.

In the spirit of man love that’s going on on this post thought I’d share something with you guys
Was watching the game with my mate and arteta did some fkn bullshit turn himself out of an impossible situation to keep the ball.
My mate goes fuck me, didn’t know he had it in him!
I replied if he keeps going the way he’s going he’s going to have something else in him by the end of this season.. My dick
Haha
/end gayness

“Man crush” is generally more of an appreciation and respect of another male’s masculinity and character without any sexual attraction. It’s a subtle difference. Let’s just keep that in mind.