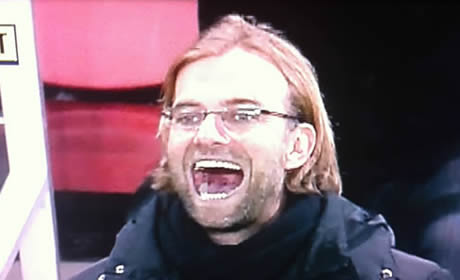 In all competitions, for club and country, Robin van Persie has already scored 22 goals this season, making him probably the most efficient and dangerous striker in the world right now.

His goalscoring exploits are remarkable and as usual Arsene Wenger was quick to respond to questions about the Dutchman’s quality, not just as a striker but as a captain.

Speaking at his post-game press conference, Wenger said, “At the moment I believe that Robin is an exceptional player. He takes advantage of our offensive style from the wings. We create a lot of chances but I don’t deny that at the moment he is the one who scores all the goals. We hope we can keep him fit and with us for a long time.

“He is completely focused on football and thinks day and night about the game. He is completely dedicated. It is not always obvious to put a striker as captain because he is in front of everybody. He was vice captain last year and was then captain while Fabregas was out.”

Yet even Dortmund coach, Jurgen Klopp (who made a point of embracing van Persie after the final whistle), was full of praise for the Arsenal goal machine.

“Robin van Persie, wow, what a performance, what a player. He’s certainly one of the best in Europe. I’ve hardly ever seen a player who plays so deep in midfield and then is such a danger in the box.”

With a busy schedule coming up Arsene Wenger now has to decide if he’ll take the opportunity to rest his skipper on Saturday. Although, with a Carling Cup game in midweek in which he is unlikely to take part, Fulham may have to face a player more lethal than a mega-scorpion stinging you on the top of your knob (apologies for the technical analogy).

If it makes any difference, “Van Persie, I hail you too”.

no apology neccessary, were just pleased to get the recognition we feel our work deserves.

Hey Arseblog, I hear that Ray Parlour, Robert Pires, Jens Lehmann and Thierry Henry were all in the dressing room after yesterdays match. Can you confirm this?

you think blogs knows anything? he just copy/pastes from the interwebs. i, however, took this photo: lockerz.com/s/158804616

(I didn’t actually take that photo)

blogs do know things…actually he knows quite a lot about arsenal. He is not a copy-paster thats nonsense…

some stuff he gets from the web, but he makes a nice journalistic effort actually..

Doesn’t matter where Blogs gets his 411 as long as its all under one roof for the Arses to read. Thanks for posting the photo though!

Nik, you want attention by any means possible!!!!

Oh well,, I guess we have to leave with some sad people 🙁 .

Someone needs to give this muppet some floaters so that he can venture out of the shallow end of the gene pool into deeper waters.

Damn, submitted before finishing, now I can’t remember what I was going to type……stupid bourbon!!

If he can stay fit (which I think he bloody well deserves, after all the shit he’s had happen to his various body parts) he could well break some records this season.

During the 2nd half, RVP seemed to be playing left-wing, with Gervinho up front. What was that about? Or was I imagining things?

Our wingers do like a bit of a swap, an our striker does like a bit of a meanacing drift. If you find them at weird points of the pitch, chances are they’re trying to do a goal or something.

Well, we don’t have the luxury to rest RVP in the premier league, so let him add a couple more goals to his tally and rest him for the Carling Cup.

I agree. The carling cup is a mickey mouse cup and always will be. Play RVP against Fulham. 2 goals up at Half time and then give him the rest he deserves. He is a tremendous player with an incredible amount of skill and vision. He is the best CF in the world right now. Robin, I salute you.

Says a lot about our turnaround that we believe we can hold a 2-0 halftime lead!

What has happened this season has just emphasised the need for us to URGENTLY buy a quality second striker. What would happen if Van Persie got seriously injured on Saturday? Answer: the end of our season. We are half the team without the great Dutchman. I know he’s an arsehole, but wouldn’t it be nice to have a second striker of the quality of say Adebayor? Somebody who we could bring in for the Fulham game to give RvP a rest and yet still have an excellent chance of winning the match? Let’s face it: Park and Chamakh are crap… Read more »

A bit early to write off Park methinks.

Who would you buy, Fatgooner? I can’t think of anyone out there that fits the usual Arsenal transfer target criteria.

Perhaps someone like Llorrente or Soldado – although they would both be excess of 20m.

We’ve got the money.

Lets buy Henry and spend 50 million on a youth serum.

Fatgooner You make sound as if there is a special separate bank account for the Transfers , that account only deals with players sales and purchases .You think that money is not used to do ANYTHING else but transfer ,there are other things that the club pays for ,wages,DEBTS,new medical center,agents fee etc etc. I read somewhere that Anelka’s transfer funds were used to make a new youth center and bought us Thierry Henry. I think the board ‘raises’ the funds to buy players , what makes other clubs better in the transfers is their financial ability to raise those… Read more »

The thing is , we don’t even need to buy a great striker. Just a ” good” striker. I mean, can we really not offload chamakh, kick in 8 to 10 million more pounds and let wenger pick a decent striker from France or Germany?

It just doesn’t seem like such a tuff problem. Truth is, we need a number two striker, chamakh sucks, park is………… Well who the fuck knows what park is. Bendtner is a cunt. I’m sure there’s a solution. Let’s sort this out in January please.

Don’t make me do the math again about the sales of cesc and nasri. We have the bloody money.

Plus , it appears fairly obvious that arshavin is on his way out in January and it appears Anzi machchchchachalachalac would pay a stupid fuckin amount for the Russian skipper. Plus whatever we get for chamakh, apparently there are some buyers (don’t ask me who or WHY).

Fuck a debt. If robin busts a nut, we’re fucked. Our season collapsing will be far worse than missing a few payments.

Come to think of it – I could see Wenger going for someone like Loic Remy. Talented with the ball, good with his back to goal, can play as a second striker, suited physically to the Premier League, and most of all, French.

anyone think we should sign soldado? he can be van persie’s number 2

We could sign any starting striker from any mid table club and we’d probably be ok. Is benjani still alive? I seem to remember him being a beast for pompey in the epl about 3 years ago ore citeh days. All were looking for here is a competent BACKUP!!!!

is it just me or does jurgen klopp seem like a excellent replacement for wenger, when he eventually retires? he seems to promote a very similar philosophy and has his team playing exciting attacking football with the added bonus of having the 2nd best defence in bundesligia history (last season). this is his first high profile job – one to watch over the next few years i reckon

yeah it’s either him or this bloke