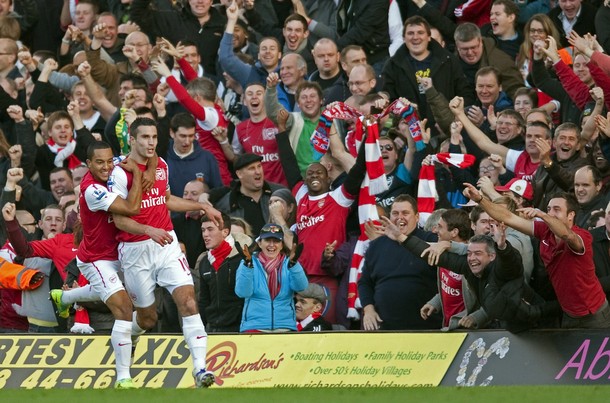 Theo Walcott admits he’s waiting for the day that he is paired in attack with Robin van Persie, but accepts that it would be wrong to experiment at the current time given the club’s solid form.

The England international has repeatedly spoken about his desire to play as a central striker, but despite being pencilled in as a possible heir to childhood hero Thierry Henry he has rarely been handed the responsibility.

Assisting Van Persie from his position on the wing, Walcott also spoke of his flourishing on pitch relationship with the Dutchman making clear that regular playing time has made all the difference.

“We’ve never really had a proper run together before now,” he told the Arsenal official matchday programme ahead of yesterday’s draw with Fulham.

“we’ve both been very unlucky with injuries. We’ve always had that chemistry in training and now we’re bringing it into the games. We seem to know where each other is and it comes naturally to us.

“One day I’d like to play up front with him, but at the moment I can’t see any reason to change a thing.”

“He’s just in the right places, but it’s his movement as well – if he didn’t have that, pulling off defenders like he did against Dortmund, he wouldn’t be scoring as many.

“Many strikers wouldn’t expect the ball to drop there – but it just comes naturally to Robin.

“I can put the ball into space and I know he’ll arrive, sometimes I don’t even have to look.

“It’s all about gambling, and Robin does that well – look at our first goal against Norwich, when Gervinho just missed the ball but Robin was there, on his toes, expecting the ball.”

“He’s an absolute dream to play with – there’s not one striker in the world better than him. And it’s not just the goals, it’s everything else he brings to the team.

“He likes to get other players involved and is a very good captain on top of that. When you’re enjoying your football as much as he is, everything seems to flow for you.”

It is incredible how often Walcott talks of wanting to play up front, but every time he is in a good finishing position he opts to pass.

Just like yesterday when he played in Ramsey – he should have taken the oppurtunity himself, if he wants to prove he merits a place up front.

I understand wanting to play in another position, and appreciates that he doesn’t bitch to much about like Diarra did. Yet he has to show his striker-qualities when playing, even though he is playing as a winger

But he thought Ramsey, being in the middle with the ‘keeper drawn to Walcott, was in a better position to score. Unselfish play made DB10 one of the most well loved players around so… shush.
A great striker needs a good all round game. Is Darren Bent an amazing striker or a good finisher? Could we carry someone like that in our team? Not at the moment, so it’s intellegent to look for the better way of getting a goal. If Ramsey had scored yesterday, we’d be lauding the pass and saying he’s brilliant again.

Yes, but it wasn’t even a good pass. It bounces a bit on the ground and it’s a pass of what 3-4 meters..

If you hit it hard in the long corner, the keeper will never reach it.

All I’m saying is If he wants to be a striker he needs to take the oppurtunities that come his way. At least to make Wenger aware of his credentials

agree. theo did everything right, schwarzer closed down the angle well and ramsey was arriving in the box unmarked and in a great position. passing was the better option than shooting. the pass was not bad and ramsey should have scored.

What’s on your mind? Team contribution or individual glory? Walcott seems to have preferred the former in that situation.

You just can’t pass judgement on someone from one difficult game. Speaking of finishing, who just scored that fucking amazing goal at Stamford Bridge weeks back (without John Terry slipping)? Oh right.

The primary reason that you got so many thumbs-down should be a direct reflection of your name rather than your comment! 😀

sorry, but I’ve got to advice a name change! 🙁

Clearly Theo operates in a self-awareness bubble. He just doesn’t have the close control and awareness to play as a central striker in our current formation. And as long as Mr Wenger doesn’t switch to a 442 and look to use him as a Michael Owen type – no need for close control as he will never be back to goal but will be running on to through balls- that’s highly unlikely to change.

Theo is a striker, look at Darren Bent, not a footballer, scores goals. Theo’s played on the right for us for 7 years(?) to hone his skills he is NOT a winger. He looks like he has no brain because he’s uncomfortable on the right. It’s only the last couple of seasons that he’s become more consistent out there. Put him on the shoulder of the last defender with RVP linking up the midfield we’re on to a winner. However this may be the reason i’m not Arsenal manager….. Yet.

Wenger is turning him into a ‘Henry’-type player, as he’s a player who started on the wing until he was 22-23. It’s about teaching him to make the runs to beat the man or get that final ball in. The guy is 21, lets give Wenger the benefit of the doubt as he’s trained more players than any of us.

Reminiscent of Overmarc-Bergkamp partnership…. Glorious days are on the horizon, keep up folks 🙂

Well for this to happen both of them will have to sign their contracts won’t they? Heh here’s hoping they do and a promising partnership flourishes

They should both sign up together so that they can play together FOREVER! I like the Theo RVP combo. It works so well and the longer they are able to link up together the better and more effective that partnership will be.

Just a quick comment on Wills post, I admit I was a little disappointed that there wasn’t a topic/post about Gary Speed.

I grew up watching him and I admired his skill and his attitude to the game in general. Its quite unbelievable that this has happened and you can only thinl of his family now who are left to deal with everything.

For me, Gary Speed set the standard for what a professional footballer should be. He was a top, top pro who always gave his best and was, on and off the pitch, a credit to the game. It’s no accident that he played over 500 Premier League games: because he looked after himself and avoided the usual nocturnal excesses that brought down others he was able to play on well into his thirties and maintain a very high standard of performance. And he was clearly a much-loved person; today’s tributes by his friends in football demonstrate just how adored he… Read more »

Well said, a true football legend always respected when he went back to his old clubs by their fans which says alot about the man, he seemed to have it all like many footballers but at the end of the day their only human like the fans, the mind is a fucked up thing RIP Gary speed

Depression is an illness and when it strikes it can be more dangerous and hostile than any form of cancer or virus. It takes no prisoners and can effect anyone at any time. It pays no regard to wealth, success, love or family. It’s a shame we lost another good man to this cruelty. RIP

I say we play the verminator as a spare striker! Unbelievable tekkers, and certainly looks more prolific then chamakh!

the only way theo could play up front would be switching to a 4-4-2. but that system just doesn’t fit our style of play and (most of) our squad. with the 4-3-3 we can build up pressure in midfield and send our full backs attacking and overlapping with the wingers. we have the attacking full backs, the fast central backs and versatile midfielders for this system. and i think theo is an excellent winger. his speed is a great advantage and he improved his crossing and passing a lot. if he wants to have a go on goal he should… Read more »

He could just make a 433 (usually 451 though) that often shifts to 442 when attacking. Walcott moves in, while a central midfielder drifts wide or the right back overlaps (meaning right-back would become exposed). Problem though is that our central midfielders don’t look very comfortable playing on the right (the only one, Samir Nasri, left for t3h C4$H). I agree though, Theo needs to learn how to cut in from the left if he wants to totally emulate classic Thierry Henry. Also, Gervinho is pretty able playing in the right wing, some say better than when he plays on… Read more »

Get him upfront and be done with it Arsene

not drag on the gary speed thing, but lets all not glorify him too much. ALTHOUGH this is totally presumptuous of me to say and I know nothing of background or problems. Suicide is never the answer and he did a horrible and selfish thing leaving behind two young children, wife, family and friends to pick up the peices and grieve over his selfish choice. No matter what your going through it’s horribly unfair and sometimes too easy to take your own life and leave behind your pain and grief onto those who don’t deserve it

But I want to play upfront RIGHT NOW!!

I would suggest we moved walcott into a deep striker role with rvp playing behind him, with gervinho in his preferred right wing position and eden hazard (unlikely I know) on the left wing, with a choice of wilshere, song, ramsey etc. for central midfield. Therefore not a 442 but a 433 with a deep lying attacking midfielder.

Cant see any sense in coming up with a formation that has players we dont have. We are talking about now; is that so difficult to comprehend?

Got to agree with you on that. Walcott should play off the shoulders of the last defender while RvP does his link up with midfield. With vP’s intelligence and skill and walcott’s pace and explosiveness, it will be the rebirth of DB10 and TH14. Another legendary partnership.