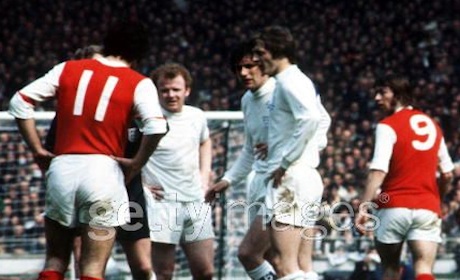 Arsenal have been drawn at home against Leeds United in the 3rd round of the FA Cup.

The Gunners have a great history with Leeds in the FA, some Anders Limpar inspired magic at Elland Road in the early 90s sticks out, and the two teams met at the same stage of last season’s competition.

A 1-1 draw at home meant a replay away which Arsenal won 3-1 with goals from Samir Nasri, Bacary Sagna and Robin van Persie.

In other third rounds news, the two Manchester clubs will meet at the Middle Eastlands with many hoping this is the first ever football match in which both teams kick each other to death.

You can see the full draw here.

the two Manchester clubs will meet at the Middle Eastlands with many hoping this is the first ever football match in which both teams kick each other to death.

I’d pay double to see that!

Nice suggestion about the two Scumchester clubs by the way

If you’d left out the unnecessary first part of your comment and instead simply said “see you in January”, then the thumbs would be the other way round….

Yeah, and I’d be less inclined to tell you to fuck off Paul

A nice home draw against a team in the division below (albeit doing well in that division). No complaints at all.

Really happy that the 2 Manchester clubs have drawn each other. Short of kicking each other to death, a hard-faught draw resulting in a replay would do us very nicely, thanks. I fear Man City will win fairly comfortably though.

Man… vs Man… again? I’m laughing my head of. I sure want to see Man’s inhumanity against Man, albeit Season 2.

Link comes up to commentaries of Everton vs Stoke though… Stoke 1-0 up.

But not bad eh, I just hope both Manchester clubs come up with draws until their legs fall off in the penalties.

And two hamsters gonna fight each other.

I wasn’t watching Arsenal for that Limpars goal but I still love these goals.
http://www.youtube.com/watch?v=0ksWrqkpfs0

Our draw is good but when you compare it with Sp*rs it’s still a little disappointing. Our shadow squad looks a lot hungrier this season so I think we should be able to avoid all those needless replays this year. Hopefully Arsene will take the Cup quite seriously this year as with that Manchester draw we’re really in with a chance!

It’s a bad draw for us. Leeds are good enough to beat our reserves if Wenger plays a second eleven. I wanted a crap team at home for the third round; now Wenger will have to play a few first-teamers to be sure of getting through.

Please no replay this time.

Our second team held off City’s pretty well. We just need to take the opposition seriously and I see us having a great chance winning it even with kids. Have a little confidence in them. They’re hungry too and well capable.

Na. We should be ok. No park or chamakh though please. Last I heard you have to get the ball into the net to win a match. So rvp and the kids and we should be ok.

I know the post above is going to get a few dislikes but he has got a point. as we saw last season they are no pushovers, last season we had to risk fabregas just to get a draw at home

Did you miss the man city match? 2nd team gave them a decent game. Looking forward to watch them terrorize Leeds.

Wenger can’t afford to gamble with Squilaci, Park and co here. This is the only trophy that we can realistically hope to win this season. It would have been nice if we got a side of no-hopers like Tamworth or Wrexham – then the first team could all have had a weekend off. But Leeds are not rubbish – we could be playing them in the Premier League next season. At least two or three first-teamers will have to play now.

At least you said 2/3 regulars I think that would be sensible. But stick with ox, frim and coq they deserve more games. Perhaps good opp to blood new quality back up striker we get in Jan sales

Boo fucking hoo, we have to play 2 or 3 first-team players. A hell of a lot better than either of the Manchester teams’ situation. Without those two Carling Cup semis to worry about in January, our schedule is not that hectic, so I imagine that this won’t be the end of the world.

Man U fans should look on the bright side, could have been worse, errrr something like Palace at home!!!!!.