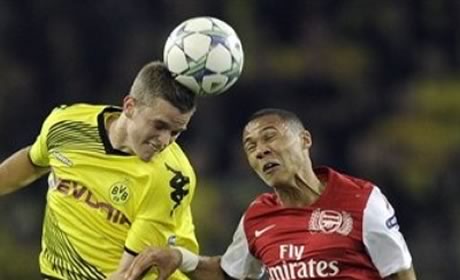 Arsene Wenger has admitted he’d hoped left back Kieran Gibbs would be back for tomorrow’s game against Aston Villa, but it’s little surprise to hear that the England international has suffered a complication in his rehab.

Gibbs hasn’t played since Arsenal’s 2-1 over Sunderland on October 16th during which he suffered a stomach muscle injury and the manager admits his absence is a blow.

“Kieran Gibbs has unfortunately had a setback and he is not back yet”, he told the official website. “It’s very disappointing because we had good hope that he would be back for tomorrow’s game, but he is not available.”

Wenger also confirmed that Johan Djourou could miss three weeks with a groin strain, and while there was some good news in that Bacary Sagna is now running after breaking his leg against Sp*rs, in the short term Arsenal have a something of an issue ahead of this busy Christmas schedule.

With Alex Song suspended, it would seem to us that Ignasi Miquel would be the obvious option at left back while Laurent Koscielny will play on the right hand side with Mertesacker and Vermaelen in the middle. One of the FrimCoq axis should replace Song in midfield.

The Arsenal manager will be hoping for no further defensive injuries as the team looks to bounce back from Sunday’s defeat against Man City.

Is this for real? Poor kid he’s always injured. Well I think we need another leftback because we can’t really rely on Gibbs at all. It’s a real shame because every time I’ve seen him play he’s looked promising.

If I was Wenger I’d buy Vertoghen (and shoot Squillaci) , he can play as a left back,Defensive midfielder and Centreback .

But Wenger will probally promote that Angha Kid and maybe he turns out to be the world class . Wenger has never dissapointed in the left back position

Except for that cole cunt. He turned out to be a bit of a disappointment no?

@Frog Only in character. He’s past in now.

Jan Vertonghen is a center back primarily. Just as we’ve seen recently our game is hamstrung a bit by playing center backs there. We need more dynamic players like sagna who can support the attack.

That’s the point , He replaces Squid and not the injured leftbacks,because maybe Gibbs will be back and have his best years like RVP

Kieran Gibbs is our very own Kieron Dyer.

Oh well, at least we have Squillaci! I saw him in those training pictures, and he appeared to be laughing all by himself. Bless.

Wow Gibbs seems to be more injury prone even then Diaby, unbelievable!

To think we almost went without Santos. *shudders

Just me or does he look kinda like ET in that picture?

RB/LB situation. Don’t see beyond Sagna, Gibbs, A. Santos. Gambling on League One player and CB to play full back. The sale of a RB and LB over the summer meant we should have purchased players in similar position.
Season after season, we always have injury problems so how come there are no precautionary moves when there was several months to get things sorted over the summer? I know that’s the past but what are the chances of it happening again next summer?

We purchased both a lb and a rb over the summer. Why are there no precautionary moves to cover for four injured fullbacks? How many teams have more than four recognized fullbacks? How many do you reckon we should have? We’ve got 5 CBs plus Miquel three of whom can play fullback. You can’t blame Arsene for this. How can you not recognize Jenks as a good back up for Bacary? Before he got injured he was putting in very solid performances better than I remember from Eboue before he left us.

The reality is, with sagna we had one of the best and most reliable fullbacks in the world. It was the perfect time to get a youngster with potential into the squad to learn from one of the best at the trade. As far as I’m concerned it was a great move by wenger to get the kid ( jenks) in the mix. Nobody could have predicted 4 injured fb’s. As far as Gibbs goes, I’ve not been overly impressed when he’s been fit, and I’m surley not to enamoured with his fitness record. I guess what I’m saying is,… Read more »

@Frog I agree that Gibbs should be moved on. It’s not doing anyone any good keeping him the way he is. I felt during the summer that whether Clichy stayed or left we needed another fullback because Gibbs is just too unreliable. It’s sad because it’s his injuries that have set him so far back in his development not his own fault. I wasn’t “overly impressed” either just thought that he’d shown promise. Someone in the mold of Vertoghen would be nice then we’d have someone who can cover fullback and DM.

Why not we get a backup for Santos and loan gibbs to a lower team to help with his physicality and development. We need a creative mid and striker urgent or lets hope Chamack or Park can step up but we do not have that creative midfielder to do the job Fab used to do or Silva do for City. City only had the upper hand in the midfiend. If we had the playmaker we would have beaten them badly. I am not so head bend on getting defenders cos our CBs are managing great. The boss said sagna has… Read more »

In my phone it looks like he’s got a white french beard and looks like a 90 yr old man.
Does anyone know the movie ORPHAN?

We should really get rid of Diaby and Gibbs. Completely useless when both can’t seem to play more than a handful of games between them.

Is he available for the boxing day game? I guess not 🙁
gutted

The thing you’ve got to ask though is, how effective would he have been had he not had a set back? He’s not played since october and before that he was just back from injury. I hope when he comes back he can be eased back into the squad playing as second string to Santos, that way the lad doesn’t have a load of pressure on him.

Unfortunately this just one of those freak things that could only happen to us.

Hernias can be tough to come back from. Actually less surprised to read about this setback than some others (Wilshere, Santos)

I know it’s not their fault….but diaby & gibbs do my head in!

The set back just shows he’s not fully fit, it’s a real shame Santos is out for so long, we simply cannot afford any more injuries at the back! I mean Squilacci earning a recall is actually becoming an option!!!!! Gibbs is fragile which is a shame but thus far its a fact! So we need to be gentle with him & not rush him back but unfortunately we can’t afford to. So we just have to get the best out of him & if possible he completes a few games before he breaks down again & if we are… Read more »

*bear with me here*

he would feast from CJ crosses all day long. and the re-emergence of the near post flick on (HALLELUJA) would also suit his tall-man-kicking-defenders style of play

like i say, carrol’s a cunt not fit to wear the shirt etc etc just putting it out there, like

I like to think of squillaci as toto squillaci

it’s so much better than the reality

Should never have played Santos against the Greeks. Wenger wanted “to be fair to the competition” Fuck the other teams, Arsenal must always come first!

[…] As reported earlier, Gibbs has had a setback and there are fears he could miss another significant chunk of the season. With Andre Santos out until March following surgery it leaves Arsenal short of options at left back and the manager says a loan signing might be an option. […]

Our lack of fullbacks is hurting us, though its its rare to have all 4 out has got me thinking that arsene should consider tweaking his system to suit the players we have available. Considering we have an abundance in CB we could try a 3-5-2 formation with: Kos mertasrcker vermaelen arteta song Ramsey Walcott gervinho chamack van persie such a formation could give us a concentrated focal attack and also give chamack game time to get his confidence back and more to aim at from the wings. Chamacks aerial threat will also push defenders back giving vp and ramsey… Read more »

You need a very specific type of wingback to play it and I haven’t seen anything from Gervinho or Walcott that suggests it would be suited to them.

Good thing villa are shit… Amazingly, fatty Phil dowd booked song on Sunday (song has been booked in every match dowd has officiated that he’s been the referee).