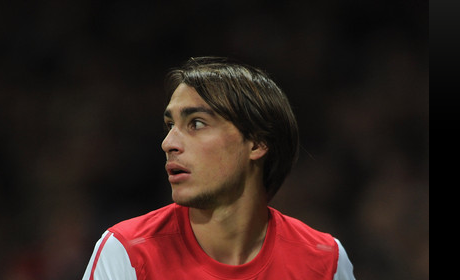 If Ignasi Miquel had been told at the beginning of the season that he would feature in Premier League games against Liverpool and Manchester City and also make his Champions League debut during the first half of the campaign then the tall Spaniard would probably not have believed it.

However, the reality is that Miquel, who spent time with Barcelona in his formative years, has now made nine first-team appearances for the Gunners, seven of which have come this season. Having impressed in both FA Cup games against Leyton Orient last season, he made an unexpectedly early foray into Premier League football in August when an injury to Laurent Koscielny, in addition to number of other defensive casualties, meant that he emerged off the bench against Liverpool.

He went on to start all three of Arsenal’s Carling Cup fixtures, turning in some impressive displays in the process, before an injury to Andre Santos saw Miquel handed his Champions League debut in the final group stage game against Olympiacos, this time at left-back. It was an opportunity that he seized, and he garnered further experience when replacing Thomas Vermaelen against Everton last week and Johan Djourou against City yesterday.

Miquel is currently benefitting from a dearth of defensive options, particularly in the full-back department, but is likely to find his opportunities restricted once Kieran Gibbs has recovered from injury. However, it is at the heart of the defence where Miquel is most at home, and it is at centre-back where he has turned in some imperious displays at Reserve level since joining the club from Cornella in 2008.

Appointed Reserve captain by coach Neil Banfield for much of last campaign, the tall defender has not turned out for the second-string with such regularity this time around, owing largely to his first-team commitments. If he is to succeed at Arsenal in the long-term it is likely that he will have to shake off the challenge of fellow centre-back Kyle Bartley, who is currently on loan at Rangers.

For now, though, Miquel is enjoying his time in the spotlight. There are still many aspects of his game that require improvement, such as an occasional rashness in decision making, whilst he is not the quickest player on the pitch, but the 19 year old is firm in the tackle and possesses impressive distribution skills.

Miquel has edged ahead of the isolated Sebastien Squillaci in the Arsenal pecking order this season, and, although he still has some way to go if he is to perform against the likes of Liverpool and City on a regular basis, his commitment hasn’t been found lacking when he has been called upon and the unexpected experience that he has gained over the past few months is likely to stand him in good stead for the future.

suddenly we have too many center-backs…I remember the days we were badly in need of a decent one. I hope he does will and stays at the club

He doesn’t look out of place at all in the games he played so far. Looks like a very good player to me.

He looks like he could become a really good player for Arsenal, there is only one concern though. Has the Arsenal medical team already checked if he isn’t suffering from barca DNA?

At the time Cesc was leaving he actually said “don’t worry, I wouldn’t go back to Barca, I owe them nothing”.

it was from real miquel..

To be fair though, the lad has come out with actual interveiws in which he talks about how Barca messed him around and he doesn’t much like em’.

‘If you ask me if I want to go back to Barcelona one day, then yes, it’s coming back home’

“Miquel has edged ahead of the isolated Sebastien Squillaci in the Arsenal pecking order this season.”

True, although so has Pat Rice, Vera the tea lady and Gunnersaurus.

The Gunnersaurus should be transferred in January.

Attasmani – I was sat behind the bench a couple of seasons ago when we first played Barca. When Puyol got sent off, Iggy stood up and applauded him, to make matters worse, his dad was waving a Catalan flag! It didn’t go down well and a load of abuse got thrown his way…..dna……

Nothing to worry about. His DNA will be too expensive for them this time round.
Plus if JW19 played for those cunts, he woulda been off his feet to applaud PV4. Just normal for a teenager

Expect him to start against Villa, I actually prefer seeing him at full back than Djourou. Koscielny was only caught out yesterday because of the sudden change. A game started with that defence is not to worrying.

Definitely our best-looking player. He is just beautiful!

I second that.. gorgeous 😀

with Miquel , Bartley and most importantly MARTIN ANGHA who is as impressive as any other hot sensation , currently among youth, Arsenal FC has a secured future…i hope….!

Wenger is a great coach, but now he must prove himself to be a great manager. He should go out and buy two full-backs this January.

Let’s just forget about Gibbs and Jenkinson: Gibbs is always injured and just can’t be relied on, and Jenkinson is not get ready for regular first-team football and should be sent out on loan next season.

Two decent full-backs who could slot in straight away – and who could provide defensive cover when Santos and Sagna return – are exactly what’s needed now.

Baines and someone else.

You need two good players in every position, no decent manager worth his salt will only have one world class player in each position and hope he doesn’t get injured, oh wait…

It’s not true about only “surplus to requirement’ players being available in the January transfer window. One of Wenger’s talents is spotting quality players who are not necessarily playing at the highest level. I’m sure he already has his eyes on a couple of players who could potentially be signed next month. Wenger’s weakness is sometimes not seeing what is bloody obvious to the rest of the world and stubbornly sticking to his guns. Gibbs is just a waste of time, he spends about 90% of every season on the treatment bench. And I like Jenkinson but he is not… Read more »

The only problem with getting players in in January, is that they need time to settle and gel with the team. That is why I’m always cautious about getting players in, especially as it’s an important time in the season. The right signing can make or break our season, which is made more difficult due to the best players being cup-tied. I’d certainly look at some of the spanish clubs though as some are swimming in debt (Atletico, Seville, etc…) and would proably happily bite our hand off for 7-10 mil to get the players off their wage bill as… Read more »

I am liking this kid, long may he stay at the Arsenal.

Seen him played on the tele against Man City in the league cup, Olympiakos and Man City in the league. So far to me he has been quite consistent and always seem to be in the right place and doing the right thing. Although going forward and passing are certainly his weakness, I look forward to see him develop into a great defender for us. 😀

On the off note, just seen those spuds commenting on the Szcz page. I’m surprise they can find arseblog but not Chris Foy 😛

He’s shaping up to be a great ball playing centre-half. He will need to bulk up over the next year or two. however. A brush from Balotelli or Yaya Youre would have sent him flying into the second tier of Etihad Stadium.

Considering his age, he has a lot of time to bulk up.

Doesn’t do anything particularly spectacular, but doesn’t have any Squillaci moments either.

Steve
Reply to  Bale the Chimp

As a CB playing as a FB what exactly are were hoping he’d do? Sprint along the touchline, burn the grass as he went and scored from 40 yards with his head?

dont forget that defenders mature later than attackers. just physically there are many aspects, and really good defenders play on their great experience. The kid is 19! its impressive what he has got going at the moment. Give him 2-3 years as a back up for Mert, verminator and kocielny and he will be the 4th musketeer. I think we will see him beat djourou in the pecking order within the next year.

interesting player and “young leader” of the reserves, he was captaining them for a long time. He’s got charachter the lad

What happens when all 6 defenders are at the club?

Awesome sure, but the youngsters are pretty impatient. I remember Miquel and Coquelin talking about leaving the club for more match experience. Let’s not forget we don’t have a defender who’s 30-yo or above (w/o Squillaci)