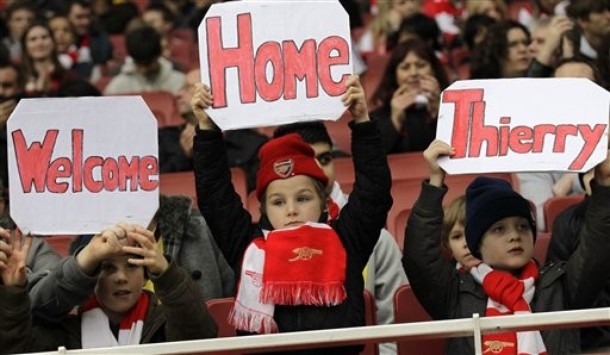 Thierry Henry is looking to Ryan Giggs for inspiration (not like that, pipe down at the back) as he reflects on his return to the Arsenal fold.

Available to Arsene Wenger until February 16th the 34-year-old is set to provide cover for the absent Marouane Chamakh and Gervinho, while the pair are at the African Cup of Nations, but stressed that supporters shouldn’t expect him to be the player of yesteryear.

Speaking to Arsenal Player after negotiations with MLS side New York Red Bulls were finally completed, the club’s all-time record scorer did make clear however, that he can still make a difference in the final third by using his intelligence and ability on the ball to help his teammates.

“I am not 25 anymore, I am not going to take the ball from the middle of the park and dribble past five or six players,” noted Titi.

“I remember Dennis [Bergkamp] and he used to be the main front guy. Suddenly he was playing behind the striker and if you have the awareness to see things before other players, you can get away with not having your legs.

“If you look at Ryan Giggs, it’s not the same Ryan Giggs who used to take the ball from the wing or from Denis Irwin and dribble past everyone and deliver a great cross.

“But what Ryan Giggs has is that he can see the game, he is always available, he puts himself in a position where he can receive the ball alone – then you will never lose your touch. That’s what I am going to try to bring to this team if I ever have to play.”

Can we get Bergkamp back now too?

fucking hell, dennis irwin? he might as well have mentioned wilf copping

although to be fair, if he’s trying to lower expectations to reasonable levels, mentioning bergkamp is a bit like trying to put out a fire with a handy can of parrafin

RomfordPele
Reply to  the only sam is nelson

Haha! Denis Irwin was a brilliant all round defender to be fair. A great FK taker too.

Due to his experience, his positional sense will be a lot higher and really all we need is a striker to put the ball into the back of the net. I’m sure he’ll still remember how to shoot, where to shoot and when to shoot but won’ve have to run around a lot.
I still think we should go to a 4-4-2 and play RvP in the Bergkamp role, only he’ll be a bit more mobile and we can move seamlessly into a 4-2-3-1 with van Persie in the hole

THE KING IS BACK!!!! I guess he’ll be playing behind the striker then. THat’s cool.

Should be playing alongside Szczesny

Not sure if you’re allowed 2 ‘keepers at once….

I’m sure he can handle himself…

What happens to our shape with TH??

I dont know how i came here, but this blog is just g*y. ryan giggs is a legend unlike ur little man who ran 4 money. + nice blog, truly describes u guys well

Giggs hahaha he only managed to get mentioned after HENRY left.

Or a player who was wanted by the current champions league holders that, at present, have also beaten your “legendary” team each time since… but don’t let that mist up your rose-tinted specs

anything come out of arse is absolute crap, but i am not here to argue with idiots. Ryan giggs will tear u apart again if u arent in the championship next year. lol. 8-2 i think was the score last time

A) The player you’ve put as your name is CANTONA and not CANTONNA, as in Eric Daniel Pierre Cantona.

B) Not quite sure you even know how it works or have seen a football league table since the first game of the season.

EUROPA LEAGUE CLUBS OUT OF HERE!

The only thing that Giggs can tear apart these days is his family.

“I don’t know how I came here?” Nope neither do we, you can fuck off now. Cheers!

Nice job with the spelling of CANTONA..now run along..

who’s Cantonna? Why don’t you learn to spell your own players names right before coming on here to insult us.

You are a dick.

This blog is for Champions League club only please so Man Utd fans and Tottenham fans can you kindly make you way through here;

Man City fans too should use that link, lest we forget…

So we’ve only got him for about 5 weeks then. ‘If I ever have to play’?? Bloody hell, I hope he is going to play, at least be on the sub’s bench for every match. I hope Wenger hasn’t told him he’ll only play in emergencies, that would mean we’ve effectively added no one at all.

ahahaaha i knw how to spell, this my own unique pseudonym. anywayz dnt talk shiz bout giggs. 1999 fa cup.

the only sam is nelson
Reply to  CANTONNA

78-79 fa cup, 04-05 fa cup (we beat Manure in the final of both)…. what’s your point? That Arsenal offered Sheffield United a rematch due to a controversial goal, something Utd would never do? or that Manure are yet to beat Arsenal in the final of the fa cup?

http://youtu.be/f7sYSEOm4dE – I remembered this top 5 Arsenal goals against Man U thanks to the troll. #1 is definitely my favourite…

cuntonna,I think you’ll find your type aren’t welcome here…go and bother a Newcastle or Blackburn site you mouth breathing cretin,you have no understanding of English or football.
Thanks.

We won the league at your place in 2002 son. And we only needed a draw!!! LOLOLOLOLOL 😀

Like Beckham, Thierry oozes class/skill. So maybe he lost a yard or two of pace, with the passing ability he has it really doesn’t matter.

It’ll be nice to have a sub that can really make the opposition shit for a change. You can hear the Redknapp now (while allegedely fixing his tax returns) “ha here comes Chamakh, oh wait, fuck…” /facepalm

Thierry should not be covering for both Gervinho and CHamakh , he is only ONE. they should get Robert Pires to cover for Gervinho…..or a young experienced winger will do

Thierry playing Dennis’s old role….?
Thus could be fun for a couple of months.

I know what your saying northern, but I’m hoping he gives the ox a chance!!!!

Man u- more fans in south Korea then Manchester.
Only club that doesn’t have a song for their manager.
And are led by a fat scouser who held them cunts to ransom until they paid him more. Now they sing his name.
Also, green and gold? Boycotting their American owners? That went well didn’t it.
Tits. Glory hunting tits.

Dnftt. Do not feed the troll.

What does that even mean? And how do you make those smiley face things?

Just do an emoticon symbol 🙂 😉 etc… Some work, some don’t.
I also think he’s trying to say back to the good old days but has changed good to god with Henrys arrival.
Now he’s a legend but Bergkamp is, in my eyes, a better player. You only have to look at his goal against Newcastle to see he was the most technically amazing player the English game has seen. He was definitely quality over quantity.

My emoticon explanation was terrible
: ) ; ) but without the spaces

Fuck off cantonna you cunt.
Why would you want to be on a gooner site anyway? Go on a citeh site if your trying to piss people off.
Or would you feel out of place on a site full of real mancs you two bob scumbag prick.