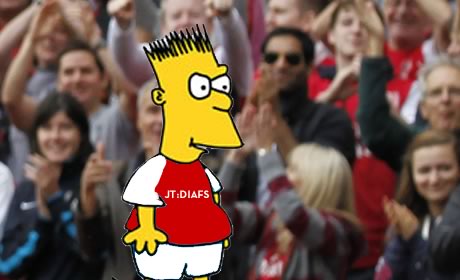 The FA have confirmed that a booking handed out to Thomas Vermaelen in the New Year’s Eve clash with Queens Park Rangers has been transferred to Laurent Koscielny after a case of on-pitch mistaken identity.

The Belgian was cautioned by referee Martin Atkinson in the first half at the Emirates after a hefty touchline challenge by Koscielny knocked a visiting Hoop out of play.

A statement from the FA reads:

“A caution for a foul tackle given to Arsenal’s Thomas Vermaelen during his side’s fixture against Queens Park Rangers on 31 December 2011 has been transferred to his Arsenal teammate Laurent Koscielny.

“This follows The FA exercising its right to request an Independent Regulatory Commission to review a case of mistaken identity.”

It certainly begs the question what would have happened if Vermaelen had picked up a second yellow in the game. As it turned out the auxiliary left-back was forced from the field with injury in the second half before we got a chance to find out.

If The FA would now like to give us the penalty for the foul on Gervinho against Fulham then we could have RVP down there to earn us a draw in a jiffy. Thanks.

Are they gonna repeal that yellow RvP got for “diving” now?

Sorry about piling on to the ‘first’ comment, but this is worth it !

Again with the downvotes?
When I first heard that smoking kills John Terry I chain-smoked half a pack. I’m considering switching to a higher tar brand to make sure that I’m really doing my bit to kill John Terry as soon as possible.

I hope that Koscielny never gets to wear a light blue football shirt!

Independent Regulatory Commission i didnt knew it existed. If those shit heads can setup the above for mistaken identity why not post match punishments or a review team for dangerous tackles and players who get away with just a yellow.
And do refrees really lack balls to claim thier authority themselves to cunt players and cunt teams i just for once wanna see a ref gather the team before the game lay out the rules to the entire players for every outrageous dive,appealing for card,and bombarding official for decisions against them will result in punishment.

i tell you what, in junior football we line up the teams before the game even starts and give them a speech about how the game will be run, why cant referees do that in the epl, might get the divers second guessing themselves if you say you wont tolerate it from the get go

Hard to blame the ref. They all look the same anyway.

Surely the number they wear is a clue?

Oh I don’t know why I bother.

Is it really that hard to recognise players with numbers and names on their backs, squad sheets and 4 bloody officials??!!

this is a joke right? i never knew cards could be transferred!

the only sam is nelson
Reply to  darshan

Eric Irish gunner
Reply to  the only sam is nelson

What does the dick mean

Can we give song a top with the name and number or Squilliaci? would that work as all our players look the same?

The card got transferred from one player to another, so…… yes

Anyone ever heard of the Independent Regulatory Commission before? Thought not. Strange how it manages to rectify this wrong at a time when Vermaelen will be out anyway and we have untolled pressure on defensive resources. Also odd that this august body didn’t see fit to apply an additional card to the scumbag Barton for grabbing Gervinho at Newcastle. Obviously when Barton does this, it’s not “raising your hands”.
Consistency? Anyone? Anyone?

True, and to think warnock said Barton would’ent of hit the ground and playact if it had of happened to him in his interview after the Norwich game, must of forgot the way the fucking scouse weasel acted after the gervinho incident the prick

Barton is a cunt.

In other news, the Great Dane has been arrested again

no, they found out he was arrested twice in september…not again…be fair to the guy and remember this:

or his goal against tottenham, his first touch in the game. Surely the guy is acting like a dick, but still, he’s one of ours still, so lets not work against the guy by licking up bad journalism

He stopped being one of ours when he started to shout his mouth off about our beloved and how he’ll never return to us, not ten days after moving on loan.

Maybe we should all remember his last kick of the game v Barca when he should have smashed it and taken us through to the next round??!!

Seems silly to say my god what might have happened had Vermaelen got another yellow in that game?! After all, had Koscielny had got a yellow he would have got away with being sent off. So really it makes no difference if the wrong man was booked.

If Vermaelen had committed another bookable offense, one would hope that the ref would be smart enough to let it go and give him a “warning” instead, considering he fucked up in the first half. Either that, or just given Vermaelen’s second yellow to Koscielny.

Now where is the FA statement that reads:

““A caution for a foul tackle given to Arsenal’s Thomas Vermaelen during his side’s fixture against Queens Park Rangers on 31 December 2011 by referee Martin Atkinson. Although we do out best to pick the oldest, fattest referees, this error was the most serious of a catalogue of others. We are therefore terminating his contract with immediate effect”?

Refs need a promotion/relegation system like the prem. There should be a scoring system and the worst 3 refs get booted to the 1st div while 3 get promoted to the prem (should really happen across all divisions) I believe this would lead to better refs & give young refs a better opportunity with an emphasis on talent rather than having to kiss arse to enter the club’

Last month referee-ing has been nothing but a joke to the whole league. Offsides that are not offsides, red card that are not red card and etc.The FA are really useless.

O the English FA. what a joke.

Not being funny, but shouldn’t Koscielny have owned up when it all happened? Imagine how he’d have felt if TV5 got sent off!

But you can’t speak to or question the referee…..

unless you play for Barca

He did own up and the referee refused to relocate it at half time!!!

That’s because he’s not allowed to change a decision under FA rules. It needs to go through the FA themselves. Were you not listening in Arseblogs class again?

I think the biggest problem this highlights that there have been a lot of woeful refereeing blunders this season and the overall consistency of officiating through out the league has been piss poor. In any game which is highstake for any club basic blunders like this shouldn’t be happening

That incident on New Year’s Eve actually highlights a fundamental problem with the rules of the game. Apparently, the referee knew that he had got it wrong when he was informed by his assistants at half-time, but he was unable to transfer the yellow card himself because he was not allowed to. And had he needed to book Vermaelen again then he would have had no option other than to send him off. The rules should surely be changed so that a referee should be allowed to transfer the card himself, during the game, once the error has been pointed… Read more »

Common sense? Not from the FA, EUFA or FIFA.

They’d shit themselves that enacting such a practical and obvious piece of legislation would lead to goal line technology, video-reviewed decisions, etc etc.

Which of course might not be such a bad thing – but that’s why it’ll not happen. At least not until Sepp chokes on a particularly naughty vol au vent. The fat racist prick. Is he John Terry’s dad in disguise?

Yep, that’s true, but the worst thing about it is that the linesman was looking at the whole thing and didn’t say a word when he was booking the wrong player.

I hope there should be more vital laws guilding the referees. Mistake has now be a usual to them.

Since this season began the standard of the officiating has been absolutely shite, honestly normally it’s poor anyways, but do far this season it’s been a new standard of poor. they’ve really outdone themselves this year so far with the refereeing. utter rubbish.

Fatgooner
Reply to  Will

True. And we’ve suffered for it. Cast-iron penalties that we didn’t get at Man City and Fulham recently have cost us dear.

Totally agree standard of refereeing has been below standard this year but the antics of some players (Rooney,Barton,Pedersen etc) has made their job much harder.There is too much cheating and conning going on but at least the worst offender will miss the next 7 matches. They need support.Actions have to be taken that only the captain can speak to the ref.The return of groups of players getting at them is doing no good. They need more support from the 4th official/ touchline technology on instant decisions . They also need training in man management.The Adolf Dowds of the EPL need… Read more »

Let’s take this a step further, can the FA and UEFA transfer us some titles for all the laughable decisions in recent seasons?