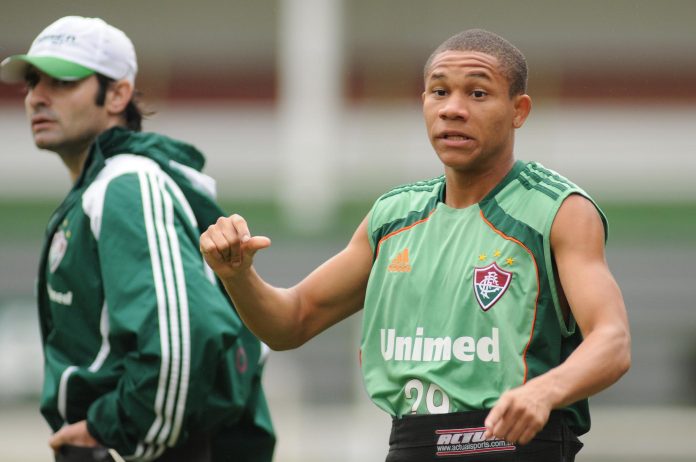 According to AS, Brazilian teenager Wellington Silva has been released from his loan spell with Levante and will now spend the remaining half of the season with Spanish second division side CD Alcoyano.

It was reported as far back as October that Levante were unhappy with the player’s attitude and that he would return to London in January.

Eager to ensure the young striker continues to play, it appears the Arsenal hierarchy have acted quickly to push through a further temporary move.

Wellington signed for Arsenal from homeland side Fluminense last January but has been dogged by reports about his poor behaviour with his love for pizza and Twitter coming under particular fire.

A statement from Levante can be read here.

I remember him being tipped to be on the same level as neymar ability-wise, its a shame that his attitude is a disgrace. Its insulting to me because unfortunately i never had his footballing ability but if i did then i wouldnt be doing what he is. Waste of talent and i doubt he’ll make it at arsenal now, i hope he turns it around.

Who gave you that tip? people over hyped him so much it’s unbelievable a couple of appearances for flunimense and suddenly he’s the next ronaldo? people need to calm down in their expectations of a players who haven’t even played a dozen professional games.

Doesn’t make it any less of a waste

The 4goals where scored past Norwich in a youth friendly. Admittedly all in his 45minute cameo. This is highly impressive of course but he didn’t single handily take the mancs down 🙂

Such a shame, such potential but it’s clearly being wasted. I’d rather we focus on forwards with a better attitude, as shown by Tevez it doesn’t matter how good they are if their only gonna screw you around

This kid sucks. We should sell him and use the money to buy Joey Barton.

AW will not be impressed. Get him to London Colney as soon as it can be arranged, the boss will soon sort him out or send him packing!

BTW, love the way the DM has to show a picture of a pizza so their readers will know what they’re talking about 🙂

Another £3.5m thrown down the drain by professor birdbrain.

People like you are an embarrassment to this great club. Wenger has forgotten more about football than you will ever know. His transfer record is second to none. Not even Fergie can touch him when it comes to the amount of transfers he gets right, and with a fraction of the budget.

The irony of a person called Mr. Finch reprimanding someone for calling Wenger bird-brained is hugely delicious.

Ajax that made me grin hugely.

Is it me or were Wellington and the OX separated at birth?

A classic case of a young lad who assumes he has made it to the very top and starts acting out like he is the greatest thing since sliced bread,(reminiscent of that great plank Bentley) before he has in actuality really started his football career at all. Fool to himself.

What’s the beef with Wellington?

Sorry. Had to be done.

I have my coat already, thanks.

I’d of sent him to Feyenoord after the excellent job they did with Ryo.

Or to Ajax and get the Iceman to sort him out!

Hopefully he can get more games at his new club and sort his head out, he is still very young and moving around as much as he has can not be easy at that age. Lets give the lad a chance and hopefully he can sort a permit soon.

I suggest we suspend judgement until we know him better. Get him here and start fresh. We don`t know if his reported attitude is a character defect, or a prolonged teenage tantrum. Among an establihed group of equally talented boys of similar age, might work the transfomation that we must hope for. Many lads find it difficult upon leaving home for the first time.

Agree. And if it turns out that he has a bit of talent but is also an uncurable wanker, we can always sell him to citeh for £25m, which seems to be the going rate for Arsenal trouble-makers with a little bit of talent

Great comment. Made me laugh out loud at work, which gives the game away when you are supposed to be doing something serious.

Lay off the kid. Yes, he has attitude problems, but this has got a lot to do with the fact he’s been taken away from his home by Arsenal, then not even been allowed to play in England, so has been parachuted into various European clubs where he’s been sidelined almost instantly. Those clubs taking him on loan aren’t going to babysit him or take the time to sort him out which is what would have happened if he were at London Colney.

The lad needs a permit to train and play here, then we’ll see what he’s made of. He’s got talent, there’s no question of that. Some players, like Ryo, are naturally hard workers and do the right thing. Others like Wellington are a little wayward and need a firm hand to guide them along the right path. That’s what this guy needs to instil a bit of discipline. The foreign loan system is doing the guy no favours.

Thats right clock end Mike, get him back to Mr Wenger the disciplinarian…

He needs to follow the example of Jon Toral who has shown very good attitude and commitment, now he is playing in the Reserves aged 16.

Jon Toral has EU passport and hence can play!
Wellington needs 3years in spain ( or a country with similar imagration laws, holland etc) in order to get a work permit to play competitive football. and yes reserve team games are classed as this.

Many, many incredible talents in every sport are/were a bit eccentric but still a joy to watch, and produced some serious magic…. and this may well be the case for Wellington.
I have yet to see him play or train, so I don’t want to make a judgement, especially when the only source of my knowledge has been fed to me by the media. I wait till I have seen for myself or until I hear AW telling us that he is disruptive and unmanageable. In Arsene We Trust!
So I will not join the media-driven populus and slate him without grounds for doing so.
Until then, I hope he finds a welcoming place where he can prosper and blossom before we benefit the many years of an extreme talent unleashed….

The chap with the 5-head has to sort it out though.

What? I am lost……
….. do I need to brush up on my lingo, or was this just simply not coherent for “proper speaking United Britain Chums”?

Anyway fellow Gooner, we may not understand eachother, but I don’t care, because at least we are on the same team!

Mental but i literally ‘LOL’d’ at that

Thanks, that solves my predicament…..It is me…… I need to brush up my lingo!

No, he’s just trying to make fun of Americans. Which is more than a bit stupid and disrespectful to the American supporters of Arsenal, when many of us likely know far more about the club than he does, and may have even been to more games. We’re all gooners here, I don’t really see the point in being a prick to certain sects simply because of their nationality, and especially when the jokes you’re making aren’t the least bit funny.

Well, didn’t someone get up to find their Mother sniffing their panties!?

It happens to us all, kid! The first time is always a shock… but after that you’ll be all “Really, Ma!? Agaaaaaain!?”

they’ll grow out of it.

Wellington is definitely talented. I wish Arsenal would send him back to Brazil. Let him grow up a bit and if he starts playing for the national team we can bring him back to the squad. Leaving him in remote corners of Spain are not going to help him. Look at our other loans to the Iberian Peninsula. None of them have come thru in the squad.

get your point….. Apart from King Henry…. we (involuntary) “loaned” him to Barca for a while…. and he has come back just fine !!! 🙂

Reality is simple kids, an adjective and a noun.
(now repeat in your heads until you start thinking about it)

Reminds me of Balotelli to be honest, but have some patience people. He hasn’t even train at Arsenal yet. Its not exactly buying a car when you buy young prospect like Wellington. We can judge him when he’s come to train at Colney.

Not sure why people are saying that Spain is bad for him and he should come to London, for a Brazilian player Spain is a lot closer to their cultural background than London. If he’s struggling there he’ll find it even harder in London, especially if he gets into the party scene like lots of young footballers do.

I’m sure Arsenal choose their partner clubs wisely, it’s beneficial for both clubs to have a happy player who’s performing well so i’m sure Levante would rather this didn’t happen.

Sometimes you just have to accept that certain people are just unable to adjust outside their comfort zone (hello Mr JA Reyes). Arsenal have a history of looking after young foreign players much better than most clubs so he can have no excuses really.

Spot on!
I had high hopes for the kid & hopefully he will sort himself out but Im not sure how long his contract is! Without playing he has no hope of getting a work permit, so at this rate he’ll never play for Arsenal.
we might have to count our losses on this one!

From what I’ve seen of him he isn’t that great a player, I have a horrible feeling we only bought him so man ure couldnt as they were sniffing around him a couple of years ago. As for his attitude I’m gonna say this once, Brazilian footballer in unprofessional behaviour shocker. 😉

I am sure we will bring him back and start playing him, save Wenger spending any money on Strikers!

Remember the old days of ‘Carlos Kickaball’.
If they come from South America they must be the next Pele.
These days it seems they are more the next Denilson.
P.s. I still hope I am wrong and he makes the grade.

@gloryhunter I think he can apply for a Spanish passport after spending 3 years accumatively in Spain. At the end of the season it’ll be 2 years. One more to go, I guess after the third year we will make the decision on him.

Anyone of you loveyi Limey son’s a’ Mama’s know if King ‘Lenny’ Henry is in line for a starting position in the team against The Welsh Swan’s?

Give Wellington the boot. Wahaaaaay!

Pedro Botelho arrested for traffic offences in Spain | Arseblog News – the Arsenal news site
Click to flag and open «Comment Reporting» form. You can choose reporting category and send message to website administrator. Admins may or may not choose to remove the comment or block the author. And please don't worry, your report will be anonymous.

[…] been a bad week for Arsenal’s on-loan, Spanish based Brazilians. La Liga club Levante declared Wellington surplus to their requirements last week and he’ll spend the rest of the season trying to get a game for CD Alcoyano in the […]