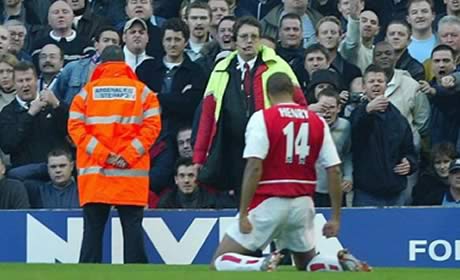 Thierry Henry is hoping that Sunday’s North London derby can provide a ‘spark’ to this Arsenal team as they chase that much coveted top four finish.

It’s nearly twenty years since Sp*rs did a league double over us and after two successive defeats a good result is absolutely crucial, not just for the points but to restore some pride and confidence.

Speaking to the official site, Thierry said, “For years we have been used to being on top of T*ttenham, by a mile, and now it is the opposite. But this is the derby, which you don’t want to lose, and we need those three points massively.

“Hopefully it will be the derby that can spark the players, the fans, everybody at Arsenal Football Club. We’ll see.

“The league is going to be very difficult but the top four is in Arsenal’s hands. They have the squad, there is a long way to go, they have to play Chelsea at home, T*ttenham at home, Newcastle at home, Man City at home… it is not impossible.”

Meanwhile, Lee Dixon says that this is the most important derby in Arsene Wenger’s time at the club, but also believes that a big game might just be the thing to get the Gunners out of their current slump.

This is the most important derby in Arsene Wenger’s 16 years as Arsenal manager,” he said. “It comes at a very poignant time in the club’s history.

“When I was at the club, if we ever had a bad series of results the next game you want to be a big one because it gets your mind focused on what’s coming rather than feeling sorry for yourself.

“And there’s no bigger one than the north London derby at this stage of the season with so much at stake. So roll your sleeves up and get stuck in.”

Whatever else happens an Arsenal team that doesn’t get stuck in to the old enemy on Sunday would be the most disappointing thing of all.

We shouldn’t even have to hope they’re up for this one.

Don’t forget, you can hear an exclusive, in-depth interview with Lee Dixon on today’s Arseblog Arsecast.

Unfortunately I’m away for this one. Obviously an important game to win, but even if we do we need some serous follow through.

We’ve had the occasional lifting moment this season, but looking back they seem like rare islands in a sea of turd.

Hopefully if the importance of this game can impact the players, it will also go a little way to them realising a club like Arsenal needs them to bust a gut every week, no matter who we’re playing.

Bang on spooner. Win this then alls right with the world and then lose to Liverpool.
To many false dawns. Not sure how a win against spurs is classed as revitalising our season.
we still won’t win a trophy. I just don’t see 4 th place as reward for 60.000 grove fans and possibly the best away following in the league.

Who are we playing this weekend?

Let’s just show those cock-shirted, media-adored, arrogant cunts that the fuckers are just going through a purple patch under a manager who will leave them at the end of the season, and that the Arsenal will always be the top team in North London.

Come on, you gooners!

Can I point out that when that pile of shit last did the double over us, the second game was just days before our second cup final of the season and we played our reserves, so I don’t really count it as a double, and we beat them in the cup semi, bunch of miserable inbred cunts. My wife has the audacity to have her birthday on Sunday so has decided it would be nice to take the children to Cadbury World, I’m not sure my nerves could handle 90 mins against that shower so maybe it’s a blessing on… Read more »

Who’s Henry?
He sounds pretty great, can we sign him? Maybe we can get some ‘mental strength’ in the squad.

Eagerly anticipating a spurs cunt who coming up and questioning why Arsenal are chasing them in the table.

For some reason my heart says we’ll win this and then beat Milan.

I need a new heart.

Everytime a see that picture it makes me smile! HAHA spud cunts! COYG

Every time we play any team am always optimistic that we’ll win, but now am always praying that we win. Please God let us win our next game against spurs, on sunday. Amen.

I’m convinced we’re going to beat Milan 3-0, just to stress us all out a little bit more

the only sam is nelson
Reply to  Highberry

nah, it’ll be 4-0 right until the 94th minute when arshavin loses it before fellow sub squillaci volleys the resulting cross into his own net from the 18 yard line for own goal of the season

you read it here first