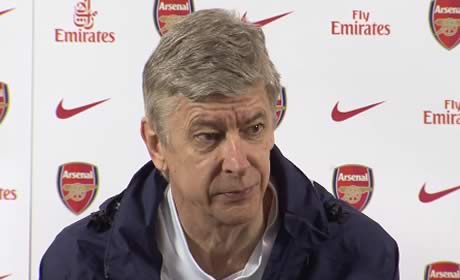 Laurent Koscielny and Kieran Gibbs both face late fitness tests ahead of Sunday’s game against Sp*rs, but Arsenal are hopeful both will be involved this most crucial of derbies.

Speaking at his pre-game press conference, Arsene Wenger said, “Koscielny may be back, and Gibbs. We make a decision about them tomorrow.”

However, Aaron Ramsey and Francis Coquelin both miss out with ankle and hamstring injuries respectively. It would suggest that Tomas Rosicky will continue in the more forward role in the midfield trio, while the whisper is that Theo Walcott is set to return to the starting line-up at the expense of Alex Oxlade-Chamberlain.

As well as the importance of the derby itself, coming as it does after two successive defeats, Wenger is focusing on the race for a top four place.

“It is an important game because we have an opportunity to strengthen our position in fourth place. Tottenham are doing well, so it will be an interesting game. Every game is massive now.”

The manager also ruled out any loan move by Zenit St Petersburg for Andrei Arshavin.

PLEASE BE BACK! We need as strong a team as possible.

Speaking of fitness and stuff BAE is supposed to be fit! Did he not supposedly have SURGERY this week?!

He did but is unfortunately winning his battle to recover. Adebayor and van der Vaart are also likely to recover in time….

please keep RVP fit for the rest of the season.i have a bad feeling arry has told his players to kick him.

I would play Ox on the left and Gervinho on the right. Walcott as sub. Then again, the boss will decide it. Will be a cracking match!

Lets hope it’s a real craking match instead of a 3rd game in a row with no heart. At least we’re playing on a proper pitch this weekend!!! GOYG!!!!!

No Ramsey…. oh no! All joking aside, I really hope GIbbs and Kos are both in the squad. We are gonna need to be defensively perfect on Sunday.

How on earth is Theo starting over the Ox a good idea?

How’s about we play AA23 in place of Ramsey in the midfield with Gervinho on one wing, Ox on the other and Song beside Arteta in the DM roles with AA23 playing slightly in front of them feeding RVP.

The NLD this Weekend
Reply to  Nick

NICK ABOVE: “How’s about we play AA23 in place of Ramsey in the midfield”

Stuart little is not strong enough to play in midfield, especially at the moment. He will lose the ball…. and then it will be an Aria of Sound “Why did Arsene do that”.

We all know he plays in that position for Russia.

The Ox will come off the bench at 65 minutes when Theo gets tired.

I love my team, but we have never won a game where the Referee this weekend has been charge of the game… I’m expecting a high scoring draw.

critic
Reply to  The NLD this Weekend

i think it’s time to bring out the champagne.

I would love to see rosicky finally net a goal against those cunts, he deserves one, deflected off adebayors face and into the net would be preferable

the only sam is nelson
Reply to  Cygan's Right Foot

cruciate ligament goes *twang* as tomas slides on his knees…

I think he’s going to go the same way as van Persie and now play for another 20 years, fitter than most and injury-free to make up for lost time

Gotta get behind the boys on Sunday & stop all this infighting with my life of Brian head on I propose we start the arsenal peoples front or is it the peoples front of arsenal with blogs as our leader! We will win!

Just read that Mike Dean is ref. I’ve abandoned the hope of luck getting us through the game following that news.

Looks like we’ll just have to put in a brilliant performance instead. Stranger things have happened this season.

Sp*rs start with a man advantage on arsenal. FUCK!

Gibbs 1 game then out two weeks and now needs fitness test. What was people saying about not signing a full back.

That he’s just coming back from injury and so will need a bt of time to get back up to full match fitness. Even Sagna isn’t there yet, has made some mistakes and needed a rest

Who cares if Ramsey is injured, he an average player…fuck the result, we want trophies………………..

Yes, “fuck the result”. It’s only our biggest rivals but that doesn’t matter….

How on earth are they our biggest rivals?

I really hope that is a rhetorical question. Have you only been supporting Arsenal for the last year or something? They are our North London rivals and have been since 1913.

I want to aim higher than rivaling spurs. I want whipping boys.

Rival or no rival, its still a great feeling shafting up spuds, smack their head around and putting them in their fucking place!!

We need this. We beat them and they are seven points ahead and they face united next? And chelsea very soon.
Dreams, dreams, they come true some times

Hooray!!! Ramsey isn’t starting! He looks like a chicken with his head cut off and can never push the ball forward. Always to the sides. Our build up play is too slow with him on the field.

Now is not the time for this.
As much as i hate it when he starts ahead of TR7 or yosi, i can’t understand how you’ld wish for an arsenal player to be out injured. He might not be good enough for a starter YET, but he got us out of jail in france and that stadium of mud.

I reckon there’ll be something of a surprise this weekend, someone like Ozyakup or Afobe will sneak into the squad; Ozzy has been in great form for the reserves and been pimped out on Arsenal.com. I’d be glad to have Rosicky in the team though, he’s been one of the few guys trying to drive us forward and his energy could be vital.

I’d like to give Yossi a run out in Ramsey’s place. Seems like he’s itching to get on the field at the moment and so would probably work his ass off

Maybe, I’ve always liked him but his performance against Swansea has forever coloured my perceptions, it’s notable that before that he was getting a lot more gametime so maybe I’m not the only one either. If we’re happy to play more of a 4-4-2 I’d play him off RvP, at least he can score the odd goal.

Koscielny is a worry.

I would play Wolcott on the left…side of the bench.

Go back to tot. Support our players. Even if they have patchy times

If Wenger plays Walcott instead of Ox against those mouth breathing inbred cunts,that would be a big coq up-in my opinion.

Support our players when they have patchy times. Even if the player is Sylvester?