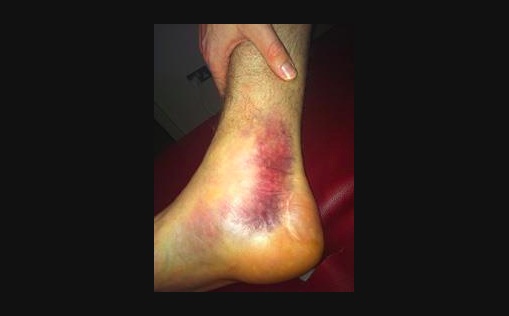 The bigger they come, the harder they fall – that’s how the saying goes. So when you’ve got a Big Fucking German in a crumpled heap it comes as little surprise that the damage isn’t pretty.

After catching his studs in the ‘turf’ at the Stadium of Light on Saturday, in an unfortunate incident which directly led to Sunderland taking the lead, Per Mertesacker took time out to post a picture of his injured ankle on Facebook.

As you can see from the above, it’s as good-looking as a Silvestre-Stepanovs hybrid.

Commenting on the current state of affairs, the German international confirmed (with what Arseblog News likes to think is his attempt at a Californian accent) that he was nervously awaiting the result of further examination.

“What a bummer. The foot doesn’t look too good and I have to wait for the physical examination. Right now I’m living with uncertainty…”

Already ruled out of Wednesday’s Champions League showdown in Milan, it looks as though Arsene Wenger will return Thomas Vermaelen to the centre of defence while offering the chance for Kieran Gibbs to play his first match since returning from two groin surgeries.

get a fucking planeticket too.

The Red and White Observer
Reply to  Tyrannitor

Dear Mr Mertesacker. May I take this opportunity to wish you well and I hope you return to the team very soon. There are children and some adults out there in the orb/ sphere who know very little about courtesy and civility. You play football for my team, and I must say I have seen a mark improvement in your play. The only true thing I can say to you is that this time last year (Feb end to be exact) a large majority of supporters were cursing Kosser, calling him names, some of which were not very kind; yet… Read more »

canis
Reply to  The Red and White Observer

Agree with the comment 100% but for my peace I mind I have to point out that the supporters are “lauding” Kos, not “loading” him.

Jeez, it was a joke people. Relax willya. I love the tall bastard.
Have you guys noticed, that every time he makes a mistake that leads to a goal, we end up winning the game?? Chelski away, Norwich away and now Sunderland??
Imagine if that had happened while Silvestre was here 😛

Wouldn’t call turning your ankle on a pitch that made Ypres look like a ground force success a mistake.

Feel for him but it’s the perfect time to get Gibbs back and hopefully it’s not a long term injury.

that’s some nasty bruising with signs of tissue damage at least. get well soon and make a Per-fect recovery! (*hangs head in shame*)

Hopefully it looks much worse than it is and he won’t be out for too long. Would hate for the season to go all Per-shaped off the back of this.

Please to God stop the pun thread now. I’ve never cringed this much reading through comments before.

I thought the jokes were quite su-per! 😉

come on it’s a Per-fect opportunity.

Gutted about this, he has been pretty solid recently and now we are only 1 injury away from Djourou or Squillacci starting which is not good news. TBH the pitch at Sunderland was a fucking disgrace and probably the main reason he is injured, have played Sunday league on better pitches than that.

Because Djourou play not as good as last season when he was our best center back (eg. we conceded 4 v new utd after he went off and squilaci came on) I think he deserves a chance to play. I am sure with a run of games he’d find his form.

The size of that foot!

Fuck. Feel sorry for his girl!

You know what they say about guys with big feet..

Must be a nightmare to shop for. Poor girl!

What, that they put their feet into girls vaginas? I don’t get it. Explain in detail.

Why FA allows Premier league football to play on that type of surface, its pretty awful.

Ouch. Under skin hematomas like that are almost always bad news. I’ll be a while before we see Mert back at 100% Per-cent for sure.

Per-haps it will turn out not to be as horrible as it looks. I am sure that by now the gods must know that they need to Per-mit us a bit of good luck. In any event, lets stay behind the team, never mind who the boss sends out there to play. We are at a bit of a Per-ilous point right now and we need to support the team no matter what. Per-sonally, I think we have done Per-tty well, given where and how the season started and where we are now.

Surprised no one’s been saying anything about the lead-up to the injury. Mert seemed already to be massaging and favouring the ankle several minutes before the turn and collapse.

This is a good point. It seems like he originally jammed his ankle about 5 minutes before he went down while trying to clear a corner.

I sprained my ankle a couple of years ago – the bruise was down a bit more but looked very similar, and that was a period of about 2 months before it was properly healed.

yeah, I got ACLsugery from the same surgeon that operated on an college football (american football) player that I knew, the difference was that his rehab was much better than mine and he was back in action much sooner than the year it took me before I could play football (the real one) again. I bet Frimpong will recover from his ACL injury much quicker than I did too.

In short, I would not judge his recovery based on your own.

When fit, he really gives us some centre back Per-mutations…

P.S. Did anyone else see the Ivory Coast manager desperately trying to get Gervinho to take a penalty last night? He was so reluctant, Kolo Toure took one before him…

Given our players habit of picking up foot & ankle injuries I’m pretty surprised the BFG has gone this long before suffering one. Lets hope he gets better soon, but as some have said that looks like it’s gonna take a while to heel. Sagna, TV5, Kos, Gibbs at the back 4… I’m not worried. Glad TV5 can finally get away from the LB position as he’s stated how unfulfilling it is for him to be forced to play out of the CB position. That’s the price you pay for being so damn good TV5! Hell with his shot power… Read more »

nothing a good rub with some horse placenta can’t fix in a jiffy!

I’ve had a similar injury and it took a good 6 weeks for me to recover. I think my bruising was slightly worse though…. But its definitely ligament damage, its pretty much ice elevation and rest until it gets better

This is a major blow for our defence considering the injury occurred on a shocking premiership pitch. Mert is our 3rd choice centre back so with Gibbs ready to return nothing changes for Wednesday as Verm and Kos will be in there rightful positions. Another defensive injury means Djourou or Squillachi back in the first team which is not good news as both are not good enough and will definately make mistakes. Fingers crossed…

I think Wenger moves Song to CB before he starts Squishy. I’m not
Too worried about JD, he was our outstanding CB last year and did reasonably well at RB. Of course eventually playing out of position tool its toll, kinda like when Arsh had to play striker.

could be any period of time from 10 days if it’s just heavily bruised, or up to 6 weeks. Hopefully it won’t be any longer than 3 weeks.
It is a shame that it has come at such a critical period of the season, as during the next month we have big games, which will determine how many competitions we’ll still be involved in.
Who knows, maybe it will be a blessing in disguise?, and he will get some decent rest ready to come back for the business end of the season.
Would rather have him available though. obviously.

Seeing the injury like that his ankle looks like a pound of badly wrapped meat. Such a shame really hopefully Gibbs can start playing again and we can move Thomas Vermallen back to the centre and still have a strong back 4

and we are back up there for a FA cup match next week!!

[…] disappointment though, as there pitch [which can only be described as mountainous] seemed to destroy Per Mertesacker’s ankle in the build-up to their goal. It would be typical of us to start dropping centre-backs just as the […]

You know, if our pitch was in the same state as Sunderland’s and one of their players tore his ligaments on our pitch, there would be a media-driven campaign against Arsenal. As Blogs mentioned, I think that it was far from accidental that their pitch was in that condition. O Neill had clearly done his homework from the Blackburn demolition, because every aspect of their game was oriented towards stopping us – playing deep, denying our players space, stifling creativity, man-marking Robin in packs of 4 or 5 – and their pitch really was disgraceful and is the cause of… Read more »

It is what it is
Reply to  charlie

Real talk……i’m sure our players are looking forward to their next visit to The Grove. Payback- the Arsenal way- is ALWAYS humiliating……XD

He must have watched the Barca game a day or two before and thought….”I’ll just let the mrs walk on the pitch”

no way gibbs starts the game, it would be his first game back from injury and its against milan!

Was I the only one whose mouth started watering at the picture thinking that it was a gourmet Spanish jamon leg of ham?

Enough of the puns. Per-lease.

Whilst it’s not on topic Per se, I don’t see any problem in talking about van Per-sie.

I hear his favourite song is Per-ple rain…