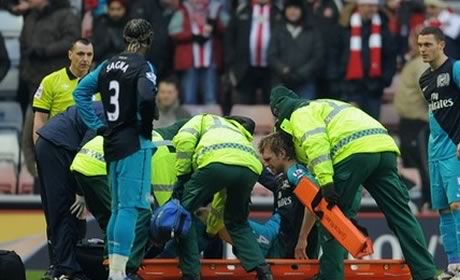 Per Mertesacker is out of Arsenal’s midweek Champions League against AC Milan.

The German defender went down with nobody around him during this afternoon’s 2-1 win over Sunderland, and Arsene Wenger says the centre-half left the Stadium of Light on crutches.

“It was unfortunate. Mertesacker told me that he got a shot in his ankle and couldn’t move at all anymore. We are a bit worried about his ankle I must say because he goes home on crutches. He has done some ligament damage, but how big that is we will have to check tomorrow.

“For sure he is out for Wednesday.”

Mertesacker’s injury took place just before Sunderland’s goal and while some will say the home side could have put the ball out, Wenger has no issue with them playing on.

Arseblog News can’t help but think that if the game had been played on a pitch worthy of the Premier League, rather than something that looked like a cross between a ploughed field and no-man’s land, the BFG would be all right this evening.

In this day and age there’s no excuse for a pitch that bad.

Get well soon BFG. . I bet he had a sneaky smile when king Henry got the winner. Its nice to know we will still have a strong defence for Milan though. A Classic win for a classy club.

my grandmom who knows nothing about football was watching her 1st football match of her life and she told the pitch was shit!that sums it all up

Too bad ref couldn’t give that pitch a red card like it deserved. Get well soon Pertesacker

Still this result must not under-estimated, a very good result. Henry’s finish was sheer class.

Their pitch looked like a thoroughbred track today. The Sunderland grounds crew better have it fixed for next week’s FA Cup match.

Do you think Martin O’Shit didn’t leave the pitch like that on purpose?

He is the ultimate hoove ball poodle, why would he need a good football pitch to play football???

Terrible pitch – how that can be tolerated is beyond me. I am irked when Wenger complains about pitches but i complained about this one within the first 60 seconds. Sunderland themselves couldnt play on it either.
Per has taken some stick this season but I no longer fear teams aimless punting it high into our box since we signed him. I hope he recovers quickly as I think he’s been great.

Getwell per. We luv u. Up gunners

I think O’Neill drunkenly laid down that pitch last night… It looked like a cow pasture after a stampede.

Stadium of Light?Hmmm…
Stadium of Shite more like,and o’Neill (the Irish Redknapp ) has the downright cheek to blame the ‘heavy pitch’!You really couldn’t make it up…and I’m sure the pitch will be like a bowling green next week.NOT…

What a pitch? Ie game plan between sundaland management and fans.looks like cows played b4 our game. Up up gunners

Why blame the cows?

I hope that one of Fergie top top poodle after Webb will sleep well knowing him leaving the pitch like that caused an injury to another player.

He said all that so not to blame for Per injury and to show he was not happy with the pitch too.

Thanks Henry for telling that poolde to shut up.

Its like the Man said, How can a manager blame his own pitch?!!!

Surely the pitch was bad but how bright is our away kit???
Felt for Mertesacker had already settled in but was starting to look more of a threat recently in winning aerial duels.
get well soon mert.

The away kit is TERRIBLE. Please. That kit is not conducive to winning football.
Contrasting colours are more visible than shades of one colour which looks like camouflage.
Yellow shirts with blue sleeves like Anfield 89 would be perfect.

It looks like cows played game on that pitch b4 our match. Any its a plann deal btween sundaland management. and ONIEL. Ie their game plann .it never work for them. Gunners 4 life.

It looks like cows played game on that pitch b4 our match. And its a plan deal btween sundaland management. and ONIEL. Ie their game plann .it never work for them. Gunners 4 life.

You can say that again.

Gibbs couldnt come at a better time. And maybe its time to give Coquelin more games in his preferred position if we have to use Song in central defense at some points.

Agreed, the pitch was like a potato patch, whenever a player pushed off to accelerate there was turf flying all over the place. The BFG ought to be getting a claim in against Sunderland

Get well soon Per, I hope you back soon for the run in.

Why would the English FA allowed games to go on such irritating pitch? What a shame ma BFG is injured, no thanks to some bald headed scot. Mtscheeew gunnerz for life

Why would the English FA allowed games to go on such irritating pitch? What a shame ma BFG is injured, no thanks to some bald headed scot. Mtscheeew! We should demand for that pitch to be repared before next weekend. Gunnerz for life

I would love to see Henry as a player/manager sometime in the near future.

He’s snapped something, poor bugger. Thought it was one of his best games for us up to that point. Get well soon big fellow.

Shame, he is just beginning to look comfortable to the English game. Get well soon BFG.

what did cokehead fowler have to say

He said per looks clumsy to him

“I am a complete twat who wouldn’t know a good defender if he kicked me in the bollocks” would seem to be a fair translation from the original Scouse.

Meh, Fowler always did fuck his lines up.

I think that’s the worst pitch I’ve seen since I watched one of Bosnia’s qualifiers. Horrible condition – wouldn’t be surprised if ol’ Martin had a hand in that..

Fuck off fowler you cunt!

Your sister is your mother,
your uncle is your brother,
they all f*ck one another,
the Fowler family!

Nothing wrong with the pitch. Nobody else fell over, only the big panicking donkey – twice. He’s slow and gets himself in trouble because of it. If you can’t see that you know zero about football.

hm sure, how would a german international with 80 caps know how to run straight without hurting himself…apparantly I’m lacking the footballing expertise to see that this was bound to happen because he is such an untalented footballer.strange then that I saw how the lanky klutz cleared a couple of crucial headers in the box …
get well soon merte

Look at the bright side, when he returns he will be LANS

Related question–when was the last time Vermaelen played centerback? I trust he still remembers how! :p

That’s the silver lining, for sure. I believe Vermaelen and Koscielny is our current best CB partnership, and we’ll finally get to see them play together.

Get well soon mate…we love you Per’

How can Sunderland be allowed to present a pitch like that? The goal and the injury are entirely due to the poor pitch. It would have been a complete injustice had Sunderland won.

, We`ll miss him against\ milan. We`ve been demanding experience and he has it spades, Gibbs back abrupyly for such a game worries me, The QPR, LB looked good yesterday. Pity we are skint, forcing M. Inerta to let him go! So unusual of himnot to notice hat just occasinally a player is injured – particularly young ones whose bones have not firmed uip. why didn`tPR tell him?

PS. I just figured why. If Pat took time to tell Old Ineta of e very b lue he makes, they`d be in conference all day1