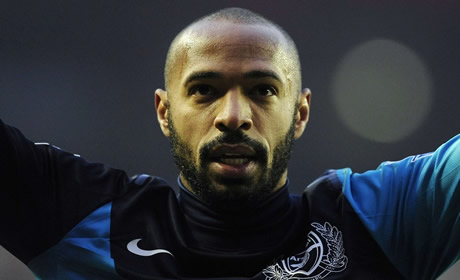 Speaking at his post game press conference, Wenger said, “He finished the story of the legend today in the championship; I hope he will add some in the Champions League on Wednesday now.

“Certainly he got us the three points in a difficult game where Sunderland were resilient, well organised and tried to catch us on the break every time.”

Henry will return to New York Red Bulls after Arsenal’s Champions League knock-out game against Milan, and the manager is going to miss him by the sounds of things.

It might haunt me again because then people will say ‘why did he not stay?’ It just shows you as well that these players never lose it. Exceptional talent survives. You have that with Giggs and Scholes at Manchester United and Thierry here. It is just a luxury to have a player like him on the bench.”

As a measure of comparison, Henry has now scored three goals since January 9th. Fernando Torres has played the entire season for Chelsea and scored just four. And he cost £50m.

F*ck the yanks. We should just tell them we’re keeping him and that’s that.

A Yank
Reply to  JoeRandom

As a yank, I have zero problem with that.

A living legend. How sweet it would be to have him for rest of the season.

i personally think frimpong should have stayed and made a documentary on henry!!!what say?

And there were rumblings in some circles that this wouldn’t turn out to be a good signing. A goal to see off Leeds in the FA Cup, and clinch 3 valuable points? Yes, please, and thank you!

They need to release a new DVD!

Cheers to Henry! Yet again you have done us proud!

I’ve got something in my eye i swear :'(

hmm i always though of AFC as beautiful classy dame.

Our other players must learn what it is to put on an arsenal shirt from him.

I would love to see Henry as a player/manager sometime in the near future.

” Exceptional talent survives. You
have that with Giggs and Scholes
at Manchester United and Thierry
here.”
any chance that assistant coach at ajax being the next invincible to return?
*just dreaming here*

There’s quite a few clips of some extraordinary goals Bergkamp has scored in Ajaxs training sessions. I think it’d be the perfect signing.

Another magic moment from the legend – my all time fav Arsenal player.

Is it too much to ask for a cherry on top against Milan?

I read somewhere that Henry played for free for us. Is it true? I thought he was on 75K a week. What is true?

We’d be paying his NY wages

for gods sake
Reply to  arseblog

they are the scum and want everything cheap.

How does he have any New York wages right now? It’s the off season in the MLS. (Or at least it was until they started pre-season training recently.)

Regardless of whether or not we’re paying his wages for the Red Bulls, I certainly hope that he’s not playing for us for free. A man deserves to be paid for his efforts, and Henry’s efforts for us have been tremendous!

He’s being paid by the terms in his contract. He’s not paid in a lump sum of money. Off season or not, he’s paid his contract money throughout and over the contractual time period. Distribution, if you will.

Fucking love you Thierry, thanks for the new memories. Form is temporary, class is permanent.

They say never go back. Henry broke that saying.

He HAS to come back as a coach in the near future.

Sorry NY–you can’t have him back!

We’ve been lucky to see him, next generations will know about him by footages and numbers but it won’t be the same. They’ll never understand how we felt at his goal at Bernabeu, or when he equalized against Sp*rs when they scored with one of our men down, or his hattrick against Wigan at Highbury, or against Leeds at the Grove or whatever goal you still see like it happened minutes ago.

He made Arsenal FC history, and we were there.

Till next time (citation needed 😉 )

You cannot class Henry with Scholes and Giggs. Henry is in a league of his own.

Don’t know if it was the poor pitch but we created very little chances today and that worrying, but my god Henry still knows where to be when the ball comes into the penalty area. Pure quality

I remember having a discussion with a lad I played football with in 1999 about Arsenal and Liverpools respective new signings. I will never forget his bold statement that ‘titi camara will prove to be a better signing than Thierry Henry’. Think he got that one wrong a bit. Thanks Thierry.

I find that the word ‘Legend’ gets thrown about to easily in recent times, feel that people don’t appreciate how deep the word actually is.. to me a legend is something everyone knows of, whispers of, something that everyone would give their left arms to see.. and Henry is the definition of the word. What a man! Will always be indebted to him for blowing the roof off Highbury & the Grove over the years. Thank you Titi! ps. Love how he said on the bbc interview, paraphrasing, ‘if they ever need any help, i’ll always be around’. See you… Read more »

What if Titi does something terrorist-ish? Then the Yanks will put him on the black list – problem solved. He’ll never go back to America.

Get someone in the club to stuff his luggage full of drugs. Sorted.

Yeah, maybe Squillaci could finally have a proper role at the club. The the-man-who-prevents-Henry-from-leaving man.

“It’s a shame a player of that quality is not in Europe or in England anymore but he does a lot of football in America” – Wenger on BBC. I rest my case.

Someone steal Thierry’s passport and visa! 😉

Henry, theres nothing I can add about you that wouldn’t be repeating u guys here, legend

Shame to compare him to Torres, don’t insult the legend that Thierry is.

He was a legend when he left the first time. So what is he now? A god? Can’t believe how amazing this man is. I feel really emotional about him because at times these past many years it feels there hasn’t been a single player at the club proud to wear the shirt. He is, and I love him for it. I guess the other reason this has been so emotional is that since he’s left, we’ve gone through some painful rebuilding, with no success, and nothing but abuse from both inside and outside the club. Seeing him back at… Read more »

Thierry Henry is a legend. I love the feet he scores with. I love that such a legend of the game is an arsenal fan. I even love his left hand, which scores the odd handball goal. And i’m irish. Jaysus, he could’ve played GAA for the Dubs. Don’t be a stranger, Thierry. Home is where the heart is….

Can some tell us how we can keep him for life, from the yanks? He is a LEGEND truly.

Thank you Thierry and thank you Denis.

Slightly off topic: have you noticed how fat Arshavin now is? He must have the biggest backside since Jan Molby!

If he doesn’t watch out he will end up like me!

Henry needs to start going out with that Marion Jones the sprinter, move to London and start knocking some little THIERRY SPEED DEMONS OUT!

Cheers Thierry, you fucking legend in your own lifetime!!!

I love you Thierry!!!

people love players from a club he support but there are very few players who make people to support whatever team he plays.. Thiery Henry- the king made me to do so. TRUE LEGEND..