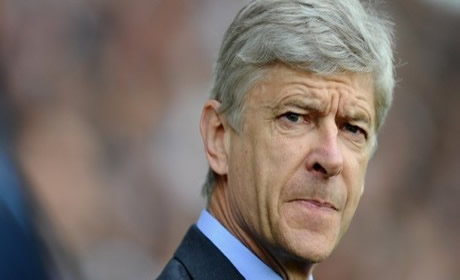 Having given his players quite the dressing down at the training ground on Thursday, Arsene Wenger is looking for his squad to react to the defeat in Milan by beating Sunderland in the FA Cup today.

The famous old trophy now represents Arsenal’s only chance of silverware this season and today’s game takes on even greater signficance in the wake of the midweek mauling.

Speaking to the official site ahead of the game, having apparently cancelled a pre-Sunderland press conference earlier in the week (pre-Milan it must be pointed out), Wenger said, “It is more important now. It was always important but, because we had a big disappointment in the last game, it becomes more important.

“We are in fourth position and we have an opportunity to qualify for the quarter-finals of the FA Cup. It is important that we are up for it and do not feel sorry for ourselves because of that [one] performance.

“It can still be a positive week and we will see how we deal with the Milan game in the second leg later. What is important now, first of all, is not only the FA Cup but as well the response and the mental attitude of our team. They are at stake as well. That is something that is very important for us.”

The manager also admitted that while there’d be a measure of rotation, due to some players who have played a lot in recent weeks, he’d be putting out as strong a team as possible, to try and win the game today and avoid either defeat or a tiring midweek replay ahead of the North London derby next Saturday.

“I will refresh a bit because some players have played many games recently. But we will be full-strength.

“Of course we will try to win the game, as we always do. If we have to go through a replay we will do it but ideally we would like to win the game in the first instance.”

Wednesday was hugely disappointing but we know this team is capable of better. Let’s hope they show it today to add a shine to what has been a pretty miserable week.

The reality is we’ve been poor all season and not buying any quality replacements for the likes of Fabrigas, na$ri and centre backs has proved to bite us right on the arse. With our defensive injuries and the fact we needed to buy defenders since the start of the 09 season means you can’t see us turning our season around. We are basically not good enough despite how Arsene attempts to rally the troops. With the welcomed return of TH, his last minute goals and the 7-1 at Blackburn these wins have only pasted over the cracks. And all of… Read more »

Come on boys, lets make it a drubbing. Win this, I think we’ll go on a run and finish fourth, lose, and I can see a repeat of last season *shudder*

AW wants the fans to stick with the team but if that rabble that went around against Milan the other night, where do the supporters”find the mental strenght” to follow them.
The fans must ” bounce back” “move forward” to our next game and forget their team played like shitte the other
night.
They must “strong”

In the picture it looks like he’s actually looking for a reaction.

Sorry…. They be “strong” and remember that they pay for top price to watch 3rd grade efforts. All we have seem to have done in the past 5 years is paint over the cracks, sell the cream and go out and buy budget buy lite. Some or a lot of our players are getting paid very well but not returning in kind and easy to say after a game” sorry to the fans” bounce back against Blackburn and then get hammered in one of our most vital games of the year. The answer is out there but who, when, where… Read more »

Looking around a lot of the forums following Wednesday night’s debacle, very few people have posted comments. I think it says it all really. We all know the problems, we all know what needs to be done to address those problems, yet we all know that nothing will be done to address those problems, so people are not bothering to comment anymore. last week I took my father-in-law to watch St Helens egg-chasers play their first game at their new stadium. They totally smashed the opposition, and the togetherness & passion & willingness to fight for the badge on the… Read more »

I bet your predictions wrong mate.

I agreed with everything you said up until i saw you bet against your own team.

What kind of a Gooner are you? Christ…

Man, don’t ever, EVER bet against your own club. Good times, bad times, you’re an Arsenal fan. Would you rather make a spurs fan happy to see us gooners lose faith? Humiliating defeats come for every club now and then, they cope with them and move on.

i cant even begin to count the amount of bets, accumulators, fantasy football points, etc, ive lost cus of our results.. when it comes to fantasy football its even embarrassing sometimes.. but not once have i bet against us.. that just goes against everything being a gooner presents. sort it out!

Oh grow the fuck up. Of course I haven’t bet against Arsenal, I’ll be there cheering them on & willing them to win the same as I have for the last 30 years.

Actually in an odd way Glenrock has illustrated an interesting point. We all complain about how bad we think thinks are with the board & management etc. but we still support the club & pay to see them regardless, which is exactly why the board will do nothing. The moment we start threatening to spend our money elsewhere is when they will start worrying, as the best way to hurt rich people is to turn them into poor people (Eddie Murphy, Trading Places :P) I understand people’s frustrations, we all share the same frustrations, some of us exhibit them a… Read more »

They deserved that dressing down. Now show us what you’re really made of Arsenal. I hope it’s not angel delight and rose petals.

I’m betting on a 2-0, hoping for a 5-0. Though I’m not sure the Djourou-Vermaelen duo will be able to keep a clean sheet. But however we play, come on Gunners!

Vermaelen to score today. Been a while since he has, and i think he’ll want to make amends for midweek.

Wenger has never been able to get a reaction from his players when they have had a setback like Wednesday night, look at last years CC final, the same thing happened when the Invincibles record was ended, It’s not the team it’s the manager that has the inability to boune back from setbacks.