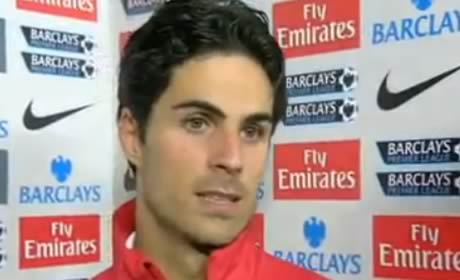 Mikel Arteta says that even in the darkest times this season, the players have been fully behind Arsene Wenger. Cries of ‘you don’t know what you’re doing’ rang around the stadium when Alex Oxlade-Chamberlain was replaced by Andrei Arshavin during the Manchester United game, but the Spaniard never had any doubts about the boss or his position at the club.

Again, from the interview with Sport Magazine’s Sarah Shephard , Arteta said, “Arsene knows that he has our support, and we know that he’s always been behind and protecting the players – it’s a mutual concept. There’s never been a moment like ‘what’s going to happen with him?’ or whatever. Since I came here I know who is the boss, I know who runs the club; it’s very clear.”

In recent weeks the Gunners have overhauled their North London rivals,  T*ttenham, who at one point had a 10 point lead in the table, leading many to loudly proclaim that the fabled ‘balance of power’ had well and truly shifted.

Arteta believes that singular focus has brought the team to its current position, three points ahead of the filthy dirty scummers.

“We got to a point when we had to say: ‘Listen, we have to go game by game because they are too far from us at the moment to be thinking we can finish third, fourth or even fifth.

“I think we were seventeenth in the table the first game I played against Swansea, so there was a long way to go but we’ve done it and everyone has put tremendous effort and belief into keeping going because, at one point, I was thinking the season was over.

“Now we just try to finish as high as we can. There is nothing else to play for. We’re disappointed that we dropped out of the Champions League and the cup against Sunderland, but we’re third now – and we have to try and maintain that because it takes you directly to the Champions League.”

And with the former Everton man now a key part of this Arsenal team, his drive to ensure that the move he made last summer would be the step up everyone thought will be crucial to cementing that third place position.

You can read the full interview in Sport Magazine

Love it guys like him have made the difference and given us more of a spine.

Arteta is the new “Go to” man at AFC for any sensible comments.Well coiffured
Articulate Arteta is not just a very good player but an excellent media man.
Twitchy at N17 could learn something by watching Arteta.

If he does that he might end up twitching to him.

True, no trophies left to play for, and while I’m not taking 3rd for granted [but surely taking a top-four finish for granted by now], I’m backing our boys (and men) for third. Would be nice.
Also, as crappy as this season started, it’s turned out to be my most exciting season as an Arsenal fan in the post-Henry years (I missed 07/08 for the most part: culture shock is a real thing).

@Jomo … We (who doubted him) are Arsenal supporters .. and we are jealous and protective of our Arsenal.

Supporter(n): Someone who actively supports a cause and grows jealous over its interests.

Fan(n): an enthusiastic follower, or admirer of a sport, pastime, celebrity.

Cool dictionary bro, I’m sure your ass must be very sore having pushed out that gigantic book out. supporter (n) A person who approves of and encourages someone or something (typically a public figure, a movement or party, or a policy). A person who is actively interested in and wishes success for a particular sports team. fan (n) An apparatus with rotating blades that creates a current of air for cooling or ventilation. A person who has a strong interest in or admiration for a particular sport, art or entertainment form, or famous person. while your ass’ definition of a… Read more »

Just think to yourself, if the managers at the 2 N London teams were switched would the teams still be in the same position.

No, of course not.

As with many here, I’ve had problems with some decisions AW has made (main one, last summer he apologized for) but he is the man.

Shame on you for condemning fans who dare to think it might be worth the risk of a change, after 7 years of AFC ending every season in the same place with the same unaddressed issues. Shame on you for your support of AFC being contingent on Wenger being in charge.

Off-topic, but who are your players of the season?

2-5 is pretty interchangeable though, they’ve all done almost equally well.

Sagna is up there with our best players but his injury keeps him out of the top 5 for me. Also, on parts of a season Chamberlin, Ramsey and Szczesny.

I’d also put Rosicky in top 5. He’s been having a real good turn around of performance. Probably tying with Song.

1. RVP (for his goals and leadership)

2. Sagna (if for co ing back from injury and drivng us forward especially with that goal v Spuds

Sczesny has had several matchwinning contributions. Udinese, AC Milan, Liverpool, and countless others. Not to mention being generally reliable.

The more I think about it the more I realise what a superhuman effort it has been to claw back 3rd from 17th.

I’m calling it now, Arteta will be the guy who’s out for the entire season next year, he’s too brilliantly awesome to stay fit for two years in a row.

He can still be all inspirational and stuff in the canteen though so we should be okay.

Even Wenger’s nastiest critics should have worked out that our poor start was down to three things: 1. Losing key players. First Cesc and Na$ri so late into the transfer window. In fact Na$ri hanging on until the very last moments did us no real favours. Then Jack got injured. Soon to be followed by (a) Vermaelen and (b) Koscielny. Later still our fullbacks started to disappear too meaning that TV5, when he returned, had to play out of position. 2. Bedding in the new players. 3. Sendings off – three in our first three Premier League games. Not exactly… Read more »

Agree with every word Eleanor. I would also add a disrupted pre-season with the trip to China as being a factor..

The reason for our poor start was: 1) Wenger did not address the Fabregas and Nasri situations early enough. i.e. sell them more than a week before the season began 2)Replace the above players with quality players 3) Get rid off lower quality players and free up cash to do the above (Denilson, Bendtner, Almunia, Squillaci, Vela, Diaby, Chamakh.) I know that Arsene is the boss and is well respected. The problem has been that the squad over the last four seasons has had real deficiencies. We are healthy right now and enjoying a good show of form but we… Read more »

Imagine Arteta eyeing you up from across the bar….I think I would shit my pants.

I dont know, as a package he is a beauty but his eyes are fucking terrifying!

it’s pretty clear both he and berbatov are vampires.

“balance of power”
Fucking impossible to shift that. Our side of the balance has several tons of iron cannon on it.
The other side has a basketball and a scrofulous parrot.

I’d prefer calling it a cock.

And you’d have to admit our Coq is much more sturdy.

Just read the full interview, and saw a picture of him put up there. The way he looks across the screen, piercing right through my soul, actually makes me fear for my heterosexuality.